What is the high temperature molar heat capacity of $\mathrm{CO}_2$ (carbon dioxide)?

In determining the heat capacity of a substance we just count the number of quadratic degrees of freedom in the Hamiltonian, right? Using that logic, for the linear molecule $\mathrm{CO}_2$ in a gaseous state I get: 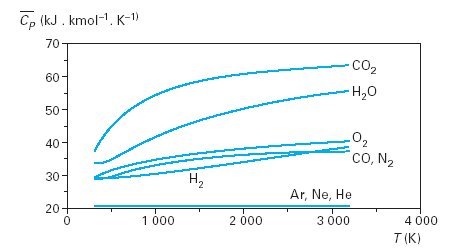 The only way that makes sense to me is from the second consideration - the bending mode excited states spread the mass out away from the ground state's axis of symmetry and so could have a non-frozen rotational excitations. The counter-argument to that is that a $90^\circ$ out of phase superposition of the bending modes looks like a rotation plus bending mode, so the bending modes should cover it.

I got the same results by applying the counting argument. From quite a while ago I found this plot 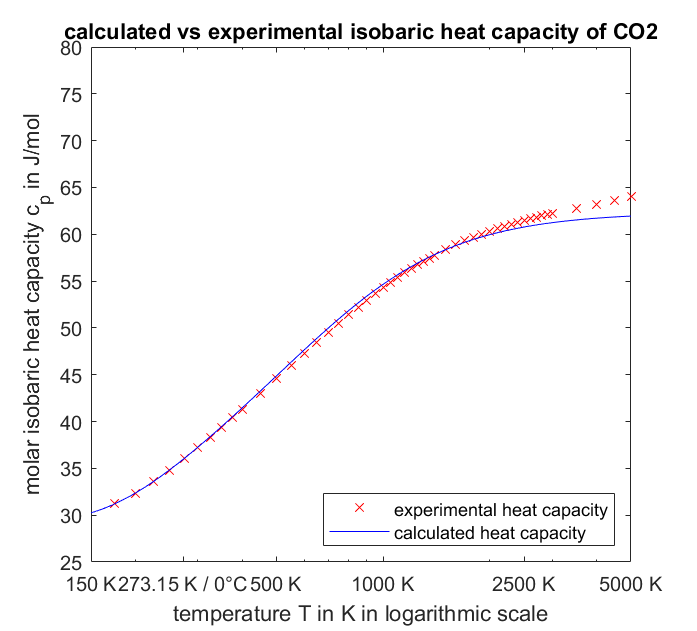 where the experimental data is from Rogers and Mayhew Steam Tables (5th edition). I recall that we explained the derivation for high temperatures with initially increased deviation caused by the anharmonicity of the vibrational modes, and then later on the onset of CO2 dissociation which increases the DOF up to another maximum.

Not the answer you're looking for? Browse other questions tagged quantum-mechanics thermodynamics statistical-mechanics or ask your own question.

2
Why gamma is not equal to 2?
0
What is the internal energy of water vapor? OR How many degrees of freedom does $\rm H_2O$ have?