Why did hot water squirt out of a squirt bottle when I placed it in cold water?

A curious thing happened today, and I can't figure out why it happened. 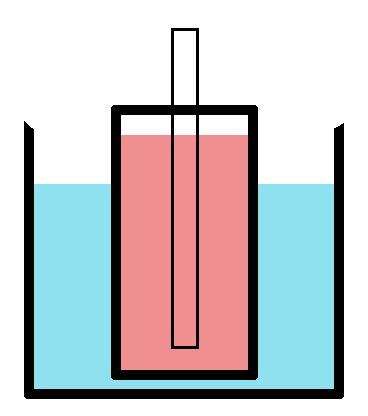 Why did putting the hot squirt bottle in cold water cause hot water to squirt out?

Suggest that the bottle itself contracted on contact with the cold water' causing the ejection you noticed. This would happen before enough heat had conducted from the interior of the contents to the outside to cool the contents appreciably. Remember that water has a very high specific heat capacity and would have to lose considerable heat before its temperature dropped enough for its contraction to be noticeable.

Most plastic bottles are polyethylene or polypropylene, which have coefficients of linear expansion of order $200\rm\,ppm/K$ (with ppm = "part per million" = $10^{-6}$). Volume goes like length cubed, so the coefficient of volume expansion is three times the length coefficient (one length in each dimension), about $6\times 10^{-4}\rm/K$.

Furthermore, when you put the hot water bottle into the cold water, the bottle cools off more rapidly than the water it contains.

Now the air in the bottle has the largest coefficient of thermal expansion: an ideal gas has volume proportional to temperature, and so room-temperature air has a volume expansion coefficient of $\frac1{300}\rm/K$. But while you're cooling the hot bottle, it and its contents are not in thermal equlibirium. It's plausible that, in the situation you've sketched, you'd have the largest volume change in the plastic of the bottle.

If we're talking a temperature change of 50C (hot tap water, but not scalding) to 10C, the volume change would be at most a fraction of a percent --- a few milliliters out of a one-liter bottle.

8
Why did my frozen water bottle explode when I opened it after it defrosted a bit?
8
Why is there water coming out of a car’s tail pipe?
12
Defrosting a chicken breast and the laws of thermodynamics?
4
Is it possible to prevent water from cooling by keeping it in an rigid container?
1
Weird sound coming from thermos flask
2
Why are higher frequencies amplified less by filling a bottle with warmer water instead of colder water?
1
Why does blending hot food in the Nutribullet blender create a "pressure seal"?
66
Why was water freezing almost instantaneously when shaking a bottle that spent the night outside during a frosty night?
0
Will water in a vacuum chamber become cold fast after being heated?
0
Why my glass spects or windows becone blurr in winter i.e cold weather due to my breath but NOT in summer i.e hot weather?and why disappear after?