Why is it that some things bounce while others don't?

Because bouncing requires the object to be elastic - shortly after it deforms, its shape should return to the one it had before deforming.

In order for an object to bounce1, the sequence of events would be following:

If all the above steps are passed, the object has to "un-deform" - internal energy gained because of deforming and not lost in the step 3 is turning back into the kinetic energy. Now it has its kinetic energy back, and thus has the speed to go up again.

In order to bounce, an object must "pass" all the steps above.

In other words, the objects bounces, if there is deformation and it's elastic, not plastic or viscous and most of the elastic potential energy is realised into acceleration of the whole object in the opposite direction.

Let's see consider three different objects - a rubber ball, a plasticine ball and a book, and see how they behave. 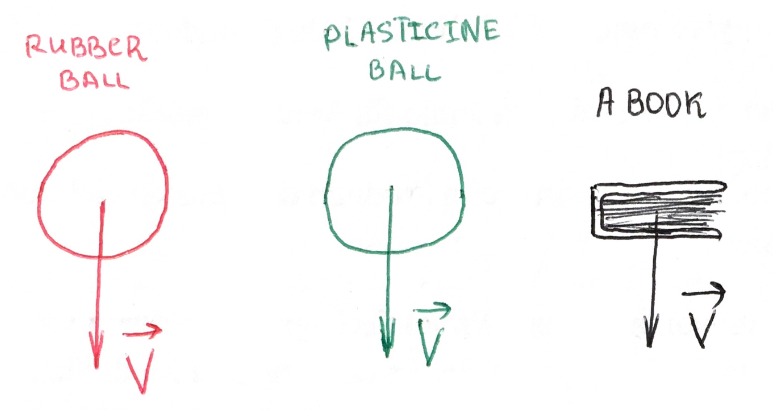 Well, any of them can pass the first step since they have got the speed. Now they will fall on the ground.

Balls pass the second step, they deform to a different degree. A book primarily fails to bounce because its shape favours other modes of energy propagation - dissipation via vibration. Thus, the book is not a contender anymore.

What about the third step? The plasticine ball fails it - its gained internal energy was mostly lost because of being transformed into thermal energy.

So, out of three objects, only the rubber ball will bounce.

As an additional example, you could consider the third, steel ball (not drawing it here :). It would certainly deform less than the rubber ball, but would still bounce pretty good.2

Adding to Nicael's and Dzuris' excellent answers, I thought it's worthwhile to go into greater detail about exactly why some elastic objects do not bounce in a place where rubber balls do. Note that all considerations here are fairly symmetrical: You can often exchange "floor" and "ball", or consider two balls. Which one is in danger of being plastically deformed is interchangeable; both must undergo exclusively elastic deformation.

A good example are steel balls. Watching Newton's Cradle makes it clear that steel is — somewhat counter-intuitively — elastic; very little energy is lost on each bounce. Nonetheless steel balls don't bounce well in places where super balls or ping-pong balls do, for example on tarmac or the hardwood floor of your living room.

The reason is that the "coefficient of elasticity" of steel is very high, meaning that you need a lot of force to elastically deform it. Long before the force is reached which would meaningfully deform the steel, you have a permanent dent in the hardwood or in the tarmac: the ball's energy has been used to damage the floor instead of elastically compressing the ball. It's important that a massive steel ball is heavy, generating the high forces which damage the ground. I would think (although I have never tried) that a massive aluminum ball would bounce of surfaces like concrete where a steel ball would not, just because the generated forces don't damage the ground that much.

Generally a ball will bounce if the material is elastic, and if the forces acting on the ground surface stay smaller than needed to plastically deform — i.e., damage — the ground. That is influenced by the following factors (in addition to having an elastic ball):

The falling object has kinetic energy. That energy will go somewhere upon impact. Where? That depends on the colliding objects (yes, it depends on both the object falling and the landing surface).

Sometimes the object will deform — throw a clay ball against the wall! Most of the energy is spent deforming the object and thus translated into thermal energy. Some objects even shatter.

Other times the floor (or table, or other surface) might deform. That's why nothing bounces on a pillow. That is why lighter stuff that loves to take on the deformation (rubber ball) will bounce on floor, but a rock will not (the energy will go into damaging the floor).

But sometimes the objects (or one of them) will deform in a way (called elastic deformation) that stores the energy in a reusable way (we call that potential energy). Think of it as a spring. It will change form and store that energy into the new shape, but afterwards it will regain (maybe just partly) the previous shape giving back the stored energy as kinetic energy. Thus the object bounces — the energy was stored during deformations and is given back. It can be the "floor" that does it (the trampoline example) or it can be the object (like a rubber ball).

Sometimes the deformation may be invisible to the naked eye — billiard balls doesn't seem likely to deform but they bounce well against each other as they undergo almost only elastic deformation. However, if you drop one on floor, it will not bounce that great: it will probably plastically deform the floor.

It's primarily about elasticity.

If you drop a rubber ball, then upon collision, it deforms. It stops being a perfect(-ish) sphere and starts being some sort of compressed sphere, for a moment. Then its structure reasserts itself, with the compressed end launching it back up like a spring.

But if you really want to bounce something that doesn't ordinarily bounce, then you can use a trampoline! It'll deform upon collision and then reassert its structure, launching otherwise-non-bouncy books up into the air.

What the currently most upvoted explanation by @nicael does not cover, and what I think is a question that the textbooks also ignore as far as I have seen, is why a steel ball does not bounce like a rubber ball, when thrown on a hard surface. It is neither because a steel ball in typical conditions will deform plastically; nor does it have a particularly high damping coefficient.

So where does the energy go? Well dropping a steel ball on a stone floor is a lot noisier than doing the same with a rubber ball. If either the surface or the ball has a low elasticity not much noise is generated; but when the speed of wave propagation in both colliding objects is reasonably well matched, a lot of the impact energy will be radiated away; the primary effect here being the excitation of the surface Rayleigh waves of the solids; which in turn leads to audible vibrations of the air.

That is, the steel ball isn't louder because the air gets disturbed more or much differently directly at the impact point compared to a rubber impact, but because the propagating solid surface waves away from the impact point will be more intense and exciting the air more.

So while the given answer is correct for books (they are very dissipative), quite a few things need to come together for a successful bounce, and a steel ball is quite a different beast.

Note that most collisions are elastic at molecular level, but inevitably become dissipative (to a different degree) at macroscopic level. A good illustration would be to take a large rubber ball and several smaller balls (to make up the same mass) bundled together in a bag. The big ball will jump as expected, while the bag containing smaller balls will not.

Not the answer you're looking for? Browse other questions tagged newtonian-mechanics collision or ask your own question.

5
Why do objects rebound after hitting the ground?
34
Clarifying the actual definition of elasticity. Is steel really more elastic than rubber?
18
Why doesn't Newton's third law mean a person bounces back to where they started when they hit the ground?

8
In tennis, why does topspin serve bounce higher than flat serve?
9
Why don't protons just bounce off each other in the LHC?
8
Why do sticky (like rubber) items slide slowly down a ramp?
3
Why does height affect bounce efficiency?
1
Why don't objects bounce infinitely?
2
Why can shade-balls behave as quick sand?
0
Work done on objects like chains
1
How can I derive a relationship between temperature and coefficient of restitution for a rubber bouncy ball theoretically?