Why were the sonic booms produced by the landing SpaceX side boosters audible on the ground?

Supersonic vehicles produce Mach cones behind them, which observers hear as sonic booms as they pass by. So if, for example, a jet goes supersonic as it heads toward you, but decelerates to subsonic before it passes you, the Mach cone will never pass your position, and you'll never hear the boom.

So how then was the sonic boom(s) from the SpaceX Falcon Heavy side boosters audible from the ground at all? Shouldn't the Mach cones have been directed behind the side boosters, up into the sky, meaning they'd never pass any point on the ground?

I don't have specific knowledge on this subject, I'm reasoning from general principles of mechanics here.

What happens as a device (rocket stage or aircraft) goes from supersonic to subsonic?

The Mach cone results from continuous production of more new shock front. It seems to me that as the aircraft slows down from supersonic to subsonic the shock wave that was last produced proceeds to overtake the aircraft.

(I've been using the expression "shock front" in this answer. My language is not precise here, but it's hard to see how to be more precise. I tend to use the expression "shock wave" for spherical propagation away from a source, and I tend to use "shock front" for a more compound propagation pattern, such as a Mach cone. These are not general conventions; I'm improvising here.)

Consider a plane moving left-to-right at $v$ faster than the speed of sound. At each time $t$, a disturbance starts radiating from the point of the plane. Just later, while that last bit of disturbance has reached $c_s \Delta t$, the point of the plane has moved to $v \Delta t$, a larger distance, and a new sphere starts to radiate. The tangent surface of those spheres provides the shock cone as they radiate together.

Now consider the plane just disappearing as it gets to $x = 0$ in the middle of your mental image. It's no longer radiating new spheres.

But all the old spheres are still there, and the last few of them are still propagating past $x = 0$. There won't be a new shock, but the existing one will continue to move out and to the right. It'll still be heard in parts of $x > 0$.

A more formal way to see this: The normal to the shock cone points to the source of the most direct excitation, and because of the cone angle it's pointing to a place "behind" the point of closest approach. See figure below, taken from Wikipedia with added arrow. 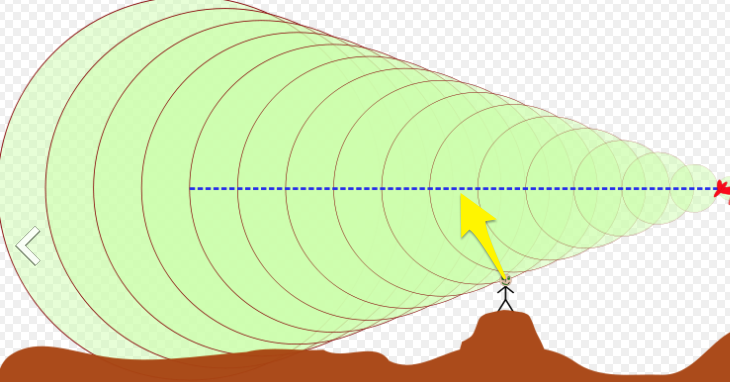 Not the answer you're looking for? Browse other questions tagged fluid-dynamics waves acoustics rocket-science shock-waves or ask your own question.

1
after the reentry of the side booster rockets of the Falcon heavy, why was the sonic boom heard?

1
How could you minimize sonic boom at the ground level?
0
sound waves hitting the ground
9
Is it possible to noise cancel a sonic boom?
2
Sonic Boom-Breaking the sound barrier
3
Which factors affect the frequency of a sonic boom?
6
What are the properties of a sonic shock wave?
1
after the reentry of the side booster rockets of the Falcon heavy, why was the sonic boom heard?
3
Physical reasoning behind hearing a single shock
3
Why is it a sonic “boom” and not a sonic “boooooooooooooooo…m”?