Impact of spacing between rectangular objects on wind force magnitude

Let's say we place an immovable rectangular object of an area X perpendicularly to a constant wind flow. The wind will now affect it with some force F.
Now we split that rectangular object into 4 smaller rectangles. Their total area is still equal to X and we mount them with a small spacing in form of a 2 x 2 grid. 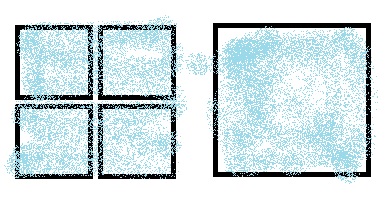 Will the total force F of the wind affecting 4 smaller rectangles with a spacing be different than the force affecting the big solid rectangle?
Please explain why or why not.

As the gaps between the small rectangles decreases, the structure will look more like one large rectangle with slots, which makes it more difficult to figure, but, at some point, the total drag is likely to increase in comparison with the original rectangle.

This article and the study it refers to gives an idea how slots and holes affect the drag in square plates. Perhaps similar studies have been done on slotted rectangles. Anyway, unless you are already an expert, it could give you an idea how to solve your problem.

Not the answer you're looking for? Browse other questions tagged drag aerodynamics or ask your own question.

3
Does the Magnitude of the Drag Coefficient on a Rectangular Prism vary with Rotation?
0
Finding the drag force (Air resistance force) for accelerated ball?
1
Constant wind drag while falling?
0
Why wouldn't the weight of an object affect the magnitude of the drag force on that object?
0
Calculating magnetic strength required to hold an objects weight + wind speed?
0
Angle of attack and lift: is there a model?