I asked a similar question here . But never received a complete answer.

So I've made the question more specific to DeBroglie waves.

So from what I've read DeBroglie waves are indeed standing waves within the atom, essentially storing energy in the state of a resonance.

Since the Bohr atom is wrong, there is no real reason to invoke DeBroglie waves to explain the atom. The current picture of the atom comes from solving the Schroedinger equation for the electrons in the relevant potential wells.

The de Broglie matter wave is a general concept that applies to to all matter and is not restricted to the innards of the atom. Just like a standing sound wave in a tube, the matter wave is restricted based on boundary conditions. The most direct analogy is the infinite square well, where it is enforced that the wave amplitude is fixed at zero at either "end". The difference here is that instead of having something mechanical enforcing the boundary, like a knot holding the string to the end of a tube, the boundary is described by the potential field that the matter wave is in. Just like you would solve the classical wave equation and apply mechanical boundary conditions to find the resonant modes of a wave on a string, you would solve the Schrödinger equation and apply the potential boundary equations to find the wavefunction - the function describing the matter wave.

A stationary state is not the same thing as a standing wave.

The wave functions that come closest to the deBroglie picture are "circular orbitals", states with large principal quantum number $n$ and maximum value of angular momentum $\ell = n-1$. When then $m_\ell = \pm \ell$, the phase of the wave function varies only as a function of the angle in the plane of the orbital. Here an image for $n=6$ where phase is coded as color: 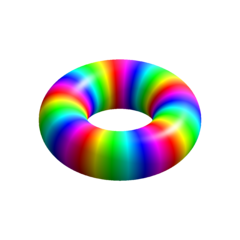 This is the time-independent part of the wave function. There are five deBroglie wavelengths around the circle, $\ell = 5.$ To get the time-dependent wave function, one multiplies with the phase factor $e^{iEt/\hbar}.$ This adds a phase that grows with time, so that the colors rotate.

Keep in mind that de Broglie didn't have a wave equation in mind, he just said,

"hey, if material particles can be regarded as having a wavelength like so ...".

Derby challenged Schrödinger on that point and in response he found the wave mechanics. So the closest thing you're going to find to an answer is the wave functions of the hydrogen atom, but those are not like the "sine wave bent around on itself" picture you find in many elementary books: they are three-dimensional and the usual visualization have value but always miss something.

Toroidal. Or should I say the topology is toroidal whilst the geometry is spherical. See Is the electron a photon with toroidal topology?. It was published in the Annales de la Fondation Louis de Broglie, Volume 22, no.2, 133 (1997).

I asked a similar question here . But never received a complete answer. So I've made the question more specific to DeBroglie waves. So from what I've read DeBroglie waves are indeed standing waves within the atom, essentially storing energy in the state of a resonance.

That's right. But you should simplify matters by thinking in terms of a free electron. See the Wikipedia atomic orbitals article. It says "electrons exist as standing waves". Kick an electron out of the atom, and it still exists as a standing wave. We don't call it the wave nature of matter for nothing. Don't forget that we can make an electron and a positron out of gamma photons in gamma-gamma pair production, we can diffract and refract electrons, and then when we annihilation the electron and positron, what we get is gamma photons again.

It's toroidal. But we're talking about a twisted spin ½ torus. See the blue torus on the Edinburgh TQFT web page. Only it's a torus that's so "fat" it has a spherical symmetry.

Sure. Think of displacement current literally. Imagine you're down the beach playing in the surf. A big wave comes along and you make a little wave with your hand that scoots up and over the big wave. You might think there's no interaction but the little wave was displaced. It changed direction. Imagine you can do that to a 511keV photon so that it gets displaced into itself in the guise of a 720° double loop, and then continually displaces itself. It's now in a "closed" path rather than an "open" path.

To get the gist of it start off with the spinor depiction and think of it as something like a flat twisted inner tube. Now mentally inflate it to a torus, then keep on inflating to a horn torus then a spindle-sphere torus. That then matches the S-orbital:

See Adrian Rossiter's torus animations and the S-orbital © Copyright 2010 Encyclopaedia Britannica. . But note that there are no actual surfaces. We are talking about a wave going around and around, that's all. It's a wave in space, and space doesn't have a surface like the ocean. See Hans Ohanian's What is Spin? Feynman thought it was absurd. It isn't. What's absurd is thinking the electron is a point-particle. Note what Schrödinger said on page 27 of his 1926 paper quantization as a problem of proper values, part II. About light rays influencing one another and showing remarkable curvature.

Not the answer you're looking for? Browse other questions tagged quantum-mechanics waves resonance spherical-harmonics or ask your own question.

1
Can a standing wave exist on a spherical surface?
1
Compatibility of de Broglie postulate with quantum mechanics and Bohr theory

1
Questions related to resonance/standing-waves and sound
1
In general terms, what key elements are necessary for resonance to exist in a physical system?
1
Can a standing wave exist on a spherical surface?
1
General conditions for a wave to be considered a standing wave?
5
Are there physics, theories that predict standing wave harmonic deviations in curved tubes?
8
Does plucking a guitar string create a standing wave?
2
Phase difference of a standing wave
3
Understanding resonance in a tube