Reflection of "phone screen" light in a window

I've noticed that the reflection of a phone (or computer) screen in a window (or other smooth surface) has distorted colors (towards red-purple or green-yellow), which change as the screen is rotated

You are possibly seeing the interference colors of a birefringent sheet in your phone screen. Many phone screens emit linear polarized light, but some phones have laminated glass on top of the screen containing a a polymer layer that is birefringent. A color pattern can be observed, because the polarization of a light ray is rotated by the birefringent layer and the amount of rotation is dependent on wavelength. Looking at the reflection of the phone screen in a window pane, at an angle of incidence of about 45°, is equivalent to looking through polarizing glasses at the screen. 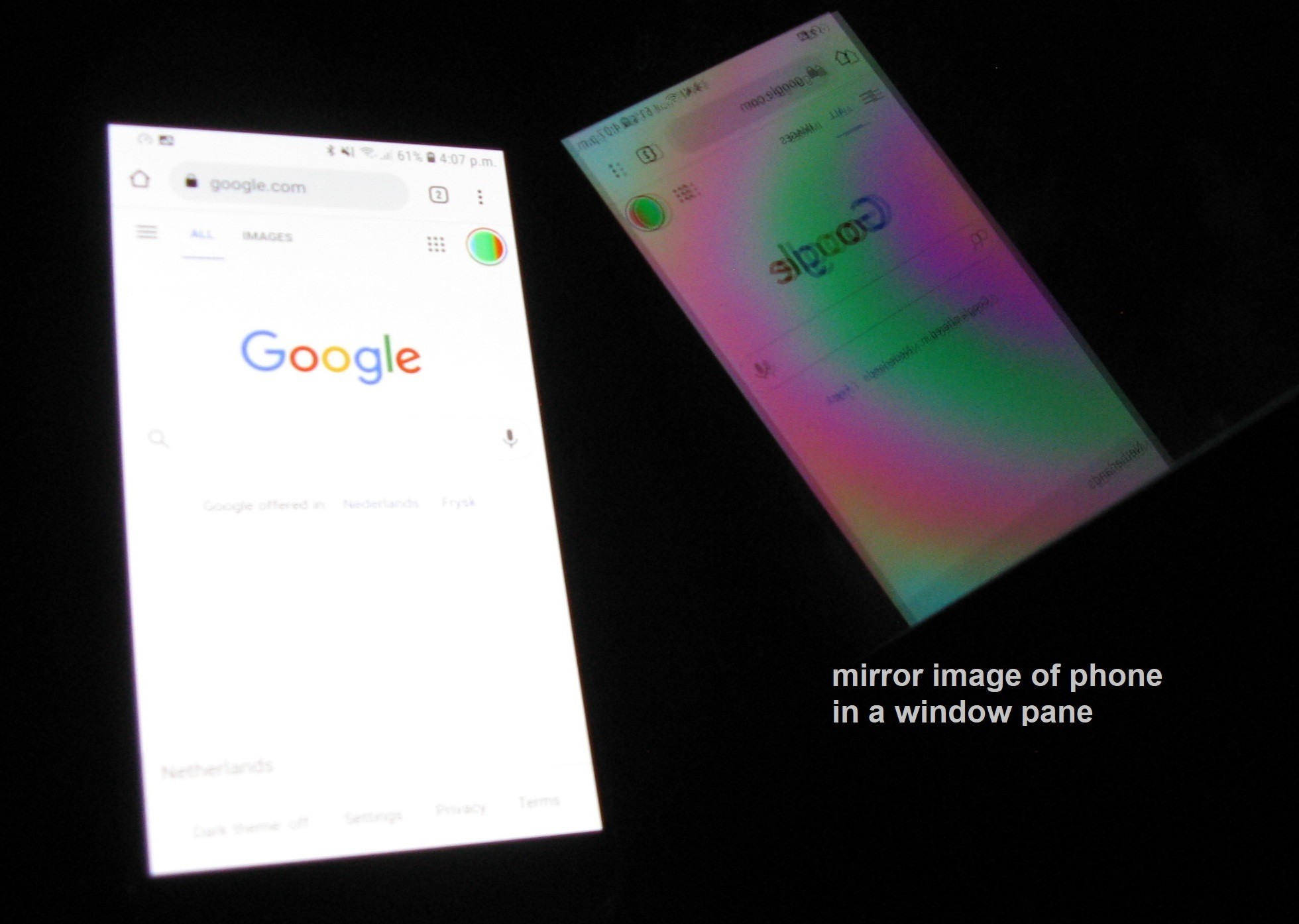 Purple and green colors in mirror image of phone in a window pane, as seen with with naked eye.

If you would like to test it on your phone, open an app that displays a white screen, and try to view the screen from very close to the screen, at a distance of just a few centimeters (the closer the better), while wearing polarizing glasses. As you already saw purple and green colors in a reflection of your phone screen, you will probably see an interference pattern like the photo below. It is characteristic for a biaxial birefringent layer. The colored fringes are called isochromes. The two bullseyes are the two axes of the birefringent layer. 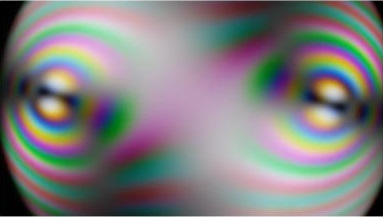 Colorful bullseyes pattern, due to a biaxial birefringent layer in the screen of a laptop, seen through polarizing glasses from very nearby. Characteristic purple and green colors. 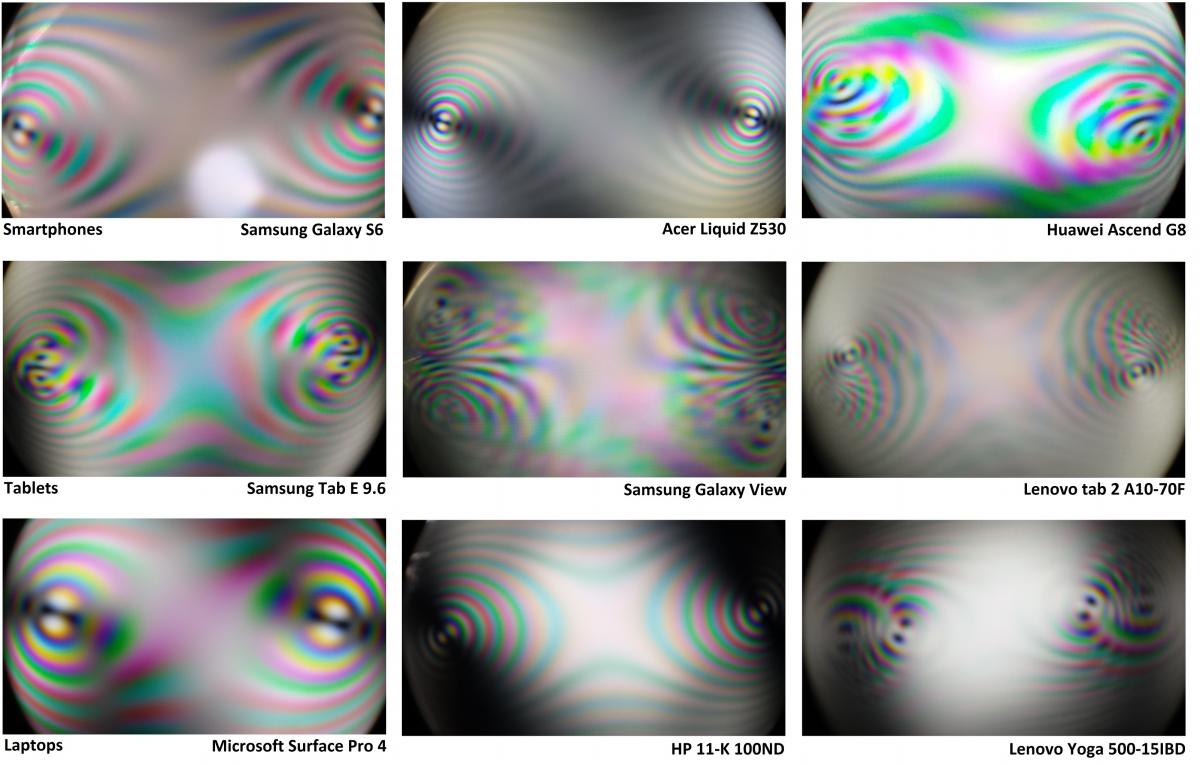 The bullseyes pattern can be seen on many devices, like these 3 smartphones, 3 tablets and 3 laptops. Photos from a few years ago.

Some phone/tablet/laptop screens have the birefringent layer; others don't, like Iphones and Ipads. My experience is that whenever the reflection of the screen in a window has these purple and green colors, those colors can be seen even better through polarizing glasses. To see the complete pattern, with both bullseyes and the isochromes, the field of view must be more than 90 degrees. Therefore the best point of view is very close to the screen.

A related observation: take a laptop with a linearly polarised LCD screen. Cover a part of the screen with a "screen protector" (crystal clear laminated safety glass) for phones. When looking at the screen through polarizing glasses, the bullseye pattern appears on the screen protector, and not on the rest of the laptop screen. 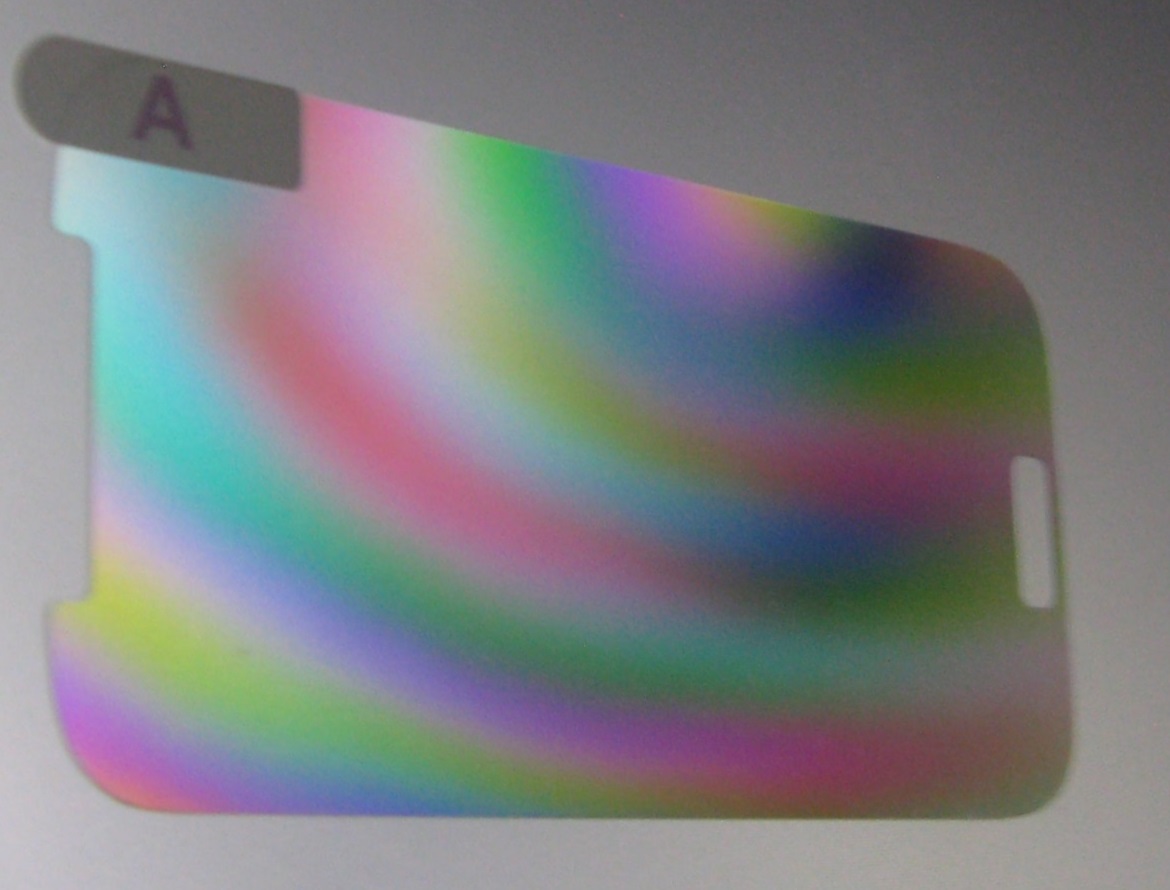 I noticed this too. My conclusion was that it's not because of the polarizers in the screen but the viewing angle. I am not sure about LCD screens but LEDs are focused in a direction and if you view it from a different direction, that particular color could now have lower intensity as compared to other colors in the vicinity and you'll different color. Or some internal component could be blocking the view of those particular crystals if viewed from a particular direction.

When you view a screen in a window, you are not viewing it from the front as intended but from an angle. This creates the color distortion.

2
What is this colored ring effect on my computer screen?

11
Colors from a computer vs. colors from visible spectrum of sunlight
0
The color purple in a rainbow