Suppose the situation shown in the following space-time diagram: 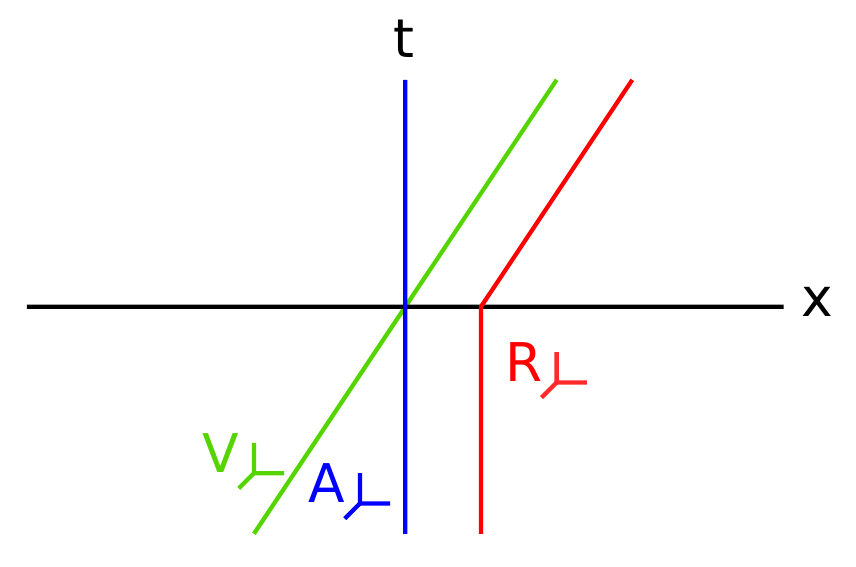 This diagram was drawn by the inertial observer standing in "the blue system", called A from azul in Spanish. In it we see the trajectory of "the green system" called V (verde) which, as can be seen, is also inertial. Finally the trajectory of an observer standing at "the red system" (called R for red $\overset{\cdot . \cdot}{\smile}$). This last system R is inertial everywhere except at $t=0$ where it experiences a short and strong enough acceleration that can be seen as a Dirac delta.

I wonder how the person in R would draw a space-time diagram for this?

I have tried to answer this question as follows: first I have added some "identified events" (events 1, 2, $A_1^+$ and $A_1^-$) in order to see how things change from the perspective of the blue person and the green one. Doing some straightforward math I arrived at the following S-T diagrams:

At the left there is the same S-T diagram as the original one but with the events marked down. At right the S-T diagram representing the point of view of the green person.

As can be seen each blue and green person is co-moving with the red one before and after the acceleration, respectively. The red person would have two space-time diagrams one for each tram of its trajectory, like in the following drawing? 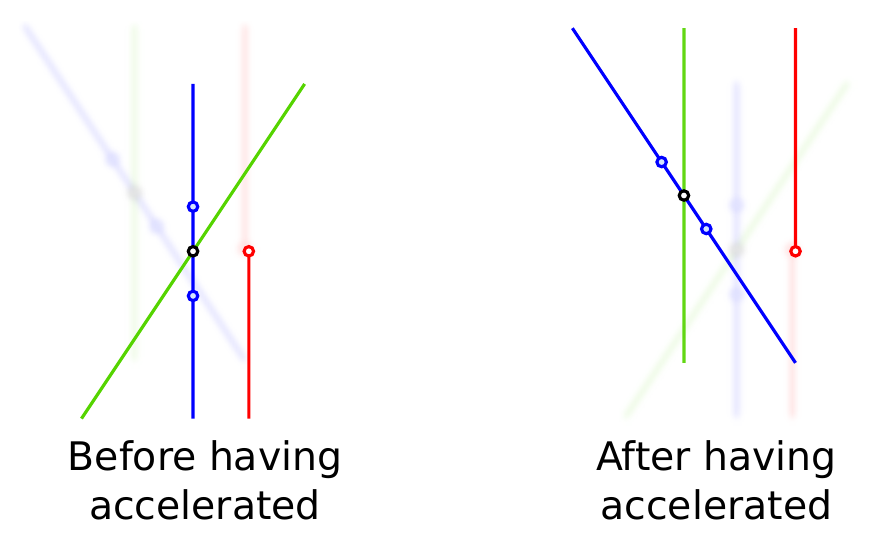 It really wouldn't work well to try to create a spacetime diagram that combines the use of $R_{\mathrm{old}}$ and $R_{\mathrm{new}}$ in one diagram, unless perhaps if you did something like plot two dots for each event, one for each of the two coordinate systems, in two different shades of red. It may or may not be useful to draw a unified diagram like that, in which almost all events are drawn twice.

Not the answer you're looking for? Browse other questions tagged special-relativity spacetime reference-frames acceleration inertial-frames or ask your own question.

1
Problem with Minkowski diagram for twin paradox
0
Transforming Reference Frames in Space Time Diagrams
0
What does the line of constant space time (interval) represent?
1
Relative simultaneity and time going backwards as someone accelerates
0
Is there an eloquent way of qualitatively explaining why the time coordinate of an event is shifted proportionally to its spatial coordinates?
0
What is the physical meaning of simultaneity if all space-time are zero to both moving and stationary observers?
0
Doubts about a simultaneity thought experiment
0
A question about space-time diagram