Why is the energy of quantum harmonic oscillator independent of its amplitude?

The energy of a harmonic oscillator with amplitude $A$, frequency $\omega$, and mass $m$ is

It is intuitive to think that the energy depends on the amplitude because more the amplitude means that the oscillator has more energy, and similarly if the angular frequency is high even then the energy will be more.

Now let's consider a quantum harmonic oscillator (QHO). The energy is $$E=\left( n+ \frac 12 \right ) h\nu \, .$$ No amplitude term is there! This is odd because, even if you argue that we are dealing in microscopic domain, we all can agree to the fact that, in general for any mass oscillating under some force, if we have more energy then the oscillator will move farther from its mean position and therefore will have more amplitude.

The relation of energy of QHO can't be wrong, where else the above conception of energy for an oscillator also doesn't seems to be wrong.

Remembering that for the classical case $$\sigma_x^2=\frac{1}{2}A^2$$ we retrieve the original relation in the quantum case as well.

Check the derivation at this link

One advantage to using a coherent state is that we can easily define the amplitude of the oscillation. The position and momentum expectation values are just $\langle x \rangle = \sqrt{\frac{2 \hbar}{m \omega}} \text{Re} \alpha$ and $\langle p \rangle = \sqrt{2 m \omega \hbar} \text{Im} \alpha$ where $\text{Re} \alpha$ and $\text{Im} \alpha$ are the real and imaginary parts of $\alpha$, and both are normally distributed about their mean values. Restricting to real $\alpha$ means the oscillator is maximally displaced (as $\langle p \rangle = 0$), and so we would associate the amplitude $A = \sqrt{\frac{2 \hbar}{m \omega}} |\alpha|$ (in fact this remains correct if $\alpha$ is not real). The coherent state is not an energy eigenstate, but $\langle E \rangle = (|\alpha|^2+\frac12)\hbar \omega$. Then we see that $\langle E \rangle = \frac12 m \omega^2 A^2 + \frac12 \hbar \omega$. The first term matches the expression you have in the classical case. The second term is the ground state energy of the quantum harmonic oscillator. It is $0$ in the classical limit $\hbar \rightarrow 0$, and it can also be consistently removed if you choose to by just shifting the potential down by a constant $\frac12 \hbar \omega$.

While one can attempt to recover the classical limit from the higher energy eigenstates rather than from coherent states, it is quite a bit less satisfying to do so, as the high energy eigenstates describe a particle that is delocalized on a macroscopic scale (with similar issues in momentum space) and which does not evolve in time, while a classical particle in a harmonic oscillator should be localized at a scale much smaller than the length of its oscillation and should oscillate with characteristic angular frequency $\omega$ (which is not the case in a single eigenstate, only in a superposition of multiple energy eigenstates). Since energy eigenstates only depend on a single parameter $n$, even for large $n$ where the spacing between adjacent energy levels is negligible the energy eigenstates can not describe a single classical state (which depends on both initial position and momentum), only the time-averaged phase space density of the state, whereas since $\alpha$ is complex (2 real parameters) we have a one-to-one correspondence between classical states and coherent states as we saw above.

I ask students in my modern physics classes to deal with exactly this question, but I take the approach of having them find the physical extent of the motion in terms of a probability distribution function for both the classical and quantum cases.

The text I used most recently reads (in part):

Comparison of spatial probability distribution of a one-dimensional harmonic oscillator between the classical and quantum cases.

A quantum mechanical solution to the harmonic oscillator (mass of a spring) problem is developed in Townsend in section 4.3 which gives \begin{align*} \psi_n(x) &= A_n H_n\left(\sqrt{\frac{m\omega}{\hbar}}x\right) \exp \left(-\frac{m\omega}{2\hbar}x^2\right) \,, \end{align*} where $A_n$ is a normalizing factor; $\omega = \sqrt{k/m}$ is the angular frequency of the oscillator; $m$ is the mass; and $H_n$ indicates the $n$th Hermite polynomial. These polynomials are tabulated in many places including Wikipedia.

And later I give them my computer plotted solutions for the cases I requested and a higher $n$ case: 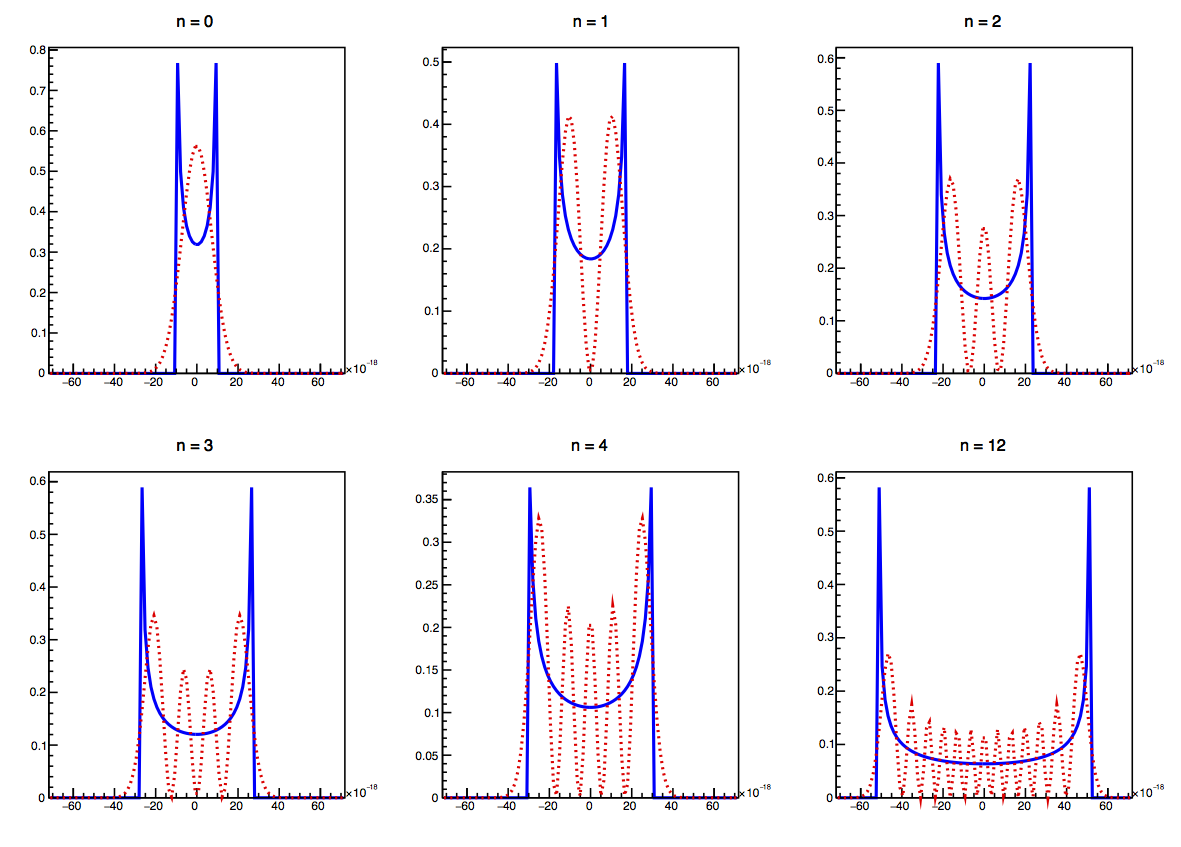 As you can see the spacial extent of the quantum and classical wave-functions track each other pretty well (there is, of course, some quantum penetration into the classical forbidden zone, but that is to be expected).

In the limit of high $n$ (i.e. macroscopic energy) these two cases approach each other very closely as expected from the correspondence principle.

Let's denote $A$ as $x$ while addressing this, as people usually do with the quantum simple harmonic oscillator (well, that or $q$ anyway). The full energy has a term you forgot due to the momentum, viz. $E=\frac{m\omega^2 x^2}{2}+\frac{p^2}{2m}$. In quantum mechanics, the states of definite energy don't have definite values for $x$ or $p$ (or even $x^2$ or $p^2$), although on average half the energy is due to each term. So the amplitude $x$ is a random variable; in fact, in the ground state it has a Normal distribution. (In higher-energy states, we must multiply the Gaussian pdf by a polynomial function.)

2
Why is the classical solution of an harmonic oscillator more like a coherent state than an eigenstate of the Hamiltonian?
0
What is the quantum mechanical turning point of the $n^{th}$ energy eigenstate of an oscillator?