I'd like to help use the following exercise to reinforce my understanding of some basic concepts of quantum states. Here's a picture of the setup: 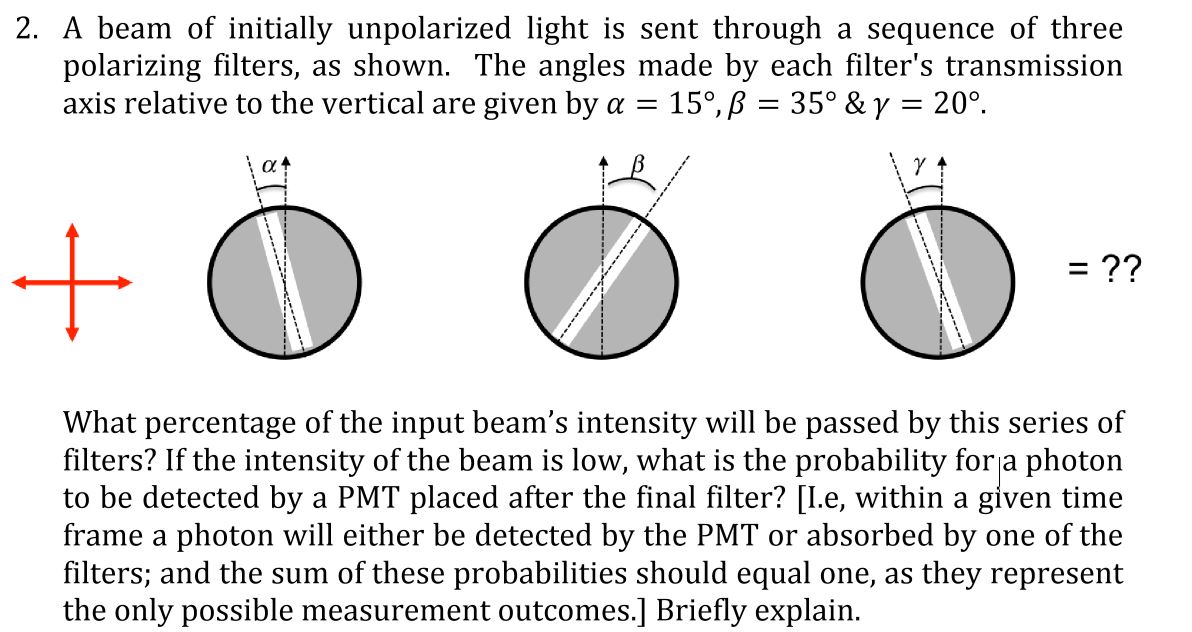 Now, I'll try and make my series of questions about the insights taken from this exercise as clear as possible.

First question - why is the intensity after going through the first slit $1/2 \ I_0$ regardless of slit orientation?

Firstly, I attempted the following, which was flat out wrong (also I don't know how to use Bra-ket notation here, I'm going to use unit vectors instead.. hopefully that's okay? Please excuse this hideous 'notation', just trying to illustrate my confusions):

Where $V'$ is the new vertical polarization state, and $\hat V$ and $\hat H$ are the vertical and horizontal states respectively.

I posited this because $\hat V$ and $\hat H$ represent the basis vectors $(0,1)$, $(1,0)$ that represent the vertical and horizontal aperture arrangements of the filters. We are instructed, as far as I could understand, to construct a new basis vector when there is an arbitrary aperture angle as a linear combination of the typical horizontal and vertical arrangements.. which led to something like this. This led me to state that the probability for absorption of the vertical filter to be..

This was an attempt to answer the first part of the question, which I'm aware was an answer of probability and not intensity, but I wasn't sure how to do this any other way. Anyway, that garbage attempt for physics aside, I'm told that the answer to this is that the intensity is halved from the first aperture, regardless of orientation of the slit. I don't really know why - my only guess is that it has something to do with the light being unpolarized. But, I mean, thinking off the cuff, if the light is a beam with a diameter roughly equal to the filter, then the filter would have to be a gap half the size of the circle in order for only half the light to make it through! I don't have any good justification as to why this doesn't make sense.

Second question - what is the sense behind the approach to find the probability for a photon to be detected by a PMT placed after the final filter?

My lecturer's answer states that after the light goes through the first slit, it is polarized along the $\alpha$ axis, which I think means it basically forms a line parallel and on top of the slightly diagonal, dotted line in the first filter. He contends that, since it makes an angle $\alpha + \beta$ with the transmission axis of the second filter (which is not apparent to me visually), the beam is reduced by a factor

and by a similar argument for the third filter:

So my specific confusions I need addressed are:

Your question is interesting as the answer involves more than basic quantum mechanics.

There is a subtle difference between the interpretation of statistical weights, which are also probabilities, and the probabilities obtained by overlaps like $\vert\langle\psi\vert\phi\rangle\vert^2$: both types probabilities have different origins. One is tied to incoherent averages, as referred to in the linked wiki page.

Moreover, by symmetry, "which one" of the two polarization is completely undefined if the light is completely unpolarized. In other word, the completely unpolarized light is equally well described by the mixture $$ \rho =\frac{1}{2}\vert \nearrow \rangle\langle \nearrow\vert +\frac{1}{2}\vert \nwarrow\rangle\langle \nwarrow\vert\, . $$ (unfortunately, slanted double arrows are not so easily accessible so $\nearrow$ is a standin for $\updownarrow$ rotated by $45^\circ$ to the right, and $\nwarrow$ is a standin for $\leftrightarrow$ rotated by $45^\circ$ to the right) or for that matter, using any slanting of $\updownarrow$ and $\leftrightarrow$.

After the first polarizer, the state is pure, and pure states are those that you are familiar with. We can do away with all the density matrix stuff and think of the state as the ket $\vert \updownarrow\rangle$, or any slanted thereof where the slanting would be parallel to the axis of the polarizer. Your $V'$ state is described by a ket $$ \vert V'\rangle =\cos\theta \vert \updownarrow\rangle +\sin\theta \vert \leftrightarrow\rangle\, . \tag{2} $$

What is the difference between (1) and (2)? In (1) is it not possible to find an orientation of the polarizers that will result in no transmission of the light. If there was such an orientation, light would be polarized at $90^\circ$ w/r to this direction. In (2) on the other hand, the ket $$ \vert H'\rangle = -\sin\theta \vert \updownarrow\rangle +\cos\theta \vert \leftrightarrow\rangle $$ is orthogonal to $\vert V'\rangle$ so the probability of obtaining the outcome $H'$ as a result of having the system initially in $\vert V'\rangle$ is $ \vert \langle H'\vert V'\rangle\vert^2=0$, i.e. no light would pass through a filter aligned parallel to the $V'$ direction if light was initially described by the polarization ket $\vert H'\rangle$.

Note that, from (2), you can recover Malus' law. The probability of light initially polarized as $\vert \updownarrow\rangle$ to exit in the state $\vert V'\rangle$ is $$ \vert \langle \updownarrow\vert V'\rangle \vert^2 =\cos^2\theta $$ if $V'$ makes and angle $\theta$ with the vertical. The attenuation in intensity from Malus' law follows immediately from the (discrete) probability of a photon going though two polarizers sets at a relative angle $\theta$.

Finally, it is possible to have partially polarized states, in the sense that (1) generalizes to $$ \rho= a\vert H\rangle\langle H\vert +b\vert V\rangle\langle V\vert $$ where $a+b=1$, where $a$ is the statistical probability of having an "H" photon and $b$ the prob of finding a $V$ photon in the beam. In this case, and contrary to (1), there is an orientation where the intensity of light will be minimal but non-zero.

The best reference on density matrix in 2-level systems, with discussion that is done in terms of Stern-Gerlach magnet but otherwise immediately applicable to polarization, is the first chapter of Blum, Karl. Density matrix theory and applications. Springer Science & Business Media, 2013, available as a google books. Indeed, section 1.1.2 is on polarization (in terms of Pauli matrices).

Not the answer you're looking for? Browse other questions tagged optics visible-light polarization quantum-optics or ask your own question.

6
What is fundamentally happening that causes light to change its orientation when repeatedly polarized?
1
Measuring polarization - problem with understanding
11
Why is the quantum Venn diagram paradox considered a paradox?
13
Trouble with polarizing filters
0
Light intensity through polarizers and a diffuse reflection
2
Why is polarised light so bright? if polarizing lens are made to dim the light
2
Modelling sky noise using a 2D array with plane waves