Superposition of waves and energy transferred

A wave transfers energy. I was reading about the superposition of two waves, where the amplitudes of the two waves added up to produce a resultant wave.

When two waves, propagating in a linear medium, interfere with each other, the amplitudes of individual points within the region of interference could add or subtract, but this does not affect the flow of energy.

We can show it in a simple example below: 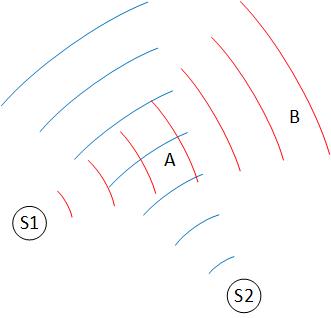 Point A is in the region of interference and its amplitude will be affected by both waves.

We could come to a similar conclusion, if we took into account that the waves don't get reflected while propagating in a uniform linear medium, which means that no energy is coming back and, therefore, it should continue moving forward, unaffected by other waves in that medium. The sound wave moving in the air will be reflected by a wall, but not by another sound wave.

Not the answer you're looking for? Browse other questions tagged energy waves superposition or ask your own question.