Does the size of a compass affect the result of its measurement of a magnetic field’s force?

Assuming that you are not trying to block earth's magnetic field, it will be present when you are measuring the magnetic field around a wire and will have to be taken into account.

Regarding the effect of the compass size.

Let's assume that you are using an old fashioned compass with a magnetized needle.

It could be a different story when we deal with the current in a wire. The magnetic field around a wire runs in circles and therefore would be changing from point to point (won't be uniform).

Let's assume for a moment, that we have a straight vertical wire, so all magnetic lines (circles) lie in horizontal planes and we could measure the field holding the compass horizontally, which is how it is supposed to be used.

Let's now assume that the needle of the compass is symmetric. Let's also assume that, when we want to determine the direction of the field in a particular point, we place the center of the needle over that point. 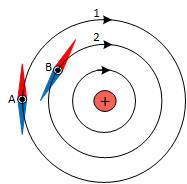 Both needles point along the tangents to the corresponding magnetic line circles. Since a needle and a circle are symmetric relative to a point of measurement, the direction of the needle should not depend on the size of the needle or the radius of the circle.

So, for the case of a straight vertical wire, we can state that the measurements of the magnetic field in any horizontal plane won't be affected by the size of the compass. 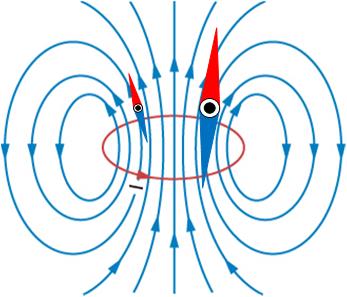 Judging by the density of the lines, we can tell that the field is not uniform.

If we try to determine the direction of the field with a small needle (on the left), the difference in field strength around its ends won't be significant and it'll still point more or less along the tangent to the magnetic line at the center of the needle.

However, if we try a large needle (on the right), its two ends will be exposed to different field strengths and therefore it won't be pointing along the tangent to the magnetic line going through its center.

Of course, if the size of a compass/needle is small in comparison with the radius of the lines, of a non-uniform magnetic field, at the point of the measurement, we could approximate this field as uniform and therefore the results will be the same for small and large (relatively speaking) compasses.

Not the answer you're looking for? Browse other questions tagged electromagnetism forces magnetic-fields or ask your own question.