I'm working on an answered physics question in the book but I'm having trouble understanding why the problem could be solved by setting net torque equal to 0 and not net force. 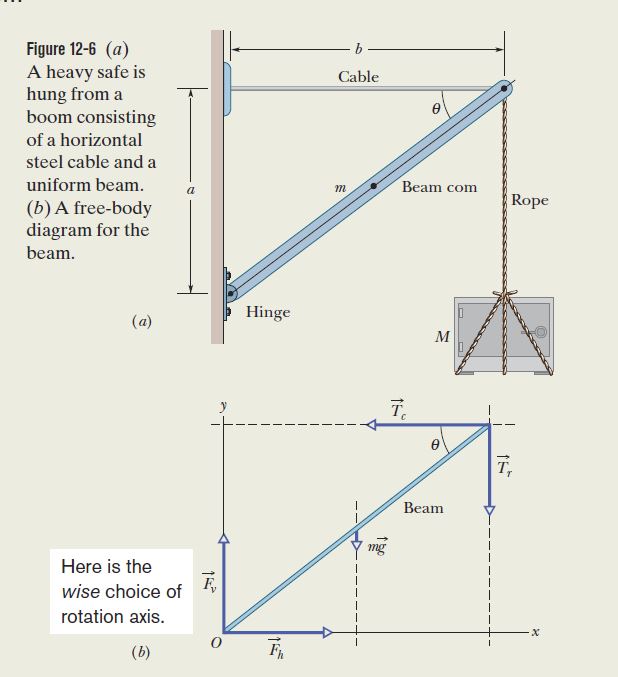 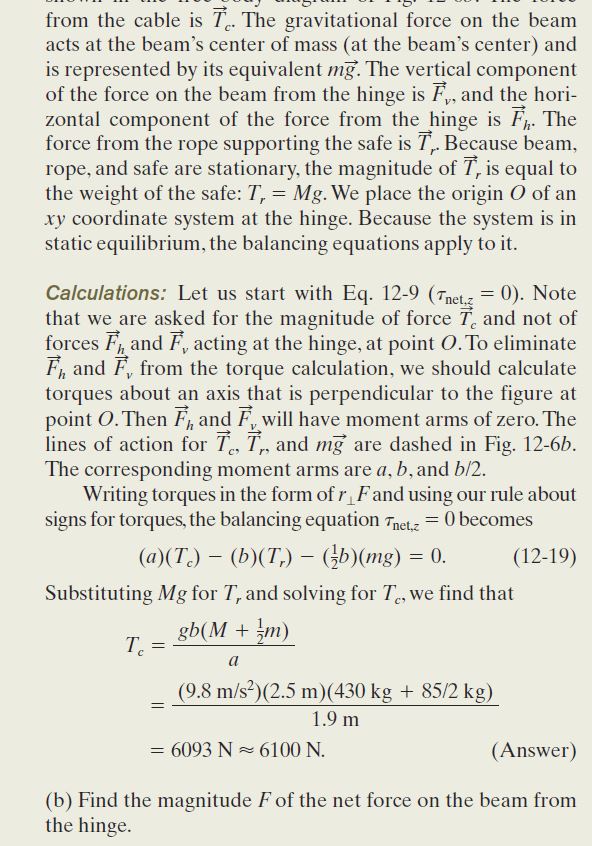 I understand why that works, but I'm not sure why you can't instead balance forces as was done in previous problems. In other words:

If you divide the equations, you can eliminate Fh and solve for Ft... why is this not appropriate?

Balancing forces is useful, but it is not enough. There aren't enough constraints on the problem to find all the forces just by setting the net force to zero. In your diagram, you could add any value to $\vec{F_h}$. As long as you add the same to $\vec{T}_c$, the net force doesn't change. So find some sum of forces that comes to zero, then add 1 Newton to both horizontal forces on the problem, and you have a new zero-net-force solution.

On the other hand, as long as the net force and net torque are both zero on a stationary rigid object, it will stay stationary. We need both because net force only tells us about the acceleration of the center of mass. If a beam starts spinning around its center, it has zero net force on it (because the center of mass isn't moving), but there was some net torque that got it spinning. So setting $F_{net} = 0$ is not enough.

As for what happened in your work, it's hard to tell. First, try to stick with well-defined notation. This will make it much easier for people to understand what you mean. Your question defines the variables $\vec{T}_c$, $\vec{F}_v$, and $\vec{F}_h$, which you didn't use. Your proposed solution uses the undefined variables "Fhx" "Fhy" and "Ft". Then you write about "theta" without defining it, either.

My best guess is that you assumed that the net force from the wall on the beam acts along that beam. That is, in the notation of the problem, you assumed

but there is no reason to assume this. That sort of assumption works for strings or ropes, which can support any shear, but for beams, the wall can exert forces in the horizontal and vertical directions independently. You won't know how big those forces are unless you impose both the condition that the net force on the beam is zero, and the condition that the net torque on the beam is zero.

Not the answer you're looking for? Browse other questions tagged homework-and-exercises forces torque equilibrium statics or ask your own question.

1
Cylinder rolling down an inclined plane held by a string
0
Determining direction of static friction when tension and gravity are present
0
Why do we consider the tension in a taut cable to be zero Newtons or Pound Force?
1
Three hinged rods problem
2
Static equilibrium question: Horizontal rod attached to a wall
1
Does $m$ in this problem refer to the total mass of the system or just the mass of a single body?
2
How would I draw the forces on two identical ladders propped up against each other, connected by a rope?
0
Mathematical segmentation of an accelerating body and the resultant torques