Physical intuition for the Wilczek-Parikh tunneling picture of Hawking radiation

There's a naive pop-sci explanation of Hawking radiation, where a particle-antiparticle pair is produced just inside the event horizon. The particle with positive energy tunnels out and escapes, while the one with negative energy falls in, so the black hole shrinks.

As appealing as this picture is, it seems to have no relation to the usual derivation in terms of Bogoliubov transformations. But about twenty years ago, Parikh and Wilczek came up with a tunneling interpretation of Hawking radiation that is very similar! The steps of the derivation are:

In their own words:

Although this radially inward motion appears at first sight to be classically allowed, it is nevertheless a classically forbidden trajectory because the apparent horizon is itself contracting. Thus, the limits on the integral indicate that, over the course of the classically forbidden trajectory, the outgoing particle starts from $r_{\text{in}} = 2M − \epsilon$, just inside the initial position of the horizon, and traverses the contracting horizon to materialize at $r_{\text{out}} = 2(M − ω) + \epsilon$, just outside the final position of the horizon.

Everything else in the paper is just direct calculation, so this is really the crucial insight, but it's completely opaque to me. I basically don't understand a single aspect of it.

I looked at papers citing this one, but all of them simply repeated the same calculation without much commentary. Does anybody have a physical picture of what's going on here?

Let us start with the last subquestion.

What triggers the particle production in the first place? Is it a pair production? If so, what happens to the other member of the pair?

Quantum vacuum has a complicated structure. Even if there are no particles, there are still non-zero vacuum expectation values of various quantities (for example zero-point energy).

Let us start with a simple harmonic oscillator: $H_0 = \frac12 (p^2+\omega^2 q^2)$. It has the usual quantization: $\hat H_0 |n\rangle =\hbar \omega (n+\frac 12)|n\rangle$, $n=0,1,\dots$ Now, consider parametric excitation of this oscillator by adding time dependent small perturbation $H_1(t)$. Even if the initial state had no quanta ($|0\rangle$), after some time we can expect to have nonzero probability to find the system in states $n\ge 1$. In other words, quanta are created!

What in this simplified model would be 'pair creation'? Let us consider two harmonic oscillators with the same frequency (quantum numbers $n_+$ and $n_-$) and impose on them 'charge conservation' by requiring that operator $\hat Q=e(n_+-n_-)$ commutes with all perturbations. Then excitation of $|0,0\rangle$ vacuum is only possible by simultaneous creation of both types of quanta. We now have pair creation.

In asymptotically flat GR the role of 'charge' is played by energy (or ADM mass), so to describe creation of particles by a black hole, besides degree of freedom describing the particle itself, we would also need additional degree(s) of freedom to account for the energy conservation law.

Now, black holes have a lot of d.o.f.'s that could only be fully described by a theory of quantum gravity. However, if we can convincingly claim that the energy has to come from a particular source, it could be enough to include only one new d.o.f. for that source.

Another possibility is to include the black hole mass $M$ into the description of the quantum state and so the state $|M,0\rangle$ without outside particles would be permitted by energy conservation to evolve into state $|M-\omega, \omega\rangle$ of a smaller black hole and escaping particle. That is the route taken by Wilczek-Parikh.

Now onto other subquestions.

During the "tunneling" process, $r$ seems to decrease monotonically. Why would falling inward be classically forbidden? 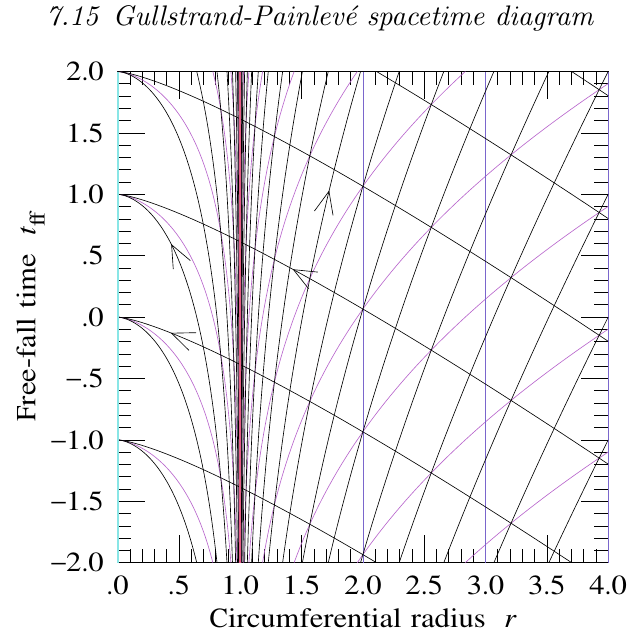 Note, that the infalling ($p_r<0$, corresponding to '$-$' sign in geodesics equation (3) of the paper) null geodesics are quite regular across horizon, and for outgoing ($p_r>0$) geodesics it takes infinite amount of time to get from $r=2M$ to a finite distance away from horizon, while inside the horizon geodesics with $p_r>0$ fall into the black hole much slower than infalling ones.

So, when the particle with energy $\omega$ with a positive $p_r$ starts moving in the metric with mass $M$ (that is inward) this is classically forbidden because it should feel the metric with mass $M-\omega$ which should place her outside the (shrunken) horizon, and so it should move outward. So the whole region of inward motion from $r=2M$ to $r=2(M-\omega)$ is classically forbidden. At the end of the forbidden region the particle emerges just outside the new shrunken horizon and start (classically allowed) outward motion.

Why should the particle start at $r_\text{in}$? Why does it get to start right at the initial horizon, instead of having to start further in?

As I explained, the whole interval $r_\text{in}$ to $r_\text{out}$ is a classically forbidden region. To calculate emission rate we need to calculate imaginary part of action over it. One can think that at one end one there is a black hole of mass $M$ and zero mode of a particle with energy $\omega$, while at the other end of the region there is (nonzero probability of) a black hole of smaller mass $M-\omega$ and a real particle with energy $\omega$.

How exactly does the horizon contract? Does it gradually 'follow' the particle inward? Does it instantly shrink when the particle is produced? The paper is very vague on this.

Horizon is a null surface, so if an outgoing particle emerges at $r=2(M-\omega)+\epsilon$ at a moment $t$, then there is a null geodesic that was falling inwards with positive $p_r$ in a metric with the mass $M$ and then got deflected by intersecting the particle worldline just as it emerged into being so that it is now fully vertical at $r=2(M-\omega)$. This geodesic is now a new horizon. So there is no instant shrinking.

As for the rest of your questions, this paper doesn't address them but there is other literature on QFT in curved spacetime, such as "Quantum Field Theory in Curved Spacetime and Black Hole Thermodynamics" by Wald.

Not the answer you're looking for? Browse other questions tagged general-relativity black-holes hawking-radiation quantum-tunneling qft-in-curved-spacetime or ask your own question.