Why is nuclear fission asymmetric?

Is there a simple explanation why natural fission (say of U-235) tends to produce unequal fragments, with A = 95±x and 137±x? Coulomb energy and surface tension would seem to favor equal fragments. Do the shell model’s magic numbers explain the asymmetry?

For an axially symmetric shape, you can parametrize the surface of a nucleus using a form like this:

where $Y_{lm}$ are spherical harmonics. (In reality one typically has to include higher-order terms, and a form like this can't actually describe shapes near scission, but $\beta_2$ and $\beta_3$ are enough for a qualitative discussion.)

The parameter $\beta_2$ describes reflection-symmetric ellipsoidal deformation (prolate is positive), while $\beta_3$ describes reflection-asymmetric shapes, like a pear. We can construct a potential energy surface as a function of these parameters using a technique such as Strutinsky smearing (Strutinsky, Nucl. Phys. A122 (1968) 1, described in http://arxiv.org/abs/1004.0079 ). In this technique, we take the liquid drop energy and add in a correction for shell effects.

Here is a sample of a potential energy landscape from a paper by Ichikawa. The parameters $q_2$ and $\alpha_g$ are analogous to $\beta_2$ and $\beta_3$. 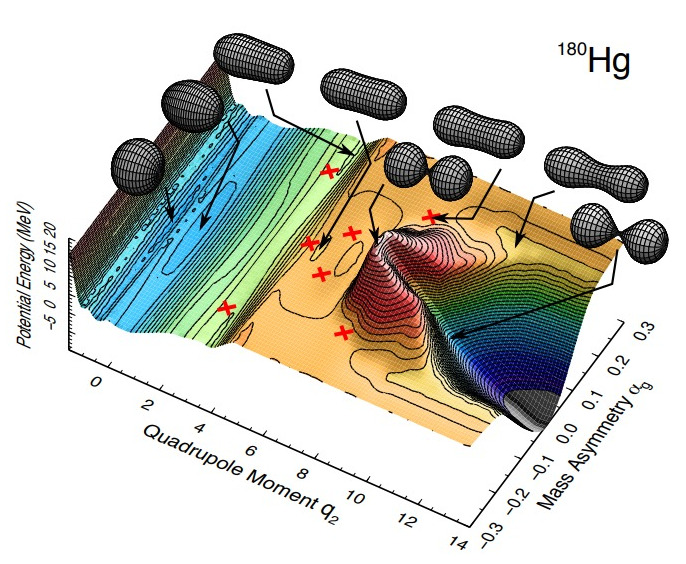 To reduce the complexity of visualization, we can often minimize the energy with respect to the $l\ge 3$ parameters for any value of $\beta_2$, so that the potential is just a function of a single variable, $U(\beta_2)$.

As $\beta_2$ varies from the typical ground-state value (maybe 0.2 for common actinides?) to larger values leading to fission, $U$ can have fairly complex behavior. E.g., there can be fission isomers, which are metastable states stuck in a second minimum at a high deformation. With these big changes in deformation, you get totally different magic numbers than the ground-state magic numbers. As you move out toward scission, the two parts decouple, and the relevant shell structure becomes the shell structures of the two fragments.

So what happens in fission of most of the actinide isotopes that are important for nuclear energy is that near the final barrier in the potential (which I think is not yet very close to scission), the shell structure favors large values of $\beta_3$. The top of the barrier is basically the "bottleneck," because the WKB tunneling probability depends exponentially on the square root of its height. Therefore there is a tendency for fission to occur with whatever asymmetry minimizes the potential for the value of $\beta_2$ that represents the lowest barrier.

It is not always true that fission is asymmetric. For example, ${}^{180}\text{Hg}$ is found to undergo symmetric fission, and that finding is reproduced in the potential energy surface calculated by Ichikawa. Also, for isotopes at the upper limit of the sizes that have been studied (near the shores of the "island of stability"), I believe fission is often predicted to be symmetric.

The current thinking seems to be that the mode of fission, symmetric or asymmetric, is determined at a point close enough to scission so that you are basically seeing the shell structure of the fragments. A recent paper by Pomorski says,

On the theoretical side, there is also general agreement that this asymmetry originates from the influence of shell effects in the nascent fragments[52, 53].

However, this seems to be subject to interpretation, and in fact the "decision" about the mode of fission is probably made long before scission, close to the top of the barrier. See, e.g., Zhang. At this relatively early stage, talking about shell structure of the fragments is at best an approximation or a heuristic.

There can also be cases where there is both a symmetric path and an asymmetric path, as in Ichikawa's calculation for ${}^{236}U$: 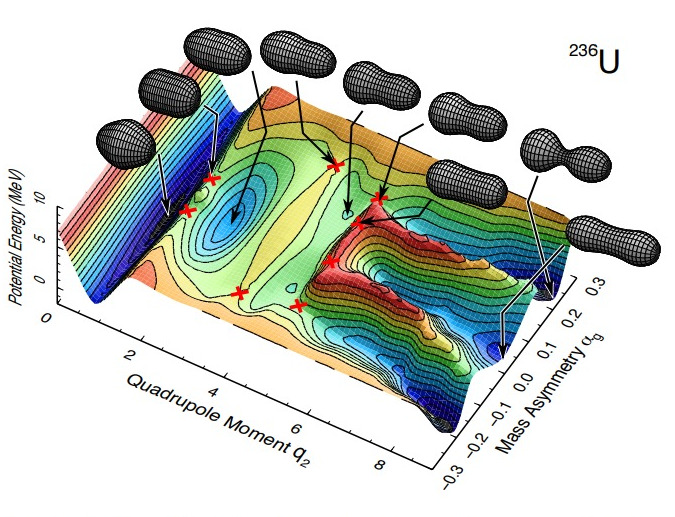 0
The maximum electric charge on a drop