Norton's dome and its equation

But this equation of motion doesn't make sense. Because as $r$ becomes large, the tangential force is also becoming large. The tangential force should always be less than or equal to the drive force from gravity. What am I seeing wrong?

In addition to Lubos Motl's correct answer, I would like to make a few comments related to Norton's dome:

$^1$ I imagine that the point particle is sliding with no friction. (The rolling ball in Norton's figure is slightly misleading and presumably only for illustrative purposes.). A more complete derivation would check that the point particle doesn't loose contact with the doom. If one would like to avoid such an analysis, one may for simplicity assume that the dome is a two-sided constraint.

$^3$ For each solution $s$, which is defined for non-negative times $t\geq 0$, let us for convenience extend in a trivially fashion $s(t<0):=0$ for negative times $t<0$. Then if we time-translated a solution $t\mapsto s(t)$ into the future, we get another solution $t\mapsto s(t-T)$ for some moduli parameter $T\geq 0$. Therefore strictly speaking, the first branch in eq. (8) generates a 1-parameter solution with a moduli parameter $T\geq 0$. So in fact, the IVP (7) has infinitely many solutions! Note that the second trivial solution branch (8) can be viewed as the $T\to \infty$ moduli limit of the first solution branch (8).

You may notice that the equations don't pass the test of dimensional analysis. Some factors are missing.

However, let me answer your question:

The reason why the acceleration never exceeds $g$ is that the dome is actually finite, it is truncated at the bottom. For too high values of $r$, your initial formula for $h(r)$ will actually exceed $r$ itself, and you won't be able to find points that are "deeper" below the summit than the total length from the summit along the dome. Well, the dome is actually truncated earlier than that.

See e.g. this presentation of the problem. Note that Norton's goal was study the behavior near $h=0$ and $r=0$ which he called an "example of indeterminism in Newtonian classical physics" because the particle may sit at the top for any amount of time, and suddenly freely decide and get rolling. That's why the truncation of the dome isn't important.

Here are my more general comments about Norton's dome and its harmlessness in quantum physics.

In that article, I also calculated that the dome has to end up at the point where $dh/dr=1$ because it's the sine of an angle which implies $r_{\rm max}=(9/4)g^2=h_{\rm max}$; I also use an additional coefficient $K$ to make the formulae dimensionally correct.

The dome equation is expressed in terms of arc length and height, which hides a lot of bad behaviour. As Luboš has pointed out, beyond a certain point it is no longer physical so we need to constraint it before that happens.

You can actually work out the Cartesian equation for it, which is plottable: 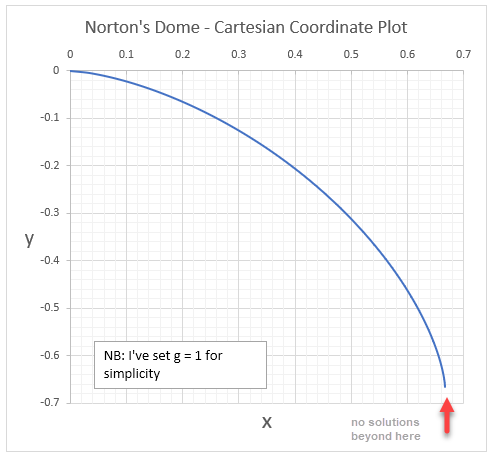 This isn't the only constraint that should be applied though. It's said that because of the non-analytical nature of the dome curve (it's not differentiable at the apex beyond the first derivative) it admits more than one solution. In fact, it's the square root that allows us to easily intuit the other solution which represents the trajectory of a particle reaching or leaving the apex with velocity $v$ at the limit $v = 0$.

Norton tries to pass off his other solution as Newtonian but in fact it's not (at the apex, anyway). This in itself isn't the source of his claim of non-determinism though. That comes from him stitching two solutions together that have different initial conditions at some arbitrary time T. This makes zero sense and has no physical justification.

I've written a detailed analysis of why Norton's dome does not prove Newtonian mechanics is non-deterministic here.

Not the answer you're looking for? Browse other questions tagged newtonian-mechanics symmetry-breaking determinism or ask your own question.

1
Ball spontaneously rolling down hill
47
Do identical starting conditions always lead to identical outcomes?
9
How can the solutions to equations of motion be unique if it seems the same state can be arrived at through different histories?
38
History of interpretation of Newton's first law
28
What situations in classical physics are non-deterministic?
14
Infinite series of derivatives of position when starting from rest
15
Reversibility = non-causality. Can this be right?
18
What's the intuitive reason that phase space flow is incompressible in Classical Mechanics but compressible in Quantum Mechanics?
17
Does the mass point move?
6
Paths in phase space can never intersect, but why can't they merge?
See more linked questions

1
Why aren't the weights of the beads considered in this equation?
4
A question on uniform circular motion and minimum tangential velocity
15
Reversibility = non-causality. Can this be right?
1
Target that topples like real person
1
Nonsensical equation for slipping vs. tipping point on an incline?
1
Working with ramps and rotational acceleration (friction involved)
1
Why is the minimum velocity required to complete a vertical circular motion different for a string and a rigid rod?
1
The direction of the centripetal force in a vertical circular motion under uniform gravity
2
Expression for force of gravity on an arbitrary curve with endpoints fixed