Orbits of stars in the Milky Way

I know that in our Solar System, planets orbit the Sun according to Kepler's laws. What about other stars in the galaxy? Does each type of star population (e.g. population I and II) have a certain type of orbit? What are these orbits called? Which rules do they follow?

Stellar orbits in the galaxy can be classified in a few ways. Splitting up by Population I, Population II is not the most instructive way to proceed. While Pop II stars are typically older than Pop I stars, and older stars usually have different orbits than younger stars, this isn't such a direct link.

One way I think it is instructive to break up orbits is by which morphological component of the galaxy they belong to. Typical galaxies are often decomposed into a "bulge" (central dense roughly spheroidal component), a disc, which may be sub-divided into a thick and thin component (this is the case for the Milky Way disc, for instance), and a stellar halo, which is a very extended roughly spheroidal component. I won't try to exhaustively describe every type of orbit which contributes to every component, but just give a few examples.

Disc orbits are often reasonably close to circular orbits (in an axisymmetric potential, a circular orbit in the plane of symmetry is stable, and stars form from gas which is forced onto ~circular orbits as it settles into a disc). Usually the orbits aren't exactly circular, and will wander both up and down (in $z$ direction) and inward and outward (in $R$ direction) while the star carries on around the galaxy (in the $\phi$ direction). A nice way to visualize these orbits in 2D is to look at their path in the $R-z$ plane - the $\phi$ track is fairly boring, it just goes around at constant angular momentum. Such visualizations look something like the following picture (the axis labeled $\rho$ is what I called $R$), notice that the motions are not disorganized but very regular; the fact that they fill in a sort of box shape is significant and rooted in the symmetries of the system and the conservation of energy and angular momentum. 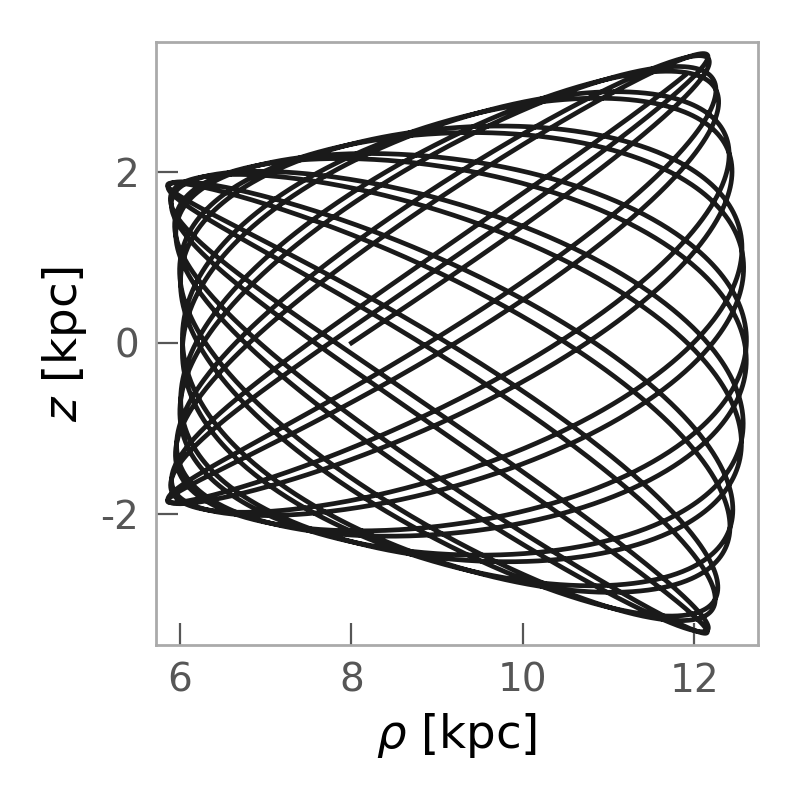 Bulge orbits are among the most interesting (or so I think) and come in many varieties. One that I find especially visually striking is the kind that gives a so-called boxy-peanut bulge (look for the faint-ish 'X' shape near the middle; yes I said bulges are 'spheroidal' before, I use the term extremely loosely):

Here's one example of an orbit that can give rise to the sort of structure in the image (second row), this time not in cylindrical $R-z$ coordinates but simply cartesian $(x,y,z)$ coordinates. Notice in particular the $x-z$ view in which the pattern giving rise to the 'X' shape is clearly visible. Of course it takes many, many stars all on similar orbits to give the final result in the image. 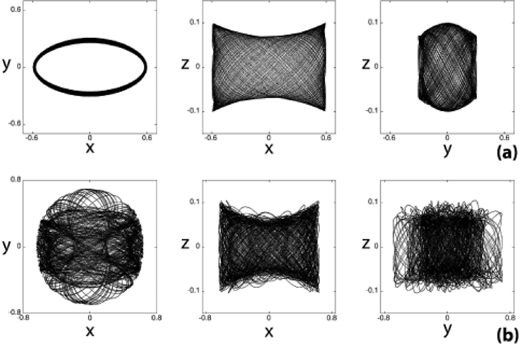 Finally, the halo has a whole mix of different orbits. Stars in the halo can either form there directly ("in-situ" halo stars), or come from smaller galaxies/star clusters destroyed as they orbit a larger galaxy ("accreted" halo stars), or be kicked out from the disc of the galaxy ("ejected" halo stars). Clearly these different scenarios imply different possible orbits. Destroyed galaxies/star clusters, for instance, usually leave behind a stream of stars which are all on similar orbits, and the shape of the stream roughly traces out the path of the orbit. You can see a few streams in this image of the Andromeda (M31) galaxy and it's population of dwarf satellites (plus M33, of course). For some streams the progenitor object is still visible, e.g. AndXXVII, while for others the progenitor object has been completely disrupted. 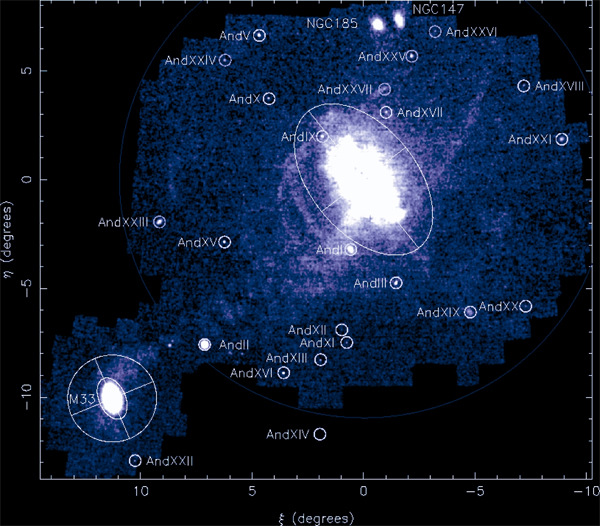 Note that this structure extends far outside the galaxy; the usual bright disc of Andromeda that you can see in many famous pictures is perhaps 1/10 to 1/5 the size of the white blotch in the middle of this image.

In general, population II stars are older, and are more likely to be found in the halo and "thick disk" of a spiral galaxy. Population I stars, being younger, are primarily found in the "thin disk", especially near star-forming regions.

As far as their orbital characteristics, as Lewis Miller already pointed out, there's not a whole lot we can say, because we don't know a whole lot about dark matter yet. We have, however, measured the tangential velocity of stars at various radii, and found that past a certain radius (typically a few kpc), the tangential velocity is roughly constant. This is not what you would expect from Keplerian dynamics, and, in fact, is one of the measurements that provides evidence of dark matter.

Stellar orbits in galaxies are heavily influenced by dark matter. Since we don't know what dark matter is or how it is distributed it is difficult to give "Keplers Law" type classifications for stellar orbits. For now the answer to your question is its complicated.

Not the answer you're looking for? Browse other questions tagged orbital-motion stars galaxies or ask your own question.

0
What will happen to the Earth when Milky Way and Andromeda merge?
0
Gravity effects when deleting stars or planets
0
Gravitation and the structure of galaxies
3
Since the Earth orbits the Galaxy, why doesn't it "fly away" from astronauts?
2
Multiple star system, stable orbits?
1
On Planets orbiting binary stars