This is what my textbook says on rocket propulsion:
$\hspace{75px}$ 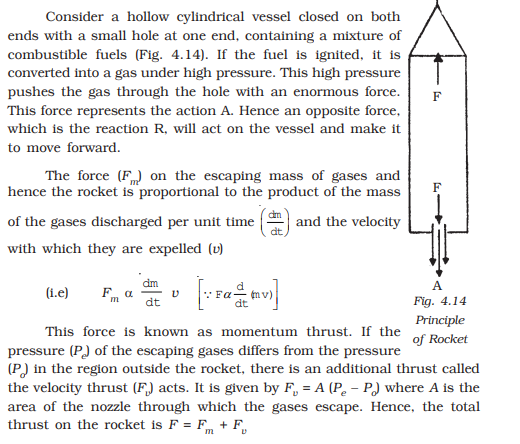 I’ll just address the two parts together. Bernoulli’s equation is about how pressure and velocity change as a bit of fluid moves along a flow line. It comes from the conservation of the energy of that bit of fluid.

So let’s follow it along. In the combustion zone, the gas is hot and under high pressure, but not moving very fast. Next it goes through the nozzle, where the gas speeds up and the pressure drops. This initially reaches its limit when the pressure has dropped to atmospheric pressure right at the end of the nozzle. At that point the gas is moving as fast as it can, and as much of the combustion pressure as possible has been converted to velocity. (You want that to get maximum thrust)

In space, you can take that further, dropping the exhaust to even lower pressure and getting more speed. More speed is more thrust. This is an advantage of having a “vacuum” engine on a rockets upper stage.

Bernelli's equation is only applicable to point where fluid travel sub sonic. To my knowledge the convergent section of nozzle/chamber uses bernelli's. As the the volume of the chamber is reduced the gas velocity increases. At the point it reaches supersonic speed it no longer necessarily apply. So the typical design stop here.

If we were to leave as so we would realize that a lot of energy is present still in the gas because when it leaves the rocket the plume expands a great deal in the radial direction. Now additional energy can be harnessed using the supersonic gas pressure to further accelerate the das in axial direction.

It is my guess that a reaction force is used from the walk of the nozzle. All's the nozzle has to do is expand at less rate than the gas does on its own. So a long tube after maximum convergence is all's that needed, that stops when gas pressure is near atmospheric pressure.

Not the answer you're looking for? Browse other questions tagged newtonian-mechanics fluid-dynamics rocket-science bernoulli-equation propulsion or ask your own question.