Self Induction: Why does light bulb flash when circuit switched off and not when switched on? 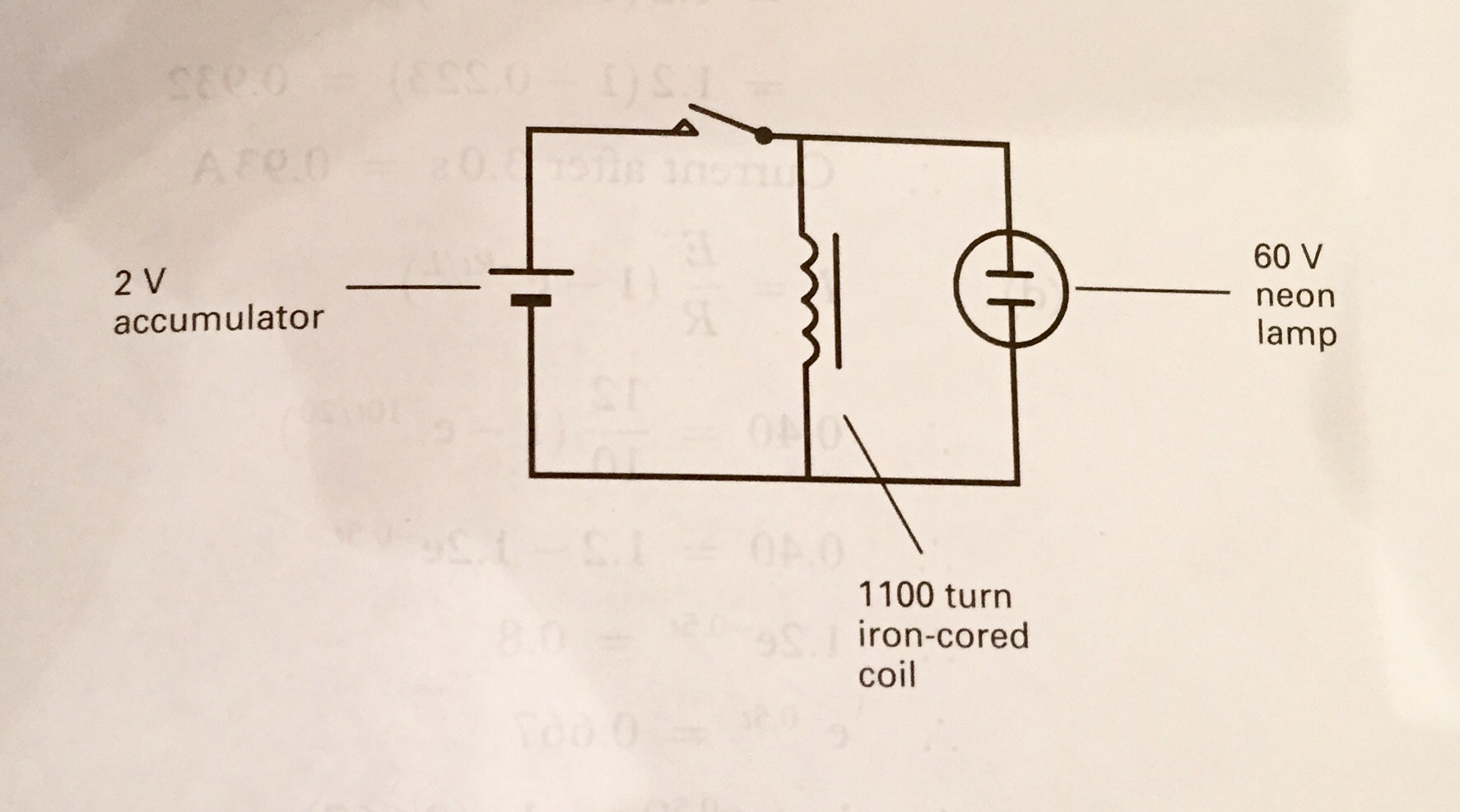 When the switch is closed the current through the coil changes and hence so does the magnetic flux around the coil. This induces an emf in the coil which, in accordance with Lenz's law, will oppose the change that induced it and therefore it is known as a back emf - it is in the opposite direction to the emf that created it.

My teacher told me: when the switch is closed the back emf induced in the coil, and the current takes a considerable time to reach its equilibrium value. Therefore, the induced emf is not sufficient to light the lamp. However, when the switch is opened the current falls rapidly to zero and therefore a very large back emf is induced. This emf may be much higher than that of the supply, causing the lamp to flash.

Firstly, why does the lamp not flash when the switch is closed? Doesn't the current and hence flux change at the same rate when it is switched on and off?

Secondly, if the emf spikes to its highest value when the switch is opened then why does the current in the circuit fall rather than rise in the graph below? I realise that it is the current falling that causes the change in flux that leads to the emf in the first place - but is there not a rise in the current through the lamp due the large back emf? 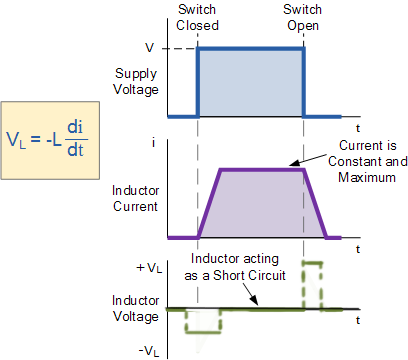 The neon bulb needs 60V across it to strike (turn on) and obviously the 2V emf of the accumulator is not enough.

The induced emf in the circuit depends on the inductance and the rate of change of current.

The important parameter for the rate of change of current is the time constant of the circuit $\frac LR$ where $R$ is the resistance of the circuit.

When the switch is closed the resistance of the circuit is relatively low so the time constant of the circuit is large which in turn means that the rate of change of current is small leading to an induced emf which is less than 60V; not enough to strike the neon bulb. 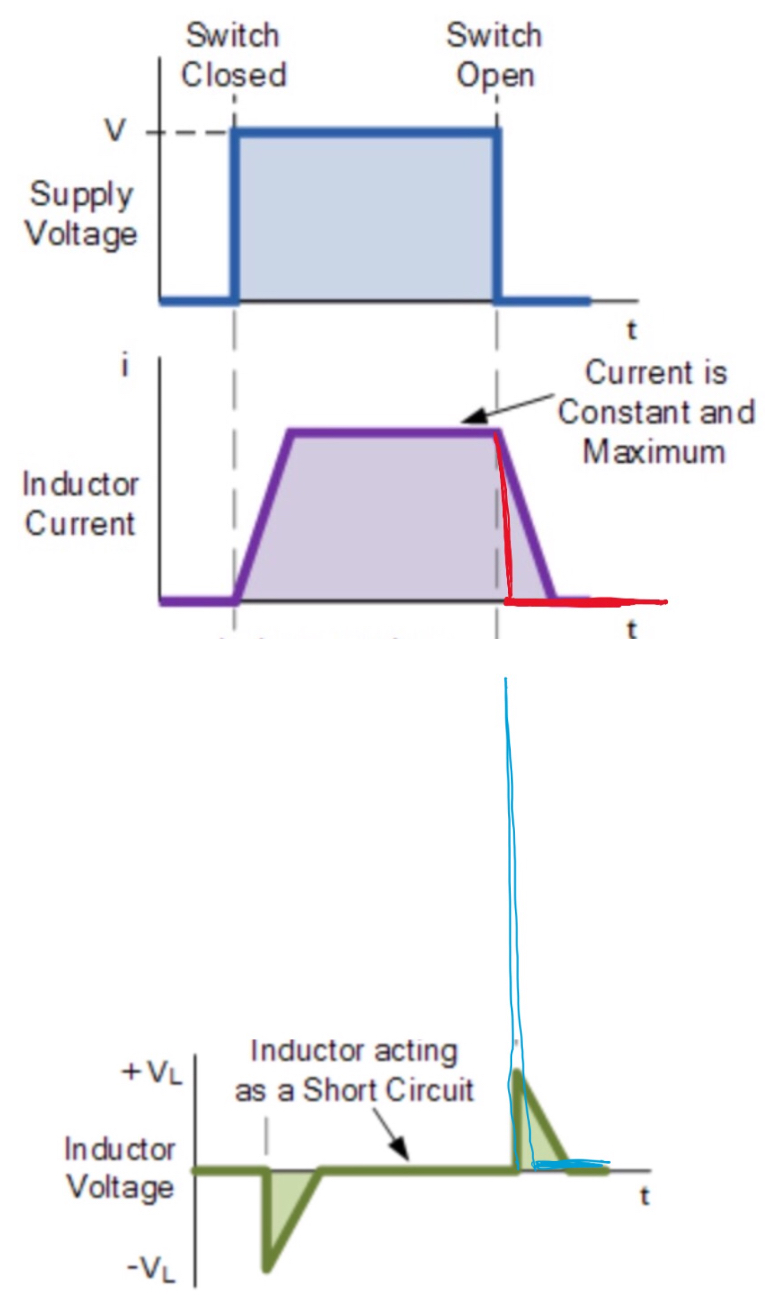 Update to address the second question.

With the switch closed the current through the inductor reaches a steady value $I$ and the energy stored in the inductor is $\frac 12 LI^2$.

So the current needs to decrease.
Lena’s law states that the decrease in current would be opposed by an induced emf.
However that induced emf cannot stop the decrease in current it can only slow it down.
In this case that induced emf is large enough to make the neon bulb a conductor.
Now you have a series circuit consisting of the inductor and a resistor (the conducting neon bulb).
The current in this circuit decreases from its original value being opposed by a smaller induced emf because the resistance in the circuit is much lower.

So there are two stages when the switch is opened both of which are characterised by a decrease in the current.
The first is the build up in voltage across the neon bulb and the second is when the neon bulb becomes a conductor.

If the voltage across the neon bulb did not become large enough to make it conduct then you would have an series inductor, capacitor and resistor (resistance of the wires) undergoing damped oscillations with the energy originally stored in the inductor being dissipated as heat in the connecting wires.

Answer to the second part of the original question.

You are right that induced emf in the coil is such that it would, if it were the only thing acting on the charge carriers in the coil, act on the current to flow in the direction it is already flowing so has an "increasing" effect. Hypothetically, if the coil obeyed the Ohm-like relation

The resolution is that above relation is not valid. Induced emf ($emf_i$, due to vortex-like induced electric field) is not the only thing making the charge carriers move in the coil. There is also "static emf" (let us denote it as $emf_s$, due to electrostatic field of static charges accumulated on the surface and the terminals of the coil). Total electric field inside the metallic wire is very close to zero, so the two counteract each other to a high degree and only a small difference is the resulting driving force that we may use as "voltage" in the Ohm-like relation:

At the same time, the Faraday law states

So even if $emf_i$ is very large, this does not mean that $i$ has to be also large, because the $emf_s$ can more than counteract the increase in $emf_i$. It only means that rate of change of $i$ must be large.

4
Self induction: Why is induced voltage smaller than the applied voltage?
1
How does a transformer work?
1
Why is the graph for induced emf againt angle a sine graph for an ac generator?
1
Magnet falling through a coil that does not form a circuit. Am I wrong or is the mark scheme?
0
Inductors in a.c. circuit problem
0
How does current vary with time through a motor?
1
Which provides the energy for induced current at the starting moment of the lenz's law
1
How is there self-induction at the moment of closing the circuit?
0
Back emf when circuit is closed and opened and the conservation of energy