What is meant by alternating current "reversing direction"

The electricity, or more precisely, electric current is flowing in a loop. When the electricity is delivered to your house, the loop is formed by a generator (the source of the electricity), an electric device in your house (the load) and two wires. In reality the picture is a little more complicated, but the idea is the same.

When we say that an alternating current reverses its direction, we mean that, every 16.7ms (for 60Hz system), it changes its direction in that loop, from clockwise to counterclockwise and back. 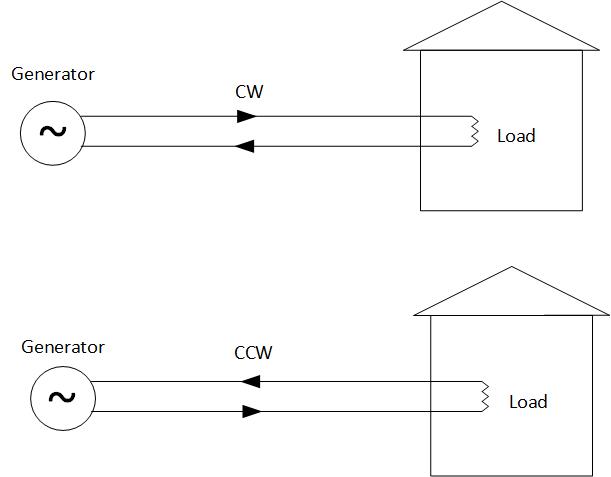 At a given moment, if the current flows toward your house in one of the two wires, it flows away from your house in the other wire.

To summarize, we can say that the electric power is always flowing from a power source to a load, while the electric current is moving in a loop and, in case of AC, its direction in the loop is alternating from CW to CCW.

Alternating current delivered to a house comes on two wires. Let's call them line1 and line2. Electric charge flows in those wires, just as water flows in a river, and the current in a wire is defined as charge moving through an imaginary plane that bisects the wire. This current flows in a circuit, meaning that the line1 current is equal and opposite to the line2 current (your house doesn't accumulate any charge).

That current can do work (spin a motor, illuminate your hallway, or make noises come out of a stereo), and your electric bill will remind you of this.

Alternating current means that line1 will first deliver current to the house, then take current from the house (while line2 takes and then delivers). That cycle repeats, fifty or sixty times per second.

Do they mean that the electricity starts travelling in the opposite direction (away from the houses and towards the power plant...

The 'electricity' that you pay for, is work, electric energy: that always goes toward the house and from the power plant. The electric current, i.e. the electrons moving in the wires, is what is 'reversing direction' which means it is reversing the polarity of the two wires, line1 and line2.

The key here is that both polarities, both current directions, are doing work in your house and taking power from the electric utility. The utility neither takes nor delivers charge because the two wires have cancelling currents, but it DID deliver power.

you are correct, the electricity reverses its direction of flow on each half-cycle of the AC. this means that the electrical flow pushes and pulls back and forth, and delivers work to your house the same way a timber-cutting saw blade cuts on both strokes.

AC current never changes direction, that is an outdated and frankly wrong headed interpretation by people who do not understand that it should not be used, it only confuses people. It always flows from source to ground, and that ground is, in fact, the ground under your feet more often than not in an AC circuit.

AC current is an incomplete description; it should be alternating current phases. The alternating in AC is created when the energy field is created by generating electricity with different polarity, NS-SN, during the process. A single phase is on and off during the creation of it as a series of impulses, with one phase receiving half of the generated power offset by the duration of the impulses, and the other receiving half in a two phase system like your average house. When superimposed on each other they form a continuous flow of energy from source to ground.

Showing a diagram with a power station getting return energy is a mistake in an attempt to simplify the concept. There is never a return line to the power generation station. The "return line" is the ground/earth like in the lightning strike example. If you look at the power line entering a building, it will have two or three cables, two for two phase, three for three phase and perhaps a steel or aluminum cable supporting them, there is no return wire. So an image with the generator, supply line and house with the current grounding under the house is correct

Imagine a single phase of AC as on and off over time for equal amounts of that on each phase/wire/leg. A visual aid for two phase AC could be a zipper with two different colored haves to reflect it's polarity. This is represented by red and blue most often.

I know this is an old post but these answers are incorrect. This is a common wrong thought process about AC, it does not travel back and forth, that would be oscillating current, not alternating current. Its not call Alternating Power for a reason as well.

The alternating bit is polarity (as mentioned above, yes), but that does not mean direction of flow. The current flows towards the load even when negatively charged. Think of bike pedals with baskets or clips, you can pedal while going up with your feet but, as long as you don't time the cycle wrong, your bike doesn't start going backwards (I know there is a clutch there as well for anyone who wants to pick apart the analogy but I am keeping it simple) it still produces a flow of the chain in one linear direction and goes to another rotating device on the other end. The key just like with DC is you need that chain to stay in a continuous loop or your power won't flow through the chain.

So though technically correct that most houses have 2 lines or hot legs some older homes had and still so only have 1 line, and they are right for the wrong reason. These are the source, the neutral leg is the sink (electricity flows from source to sink and you can think of it like a real sink...water goes into the sink and down the drain, if you don't have a sink electricity won't flow). If electricity would flow backwards back through this neutral you would have to switch it off with your main breaker (or every half cycle your power would be back on) which in most cases for safety the neutral is unswitched.

The reason you have 2 lines to your house and in many commercial building 3 lines is because these phases can work together to carry more power with less material, less inefficiencies, and less heat when needed and when not can offer the flexibility of multiple voltage options...in a home split phase configuration you have two 120V lines which add up to be 240V. If you are using both for something like your dryer it still have a neutral which is your return back to the utility power never flows backwards through it and ideally there is never power on the neutral without some form of other issue taking place because all power called for is consumed at the device...the neutral is just there (in this case) to close the circuit and give the device a voltage reference. Power can also be delivered without a neutral though uncommon today and even more uncommon in residential.

Just to clear up another misnomer that usually comes up next and people say well why does AC have less losses then...it doesn't when compared apples to apples; AC won the street battle because it's cheaper and easier to string up from house to house including the stepping up and down of voltages. Because AC can be easily transformed to a higher voltage those higher voltages have less losses. DC can and is used by utilities for bulk power transmission because it uses fewer conductors and has similar losses when transformed into high voltages.