Is it possible to create anti-muons in a particle accelerator?

I love particle and nuclear physics and I'm starting to search some things about it even. So, my doubt is: is it possible to create antimuons (positive charged muons) in a particle accelerator, but without colliding two beams? I mean, only colliding a beam against objects or with the help of machines like Cherenkov detectors or Muon filters.

Yes. In fact, the first process you generally learn about in quantum field theory is the annhilation of an electron/positron pair to produce a muon/antimuon pair.

is it possible to create antimuons (positive charged muons) in a particle accelerator, but without colliding two beams? I mean, only colliding a beam against objects

Yes, these are the fixed target experiments, various beams interacting with nuclei in the targets.

In this bubble chamber picture the target is the protons in the nucleus of the hydrogen atoms: 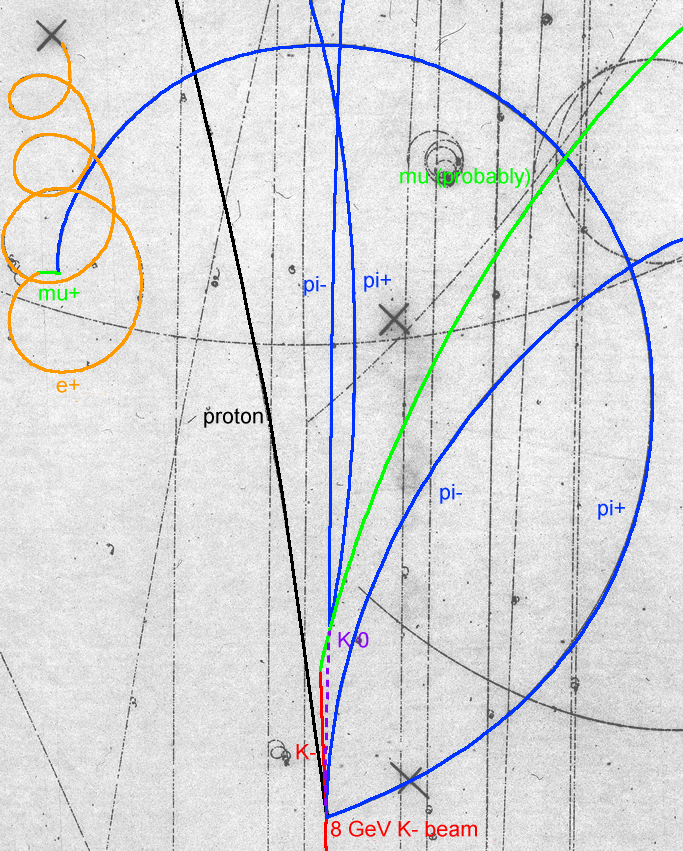 This picture comes from an experiment at CERN in which a beam of 8.2 GeV/c K- particles is fired into the 2 metre hydrogen-filled bubble chamber.

This event is rich in the number of different particles that can be identified from a `reading' of the tracks: electron, positron, pi+, pi-, K0, , K-, mu +, mu-; for details. In addition, one can infer the existence of various neutrinos in the decay of the pi+ (muon neutrino) and the mu+ (electron neutrino and antimuon neutrino).

or with the help of machines like Cherenkov detectors or Muon filters.

There is some confusion here, detectors detect particles, they do not produce them. In the picture above the detector is the camera taking the picture, plus the volume of hydrogen where the particles leave a track. The production happens at the vertices. In particular the muon producing vertices is where the green tracks begin, the decay of the Kaon and pion.

The site may interest you.

Not the answer you're looking for? Browse other questions tagged particle-physics antimatter particle-accelerators leptons cherenkov-radiation or ask your own question.