Does the mass of a bicycle directly affect stopping distance?

In this answer on the cycling SE, the claim is made that adding more mass to a bicycle increases the stopping distance. I was under the impression that mass should not affect the stopping distance so long as all the other factors remain the same (balance, coefficient of friction, etc.).

The answer is a little more nuanced than a simple yes or no, but for most cyclists stopping distance will increase with mass. Allow me to explain how:

This minimum stopping distance is mass independent. When you apply your brakes, (usually) a caliper applies a force to the wheel. This force depends on how hard you brake, and the location of the caliper, and lots of other engineering specifics. What it doesn't depend on is the total mass of the object, so $m$ will not cancel out of the stopping distance.

An example might clear up some confusion in the comments. Imagine two cyclists, "tiny Tim" and "big Bob". Both are riding identical bikes but Bob has more mass than Tim. They approach a stop sign and wish to come to a complete stop with the same initial velocity:

Since Bob has more mass he will have to apply his brakes harder than Tim does, i.e. generate a larger force, if he wishes to stop in the same distance. However, Bob's extra weight generates more available friction with the ground, and so his maximum available stopping force is larger than Tim's.
If both need to stop in the minimum amount of distance, they should apply a braking force up to the maximum allowable by friction between the ground and wheels. Any more and they risk wheel slippage which will raise their braking distance. Thus Bob's minimum stopping distance is the same as Tim's because his max available force is proportionally larger (e.g. if he's twice as massive, he has twice the maximum braking force before his wheels slip).

That depends on what the limiting factor is in the stopping distance before changing the mass.

If you could say that the limiting factor was the coefficent of friction between the tires and the road (braking hard to the point of slipping), then that would remain relatively unchanged with increased mass, and you'd have similar braking performance.

The force that the brakes can apply to the wheel depends only on the friction characteristics of the brake-wheel interface, the strength of the rider's fingers and the mechanical advantage afforded by the braking system. All of that is independent of the mass that's being carried by the bike.

As soon as that, rather than the friction between the tyres and the road, becomes the limiting factor, increased weight will increase stopping distance. To take an absurd example, if you're cycling around with a thousand tons of neutron star in your backpack, nothing you do with your brakes is going to slow you down by any appreciable amount.

Here is a practical answer. If you can make your tires skid, mass does not really affect stopping distance. This is another way of saying the limiting factor is road/tire friction. Thus max stopping force increases proportionally with mass and balances the F=ma equation. Most people can make their tires skid if the brakes are adjusted/maintained/working properly. You will just have to squeeze harder. Unless you are very heavy and/or have relatively weak hands, you can probably lock up your brakes. Note that you do not actually want to lock your brakes, because the coefficient of static friction is usually slightly higher than the coefficient of sliding friction.

Let's look at some typical values for older road bikes:

Without a headwind, at 30 mph, let's repeat the comparison. In this scenario, the effect of increased mass becomes barely measurable:

So with an 18 mph headwind, about 1/6 - 1/4 of the deceleration is the result of wind resistance. If Big Bob's bike/rider combination is twice as massive as Tiny Tim's bike/rider combination, I would expect Tiny Tim's stopping distance to be a few percent shorter than Big Bob's stopping distance when facing such headwinds. (It would be several percent shorter, but I expect that Big Bob has more cross-sectional area than Tiny Tim. Big Bob's greater wind resistance could offset about 3/5 - 2/3 of Tiny Tim's advantage from his lower mass.)

For further reading (and sources for most of the "typical values"), see Bicycling Science by Prof. David Gordon Wilson.

Do the wheels skid (how much friction between the tire and the ground)?

Assuming sufficiently-strong brakes (and maybe any legal brakes are sufficiently strong, e.g. in some jurisdictions the brakes are required to be strong enough to skid the back wheel), the 2nd of the above (i.e. friction of tire on ground) often seems to be the limiting factor. Then the distance is (theoretically) independent of mass -- the heavier the bike, the greater the friction (per Amontons' first law), thus the mass cancels out so that minimum distance is independent of mass -- because with greater mass you need more stopping force, but you have correspondingly more friction.

Amontons' first law is just an approximation (but maybe a good one), which you might want to check with real-world experiments (different tires, weights, road surfaces).

Does the rider go over the handle bars?

I think though that, assuming good brakes, the front wheel generally won't skid (and the back wheel will, if the back brake is applied) because with any deceleration the apparent weight moves forward, off the back wheel onto the front.

Therefore (assuming sufficient braking) what actually matters is the position of the rider: the rider should be low and as far back as possible during an emergency brake -- so that their centre of mass is as far behind the front wheel as possible. 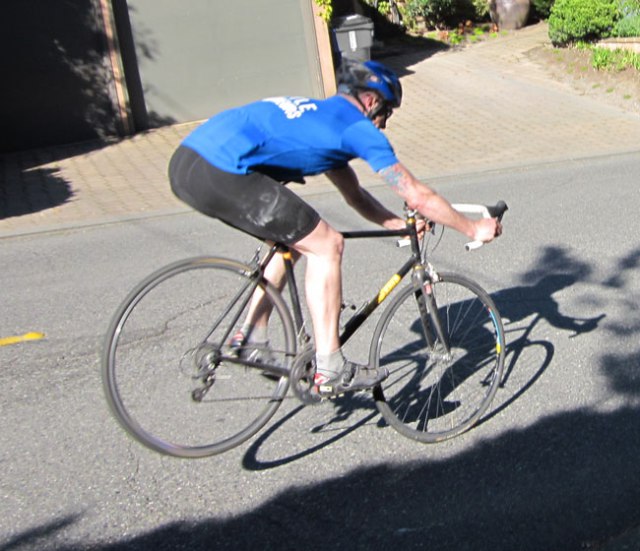 image from How to Brake on a Bicycle

Since few riders ever brake this hard, how come they still go over the bars? Here is what appears to happen to most riders who go over the bars: If riders don’t brace themselves against the handlebars, their momentum will push them forward over the handlebars as the bike slows. (Imagine being a passenger in a car without a seatbelt as the driver brakes hard.)

To avoid this, Hahn in the photo above braces himself against the handlebars and locks his elbows. He has shifted his weight as far back as possible. You can see his bicycle’s saddle underneath his belly. With this technique, he did not “go over the bars.” And if your bike’s rear wheel does lift, it happens slowly enough that you can counter it by slightly releasing the front brake lever.

Theoretically, if riders' positions are equal, a heavier bike might stop better (skid or flip less easily) because that lowers the centre of mass of the rider+bike combination; in practice I doubt whether this is a large/important effect, because a rider is a fair bit heavier (and higher) than any bike.

Another way in which mass may affect braking is that over-braking may (excess heat) burn out the brake -- but I think that's unusual and only tends to happen on a long down-hill, e.g. alpine touring, or possibly with cargo bikes or tandem cycles.

How hard can you brake

The article cited above says,

Very, very hard. We found that to get the shortest stopping distance, we had to pull the front brake lever with all our might. Witness the tester’s bulging muscles on his right arm [...] When we came to a stop, the smell of burnt brake pads wafted through the air. After 21 full-on emergency braking maneuvers, the Aheadset of the test bike had developed play [...]

Perhaps that's typical of road (racing) bikes, which are optimised more for going than for stopping. My experience is with hydraulic disk brakes (which are more common than rim brakes on cargo bikes, tandems, mountain bikes, touring bikes ), which feel like they could stop a truck (or at least, stop the front wheel without much effort, and therefore require a bit of caution in their use).

when we stop a bike,we convert its kinetic energy(energy due to motion) into heat due to friction of brakes,now kinetic energy is dependant on mass (1/2mv^2) so increasing the mass increases the kinetic energy and thus the stopping distance should INCREASE,assuming a constant braking force is applied,because the amount of energy it needs to disipate is more,consider a more intuitive explanation:imagine that the same force of the brakes is now applied on the pedals of a bike with more mass,it would take longer to reach the same speed as that of a bike with lesser mass.similarly you could conclude with respect to slowing down,cheers.

You have a great theoretical answer from CMS.

Friction as $F_{max} = \mu m g$ where $\mu$ is the coefficient of friction and $g$ assumes an ideal rubber and road. In practice if you double the mass the braking force may not fully double. The properties of the rubber can degrade. In normal rider weight range like 120 lb - 200 lb a rubber tires is close to ideal. You cannot extent this to 2000 lbs as the tire becomes highly deformed may not even hold the weight.

The other factor on a bicycle is taking the front tire to maximum friction would typically mean going out the top. If you add the weight low you can come closer to max friction on the front wheel.

Braking itself creates a force. The front tires gets more downward force and the rear tire more. Would be linear with on a ideal bike. I think max braking would be zero weight on the rear (negative would be going out the top). And this would need to occur right at max friction of the front tire.

I think the theoretical answer from CMS is correct but it assumes an ideal bike and ideal rubber/road.

In practice a heavier rider will take longer to stop.

Not the answer you're looking for? Browse other questions tagged newtonian-mechanics friction distance or ask your own question.

16
Is the distance between the Sun and the Earth increasing?
2
Effect of surface treatment on fair dice
0
What factors affect the velocity of an object moving down an inclined plane?
6
Will increasing or decreasing wheel size speed up an object?
1
Does the total mass of a wheeled object affect acceleration down an incline?
7
Can kinetic and static friction act at the same time for this object rotating inside an accelerating cylinder?
1
Should damping ratio increase or decrease with increase in mass?
1
Objects rolling down inclined plane at different speeds
9
Why do wheels roll if the force of friction does not depend on surface area?