Einstein's special relativity beyond the speed of light

First, the existing theory: we know that special relativity is based on the Lorentz transformations, which for uniform relative motion in the $x$ direction take the form

The motivating idea is that the velocity transformation law,

is not singular at $v = c$. This means (they argue) that you can meaningfully calculate the velocity of an object in two reference frames which are in relative motion faster than light. 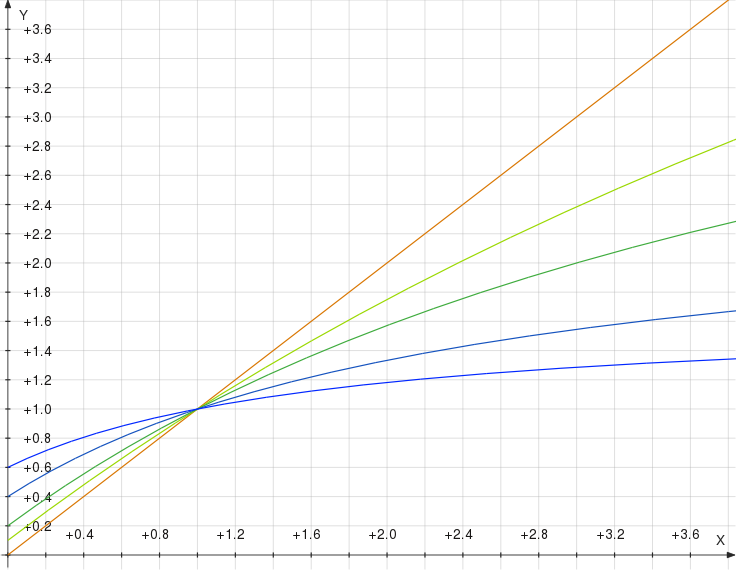 As the graph shows, a velocity calculated this way will always be faster than light itself, i.e. $v > c \implies u' > c$. This prevents objects from crossing the light speed "barrier," just as special relativity does.

The velocity transformation law extended to $v\to\infty$ gives $u'u = c^2$ (actually they use this argument backwards, starting from $u'u = c^2$ at $v\to\infty$). This implies that the "extended Lorentz" transformation they are looking for should reduce to $x' = \pm ct, t' = \pm x/c$ in the limit of infinite relative velocity. Working from these conditions and from the equations

(though I don't understand where they get those from), they come up with the new transformations

which relate velocities measured in frames with relative velocity $v > c$. They then go on to show some counterintuitive results involving combination of such velocities.

A simple way to understand what they are proposing is as follows: Lorentz transformations can be extended to $v > c$ by using $\frac{c}{v}$ in place of $\frac{v}{c}$ for superluminal relative velocities.

This extension to special relativity seems to make sense, at least in the sense that it is mathematically consistent, but it doesn't really have any physical applications as far as I can tell. It does provide a way to analyze events from the viewpoints of multiple observers with relative velocities greater than $c$, but special relativity tells use that no such observers can be made to exist (because nothing can be boosted past the speed of light), and I don't see that this new work does anything to change that.

TL;DR I think this work is interesting but not useful. I'm not sure if that was clear from what I originally wrote.

This is a trick that works in 2 dimensions, because the metric is

Which under a sign change, interchanges x and t. So if you have the ordinary Lorentz transformation

to produce an extended group with space and time interchangable. This is all they are doing. It works in 2d, because x and t are both 1 dimensional and the null directions are in 45 degree lines with the same topology relative to the t and x axis. This trick doesn't work in 3+1 d, because there are a different number of space dimensions, so the lightcones surround the t axis, but they don't surround the x axis.

This trick is not physically useful, beyond picking out the pure right-moving theories in 2d as special (and the pure left-moving theories too). These theories are special because they are preserved under certain of these space-time reflections too.

This idea is not physics, but it is a cute 2d oddity. A more interesting 2d oddity is covered in this question: Why does the Lorentz transformation in special relativity have to be like this?.

For information how the transformations look like see the answer by David.

Regarding physical meaning: Let us call the boost with velocity $v$ (one space dimension) $L(v)$. Then for $v>c$ $L(v)^{-1}\ne L(-v)$, but $L(v)L(-v)=-1$. Thus if you could reach velocities $v>c$ you could reverse time. Physically this is… questionable, it would violate causality including all the known paradoxa. And those transformations cannot be a symmetry of our universe (superluminal travellers wouldn’t obey the same laws of physics) because of the known parity violations. The largest subgroup of transformations of this group without time reversal (in fact the largest subgroup for which there is any pair of events with definite time ordering in every reference frame) is the Lorentz group without time reversal. And indeed there is no way to extend the Lorentz group without this so called “violation of causality”, see this paper.

Not the answer you're looking for? Browse other questions tagged special-relativity faster-than-light or ask your own question.

6
What is $c + (-c)$?
11
Why does the Lorentz transformation in special relativity have to be like this?
0
Can speed be defined in the complex plane?
1
Tachyons and Lorentz velocity transformation