Can we make a Maxwell's Demon using Quantum Computers?

Although I'm reasonably sure that quantum computing advances will not lead to the ability to construct a machine that globally violates the 2nd law of thermodynamics, it feels like a difficult position to defend when I see things like this: 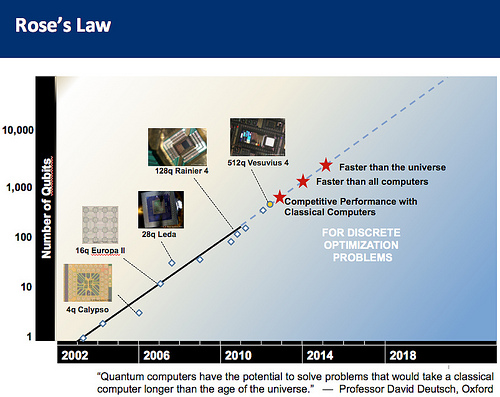 There's a proviso with this, while quantum computers could solve problems that would take a classical computer almost forever, it can't solve all problems. Wikipedia helped clarify this for me: 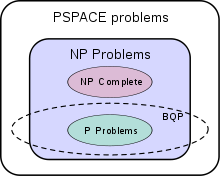 (BQP are problems solvable by quantum computers with polynomial time)

This image is to say, although quantum computers could solve every computing problem we have now and more, there are things it can't solve. But is THIS the reason we couldn't make a quantum computer into a Maxwell's Demon?

My biggest problem with a 10,000 Qubit computer is the internal memory. The Landauer limit dictates that any given memory transition must expend at least $k T \ln 2$ of energy to make the transition, otherwise it then violates the 2nd law. What is the "internal memory" analog to such a massively powerful quantum computer? Would it also be subject to this limit, or would the internal states, never actually existing in a way, circumvent it?

So let me narrow the question, looking at the idea of Maxwell' Demon:

Let's formalize this to say that we have some observable vector $\vec{y}$, that we get from sensors in the $A$ gas. We then take that information, process it, and apply the information to a decision vector $\vec{u}$, which in the above image is a single Boolean open/shut decision. What is the reason that we can not build this with a quantum supercomputer? My guesses are:

As you can see, none of my explanations are consistent. Is the universe big enough for both superpowerful quantum computers and the 2nd law?

Quantum computer performs unitary, reversible operation so it is not a subject to Landauer's principle until the reading the final result.

Still operation of Maxwell's demon cannot be reversible, as it needs to conduct measurements.

If you make a Maxwell's Demon using a quantum computer, you may find that it is actually a heat engine operating on the difference in temperature between the system and the quantum computer's memory. (For you to analyze it this way, it might help assume a very small energy difference between a 0 bit in memory and a 1 bit.)

As soon as the memory fills up (in thermodynamic terms, reaches the same temperature as the system), the Maxwell's Demon will stop working.

The energy of quantum systems encodes redundant information. If a quantum computer were used to to emulate a vast number of physical systems this might be possible.

Not the answer you're looking for? Browse other questions tagged thermodynamics quantum-information or ask your own question.

2
Theoretical or experimental violations of the 2nd Law of Thermodynamics?

13
How does Landauer's Principle apply in quantum (and generally reversible) computing
6
To what extent is it true that quantum computation cannot be simulated on classical computers, and how can we prove it?
1
Do we have algorithms that are polynomial on a Q-Computer but not poly. on a classical Computer?
3
Why is it necessary to irreversibly erase a memory?
4
Are quantum computers able to simulate every physical process that a classical one can simulate?
4
Does the act of storing information (not its erasure) locally increase entropy in Maxwell's demon's memory?
2
Problems with Maxwell's demon