The Z-Torque: how can it be shown intuitively that it does not work?

There is a new kickstarter project that claims to increase torque and power compared to a normal crank on a bicycle (Z-Torque on kickstarter). If this patented (US Patent Number 5899119) approach works it would be a revolution for personal transport. 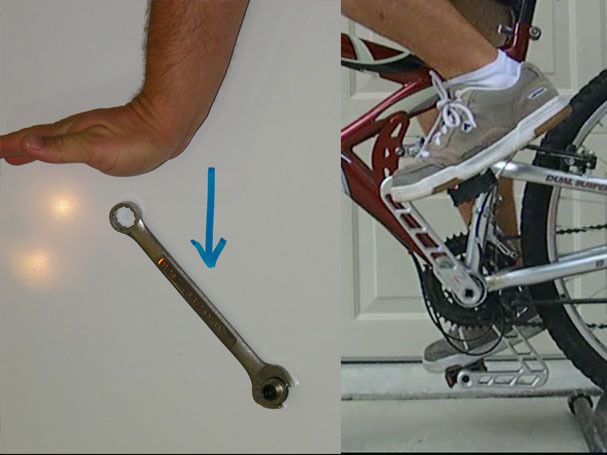 The idea behind this is that a Z-shaped crank should allow somehow better leverage compared to a straight crank. There are quite a few comments that this should not work as intended but as in a lot of cases it sounds plausible at first but it is incompatible with physics. As the inventor and some of the supporters are convinced that this actually works I am looking for a clear and simple argument why this is not possible.

Using vectors and cross products ($\tau = \vec{r}\times\vec{F}$) this is easy to show but can it be shown with as few abstractions as possible?

Since the crank is rigid and symmetrical, just draw a straight line connecting the footpads through the center. The radial distance of the footpad from the center is the length of the torque arm. If you were to replace the Z-crank with a standard crank that had the same torque arm length, the torque felt at the center of the crank would be the same.

For an observable demonstration, all you would have to do is have the rider stand on one pedal. With all of the rider's weight on one pedal oriented at the 6 o'clock position, it would be obvious that the force from the pedal is acting on the crank spindle in a straight line, and the "elbow" of the crank has no significance.

For claims like these, I think it is important to get somewhat specific about what claims are actually made. The claims are argued with logic, and as such, the claimant will eventually run into contradictions - which are the same observations that led to development of real physics. I would argue that in most cases throughout human history, the claimant then alters the story to either:

My favorite example of #2 is Thorium laser powered cars. If you start reading, you will find articles written by people with no relevant knowledge. However, if you follow the rabbit hole on the internet long enough you'll rind references to actual science that proposes accelerator driven subcritical Thorium reactors, where the "laser" is really charged particle beams, but the innovations that allows it to be done with lasers, without producing fission products (completely absurd), and small enough to put in a car - that's secret. This point is also suspiciously close to where you'll find the donate button. That was a bit of a tangent.

After watching the videos, I'm convinced this is a case of #1. I will argue this by using these two diagrams from his video. 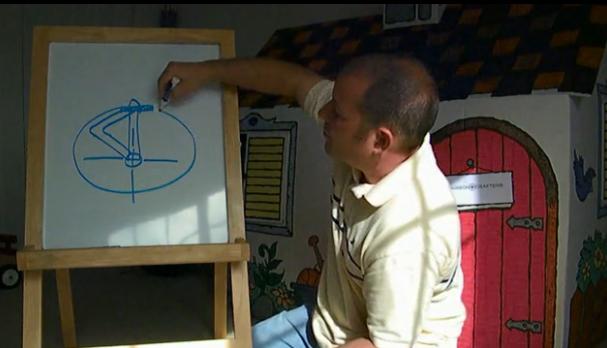 This is the same thing shown in the question. I wanted to be sure that the interpretation of the claim was correct. It is. Here is the 2nd part of the argument. 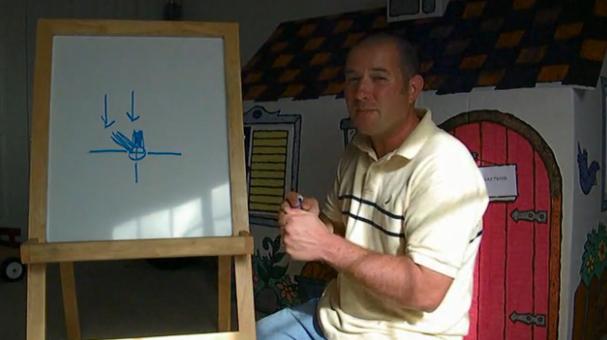 I would argue this as somewhat of a "smoking gun". Let's say $\theta$ is the angle from the vertical where the foot lies. He is actually arguing that when $\theta=0$ the torque is non-zero when using the z-crank, although it is zero when using a normal crank.

If one's college level first-year physics class did its job, they should be able to disprove the claim with this information, as it is plenty sufficient. The above thinking represents a fundamental misunderstanding of the physics at work. We need not look at the rest of the claims, or his approach that you can use a:

His point form the above two images is sufficient to refute the claims. The core misunderstanding is believing that the "torque" comes from the direction of the crank material locally to the shaft. No, torque is based on where the force is applied from. The foot applies the force. The pivot is still in the same place. The pivot is in the same place, the force is in the same place (establishing $\mathbf{r}_1=\mathbf{r}_2$), is the same magnitude, and is in the same direction (establishing $\mathbf{F}_1=\mathbf{F}_2$) - the torque of the two cases is the same ($\boldsymbol \tau = \mathbf{r}\times \mathbf{F}$). He says it's not. I'm finished, because the entire point of the Kickstarter project is built on the idea that they're not.

Assume that the length of the crank in itself, not the length between the footpads and the center, is what matters in determining the force applied. Following this assumption, a two-meter bent-beyond-recognition crank would be even more effective. Showing that the "intuitive" belief that "longer crank = more power" does not hold.

Alternatively, following the initial, wrong, assumption, we could also construct a crank which was basically a square - four bends to the same direction, with a slight sideways curl to allow one side of the square to pass its cousin. This crank should also, according to the nutjob theory, be more efficient. Now, ask why a seriest of bolts connecting the two sides running right next to each other would make one lick of a difference...

There's a very simple way to explain this to a skeptic.

Suppose the crank starts out as a simple rigid rod of some very strong material, like steel.

Then suppose some material is added to one side and removed from the other, changing its shape a little. Does that change anything?

Suppose that process continues, and a lot of material is removed from one side and added to the other. Does that change anything?

EDIT: Another way to look at it. Suppose you start with a diamond-shaped piece of steel. It acts like the original crank, right?

Then you remove material from the center, leaving a picture-frame shape. Does this act any different from the original crank?

Then cut away one side of it, leaving a V-shape. Now does it act any differently?

The behavior of the crank is the same, whether it is straight or misshapen, assuming the material is strong enough to be rigid. The distance between the two end pivot points remains the same, so from the viewpoint of the pedal and center pivots it is indistinguishable from the straight crank.

Not the answer you're looking for? Browse other questions tagged classical-mechanics education or ask your own question.

2
How can I understand work conceptually?
0
Can/Does angular momentum apply a torque?
0
Is torque energy? Does the Poynting vector have anything to do with torque?
2
How does a Foucault pendulum work?
3
Where does a torque-invoking force belong in work energy theorem?