According to my knowledge, heat is nothing but the result of the vibrations of atoms and molecules. I guess this mean that in heating up a gas or liquid, we are increasing the rate at which the container of this gas or liquid vibrates, thereby imparting to the molecules a certain amount of energy.

How would this work in case of a burning log in the fireplace? Is it vibrating and thus heating up the molecules in the room? Or is it releasing highly energetic photons that do the required bombarding? What exactly is happening when we light a fire? 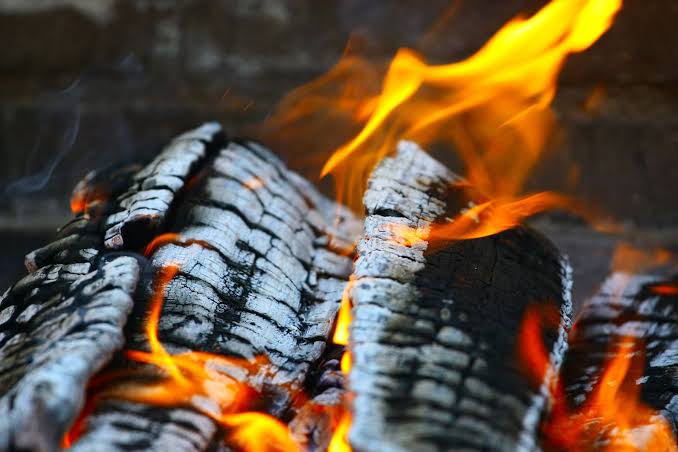 The key thing to know about burning a log of wood (or indeed anything) is that it isn't the wood that is burning. The combustion occurs in gases released by the wood as they react with the atmosphere. That's why you need a fair bit of heat to get wood burning in the first place. If you watched the combustion closely you'd see gas molecules given off by the hot wood reacting with oxygen molecules in the air. The reaction produces energy and the energy is carried away as increased velocity of the reaction produces (mainly CO$_2$ and water).

So as a result of combustion we now have reaction product molecules moving in random directions at very high speed, and of course this is exactly what we mean by a hot gas. There are three things that can happen to our fast moving gas molecules:

You might point out I haven't mentioned the radiant heat that you can feel on your hands and face as you face the fire. The radient heat isn't coming from the flame, or at least only a very small part comes directly from the flame. The heat is coming from the wood, grate, fireplace and anything solid near the flame, because those solids have been heated by the fast moving reaction product molecules. This is the black body radiation mentioned by Luboš Motl in his answer (which I can't improve on so I'm not going to try!). It might be worth adding that black body radiation arises because the particles, electrons and nuclei, in a solid are charged, so as they vibrate they emit electromagnetic radiation. This is how mechanical vibrations get converted in electromagnetic (infra-red) waves.

Both. At temperature $T$ (absolute temperature in kelvins), every "degree of freedom" carries some amount of energy equal to $kT/2$ in average. By a degree of freedom, one means either one Cartesian coordinate of one atom – or another particle that is effective "free" – or one angular coordinate for a rotating object whose rotations can actually be distinguished from the rest.

For gases, this energy is stored mostly in the kinetic energy of the individual molecules (or atoms). The hotter the gas is, the more they move, $mv^2/2\sim kT$ in average. For liquids, it's similar except that the molecules are constantly hitting others. For solids, the energy is stored in vibrations of atoms or molecules, but they mostly vibrate in the very vicinity of prescribed positions only, like harmonic oscillators of a sort.

At the same moment, at tempeature $T$, all objects – solids, liquids, gases etc. – also radiate (a large number of) photons and any other radiation corresponding to this temperature. Well, that's true for black bodies: the emissivity may be affected by a frequency-dependent function for "colorful" or "shining" or "reflective" bodies.

Whenever the energy is stored only in one of the vibrations or radiation of the kinds listed above (or any other forms of energy that a system may have), it means that the system isn't in thermal equilibrium but it will do everything it can to achieve the equilibrium, so the energy (heat) will be drifting from the degrees of freedom that carry greater energy than others, to these others.

Trees come from the air. Oxygen has a high infinity for carbon. Fire is stored sunshine.

Feynman on the Science of Fire

There will be heat transferred from the hot contents of the fireplace to the cool room by three mechanisms of heat transfer: conduction, radiation, and convection.

I think only the first two have been mentioned so far: conduction and radiation.

The majority of heating of the room by the fire may be accomplish by warm air moving and mixing with cooler air in the room.

The best fireplaces are built with ducts that wrap around the hot sides of the firebox to take maximum advantage of this.

Mostly your skin directly is receiving radiated photons which is perceived as heat.

Not the answer you're looking for? Browse other questions tagged thermodynamics statistical-mechanics everyday-life physical-chemistry combustion or ask your own question.

0
How to thermodynamically understand process of burning a piece of coal?
1
What explains the 'stripy' pattern on a burning wood log?
11
Why doesn't the gravitational energy in this system of evaporating and condensing water violate the second law of thermodynamics?
3
Pressure=Heat? Else, Heat=Radiation?
6
The process of burning and increasing weight
3
Does burning something with higher temperature make the burning faster?