When sound travels through a medium, its intensity diminishes with distance. In idealized materials, sound pressure (signal amplitude) is only reduced by the spreading of the wave. Natural materials, however, all produce an effect which further weakens the sound. This further weakening results from scattering and absorption. Scattering is the reflection of the sound in directions other than its original direction of propagation. Absorption is the conversion of the sound energy to other forms of energy. The combined effect of scattering and absorption is called attenuation. Ultrasonic attenuation is the decay rate of the wave as it propagates through material.

As user45664 notes, attenuation is the summation of all kinds of losses, including absorption, scattering, or reflection.

There's good evidence that ultrasound is absorbed by macro-molecules in human tissues:

Ultrasonic absorption coefficients have been determined over a wide frequency range in all cases and found to be largely independent of the degree of cellular and subcellular destruction, suggesting that more than two-thirds of liver tissue absorption originates on a macro-molecular level including submicroscopic particles such as ribosomes and aggregations of macromolecules.

Let's consider this intuitively for a for a moment. In human tissues there's (typically) a linear increase in the attenuation of ultrasound with frequency from $0.3$ to $10$ MHz. If we take the speed of sound in human soft tissue to be $1540 \frac{m}{s}$, we can estimate the wavelength of the ultrasound:

Which - at the smallest - is still an order of magnitude larger than most eukaryotic cells ($2 \cdot 10^{-5} \ m$), but small enough where it should be apparent that the size of the wave is approximately the same as structures within the tissue. This will tend to cause resonance of those structures, and a loss of acoustic energy proportional to the number of structures along the path.

Waves with lower frequencies will not have as pronounced of an effect.

In addition, frequency matters for scattering. These UNC lecture notes on the Acoustics of the Body are helpful in visualizing why scattering tends to happen more for high-frequencies than low: 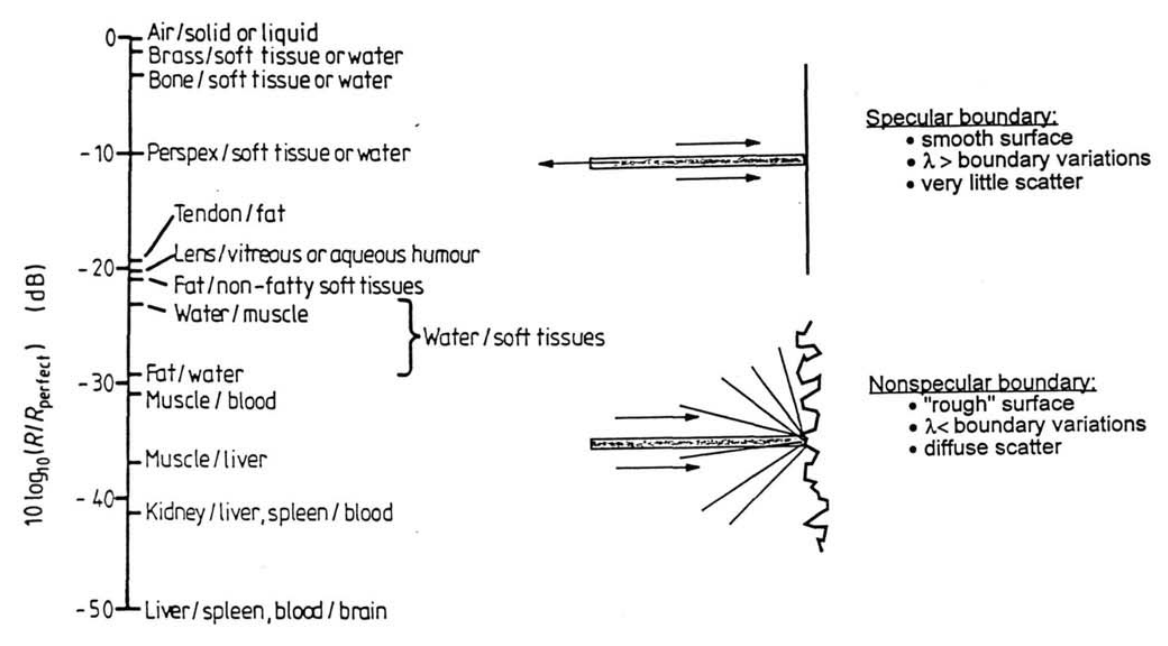 For the so called nonspecular boundaries of different tissues (of which the kidney's many nephrons are a great example,) the size of the bumps and crenelations of the tissue boundary scatter wavelengths smaller than them. This also causes increased attenuation for smaller wavelengths.

4
What characterizes a metallic sound, and why do metals have a metallic sound?
1
Why does sound become louder and increase frequency if I give it a narrow path?
1
Why is the sound channel in the ocean especially good for low frequency sound?
6
Physically, why are high sound frequencies more easily absorbed than low sound frequencies?
1
Why isolation increases with lower frequency in stiffness region?
2
How does frequency relate to attenuation and why?
0
How does acoustic impedance change with frequency of the wave and thickness of the medium?
3
Why is sound attenuation greater in dry air than humid air?