Is this interpretation of quantum fluctuation in eternal inflation in Wikipedia correct?

But from Sean Carroll’s article,

Eternal inflation is a different story. The idea there is that the inflaton field slowly rolls down its potential during inflation, except that quantum fluctuations will occasionally poke the field to go higher rather than lower. When that happens, space expands faster and inflation continues forever. This story relies on the idea that the “fluctuations” are actual events happening in real time, even in the absence of measurement and decoherence. And we’re saying that none of that is true. The field is essentially in a pure state, and simply rolls down its potential

So, I asked a friend of mine who knows QFT and he said

I never liked the concept of quantum fluctuations, especially when it comes to cosmology. In QFT, the fields always roll down to the exact minimum of the potential. It doesn't fluctuate in any meaningful sense. But the potential is the quantum mechanical one, not the classical one. The quote in the wikipedia may be a vague way to say that the classical potential acquires quantum corrections. Whether that picture is useful or not is beyond me.”

The inflaton field rolls down a potential that is modified by quantum effects. The latter are determined by corrections typically computed in perturbation theory in terms of vacuum correlations.

The latter can be named vacuum fluctuations, but this is highly misleading as it has nothing to do with fluctuations in any temporal sense. See the detailed explanations towards the end of my article https://www.physicsforums.com/insights/physics-virtual-particles/

The classical inflaton potential does receive quantum corrections from the other fields in the theory, but quantum fluctuations of the inflaton field itself have much greater significance during inflation. As a quantum field, the inflaton exhibits fluctuations about its classical trajectory, $\phi(x,t) = \phi_0(t) + \delta \phi(x,t)$. The result is a sort of fuzziness to the trajectory: 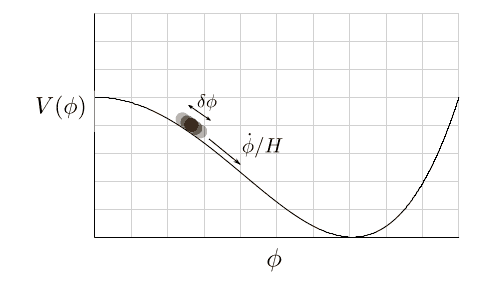 The fluctuations cause the inflaton to roll down the potential at effectively different rates at different places in the universe, with the result that inflation ends at different times, $\delta t$, in different places. Via the continuity equation, this gives rise to a density perturbation, $\delta \rho/\bar{\rho} \propto H \delta t$.

Not the answer you're looking for? Browse other questions tagged quantum-field-theory cosmology cosmological-inflation multiverse or ask your own question.

0
Why do “Quantum Fluctuations” need Inflation to grow into cosmic scales?
1
How to calculate the scalar amplitude when two inflations happen successively?
6
What is a slow-roll field?
2
CMBR isotropy after inflation
0
What is the difference between a quantum fluctuation and a singularity in the beginning universe?
3
What causes fluctuations in the inflaton field value?
2
Quantum fluctuations producing CMB fluctuations also cause inflation to be eternal?