In A Banked Turn, How Much Of A Part Does Gravity Play As Compared To The Normal Force?

Um, this is my first question here, so I'm really sorry if there's something wrong with it! Anyways, what I'm kinda confused about, actually stems from a comment on another question here: Looking for an intuitive understanding of normal force

The comment says and I quote "In the particular situation you're considering, note that the ball is accelerating. Whereas in the first case you have a static situation --- one in which the net force on the ball must be zero --- in the second the ball is moving in a circle. This continual change of direction requires a certain force to maintain. This force can come from two places --- gravity and the normal force. These must combine in such a way not as to make zero, but as to make some inwards pointing force that causes the ball to accelerate."

What I'm really confused about is when the comment says the force for the centripetal acceleration can come from 2 places, gravity and the normal force. So I wanted to know how much of a role does gravity play based on, say, the angle of the ramp, such as in the picture below? (this is actually the same picture as in the post linked) 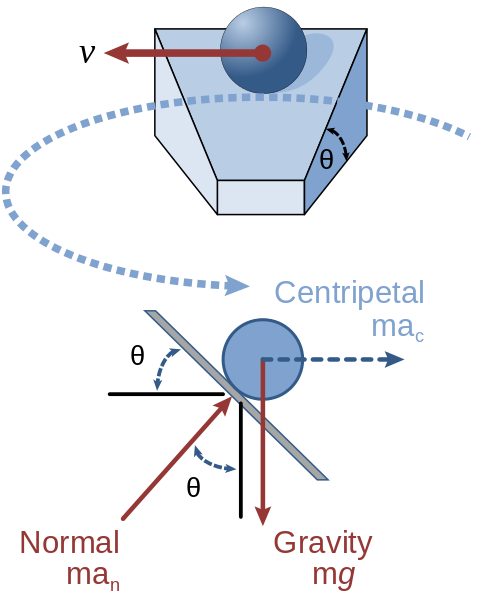 I've also read through alot of problems concerning similar cases but so far, I haven't found one that really talked about this. The comment in the link above is the closest thing I've found to explaining it.

That sentence a bit unfortunate.

So where does gravity come it to the matter, then?

The hidden assumption here is that the ball's track is level—it neither rises nor falls as it makes it's way around the bank. And that means that the vertical component of the normal force is equal to the weight of the ball: $$n_y = n \cos\theta = mg \;. \tag{2}$$

Now, I wouldn't say that the sentence that is bothering you is bunk: the net force is, indeed, found by adding the weight and the normal reaction. But as the direction of gravity is perpendicular to the plane of the circular motion any wording that suggest gravity is part of the centripetal force is confusing. Instead, gravity's role is in balancing the non-centripetal component of the normal—which is not something that you can ignore in working the problem, but is indirect.

For completeness when you combine equations (1) and (2) to eliminate the normal force you get $$ g \tan\theta = \frac{v^2}{r} \;,$$ which can be manipulated to find the answers to most problems posed for these kinds of questions.

Aside In questions where I ask student explicitly to draw free body diagrams would mark points off for drawing the normal reaction with the tip on the object affected, and writing the normal force as $m a_n$ looks very strange and pedagogically suspect to me.

For a wider perspective let me introduce another view.

The circular motion of the ball is along the curve of a banked circuit (like a car racing on the Brookland race circuit.)

The common factor is that each case the normal force purely responsive. The surface that the ball is contact with doesn't budge; if something pushes against that surface it pushes back with equal and opposite force. It always acts in response. Gravity on the other hand, is what it is.

Now to the specific case you ask about.

To examine what gravity is doing let me remove it (temporarily).

Obviously, without gravity then in order for the ball to move along a circle the bank must be at right angles to the plane of the circular motion. Without gravity all of the required centripetal force is provided by the normal force.

But hang on, is the case with gravity different in that respect?

With gravity the normal force has two jobs to do: it must oppose gravity, and it must provide the required centripetal force.

Then again:
If you don't change the angle of the bank: on the Moon, with its weaker gravity, the same ball with the same speed will move along a circle with a larger radius, because for a given angle of bank the amount of gravity determines how much centripetal force is available.

5
Looking for an intuitive understanding of normal force

0
Formula for a ball rolling down an Inclined Plane
1
Forces and angles
1
Homework - Calculating normal force with additional accelerations (besides gravity)
4
Normal force not perpendicular to the surface
1
How does normal force work?
1
Horizontal acceleration of an object moving down a parabolic track