These three questions are similar but I think the answers will be different for each one:

If a magnetic monopole falls into a schwarzchild black hole, what happens to the magnetic field? Here there would be only radial magnetic field lines leaving from the event horizon to infinity. So if magnetic charge is counted as charge this should be no problem. But if the black hole were rotating wouldn't that produce an electric dipole field?

Here is some of the text and figures from that paper that describe how the magnetic field is expelled:

Our final and most comprehensive test is represented by the collapse to a BH of a magnetized nonrotating star. This is more than a purely numerical test as it simulates a process that is expected to take place in astrophysically realistic conditions, such as those accompanying the merger of a binary system of magnetized neutron stars [26, 27], or of an accreting magnetized neutron star. The interest in this process lays in that the collapse will not only be a strong source of gravitational waves, but also of electromagnetic radiation, that could be potentially detectable (either directly or as processed signal). The magnetized plasma and electromagnetic fields that surround the star, in fact, will react dynamically to the rapidly changing and strong gravitational fields of the collapsing star and respond by emitting electromagnetic radiation. Of course, no gravitational waves can be emitted in the case considered here of a nonrotating star, but we can nevertheless explore with unprecedented accuracy the electromagnetic emission and assess, in particular, the efficiency of the process and thus estimate how much of the available binding energy is actually radiated in electromagnetic waves. Our setup also allows us to investigate the dynamics of the electromagnetic fields once a BH is formed and hence to assess the validity of the no-hair theorem, which predicts the exponential decay of any electromagnetic field in terms of Quasi Normal Mode (QNM) emission from the BH.

As the collapse proceeds, the restmass density in the center and the curvature of the spacetime increase until an appararent horizon is found at t = 0.57 ms and is marked with a thin red line in Fig. 12. As the stellar matter is accreted onto the BH (the rest-mass outside the horizon $M_{b, out} = 0$ is zero by $t \geq 0.62$ ms), the external magnetic field which was anchored on the stellar surface becomes disconnected, forming closed magneticfield loopswhich carry away the electromagnetic energy in the form of dipolar radiation. This process, which has been described through a simplified non-relativistic analytical model in Ref. [52], predicts the presence of regions where |E| > |B| as the toroidal electric field propagates outwards as a wave. This process can be observed very clearly in Fig. 13, which displays the same three bottom panels of Fig. 12 on a smaller scale of only 15 km to highlight the dynamics near the horizon. In particular, it is now very clear that a closed set of magnetic field lines is built just outside the horizon at t = 1.0 ms, that is radiated away. Note also that our choice of gauges (which are the same used in [61]) allows us to model without problems also the solution inside the apparent horizon. While the left panel of Fig. 13 shows thatmost of the rest-mass is dissipated away already by t = 0.65 ms (see discussion in [62] about why this happens), some of the matter remains on the grid near the singularity, anchoring there the magnetic field which slowly evolves as shown in the middle and right panels. 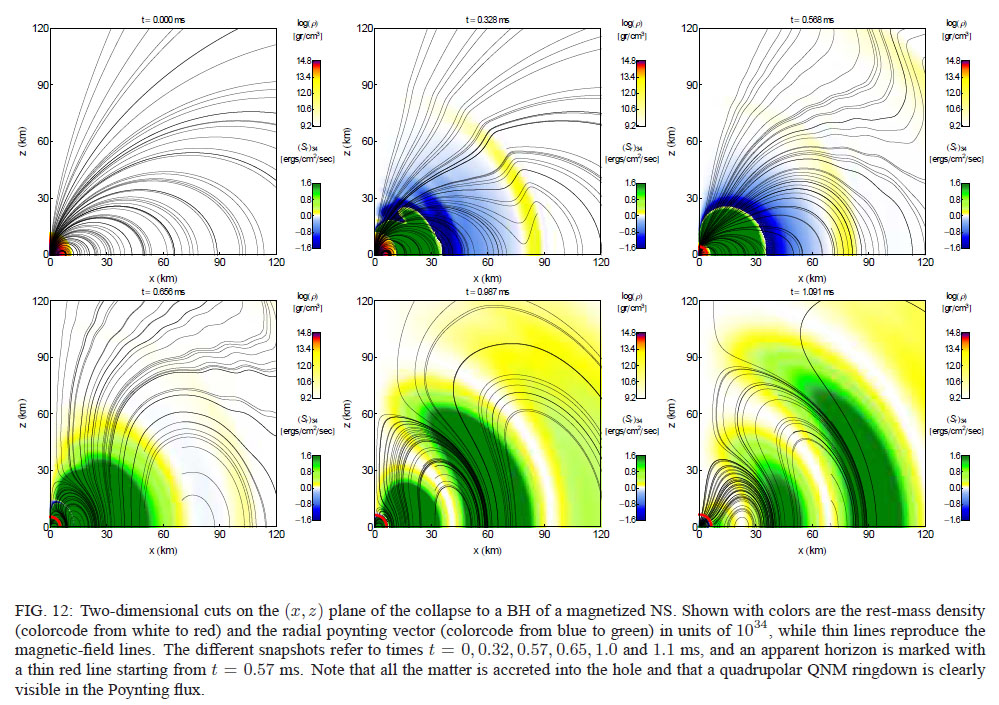 Not the answer you're looking for? Browse other questions tagged electromagnetism general-relativity black-holes or ask your own question.