Let's say there is a train passing in front of me with a velocity $v=3c/5$ and proper length $L_0$ and let's say there are two clocks on the train: one in the front, and one in the back. When the back clock passes me, our clocks both indicate 0 and I want to find out then what will the clock in the front indicate in my frame of reference.

Here's a spacetime diagram on rotated graph paper
which may help visualize the result you obtained and help develop a strategy for getting the result from time-dilation and length contraction.

Geometrically, the gamma-factor $\gamma$ is the ratio between the adjacent leg and the hypotenuse [which is $\cosh\theta$ in terms of the rapidity $\theta$]. 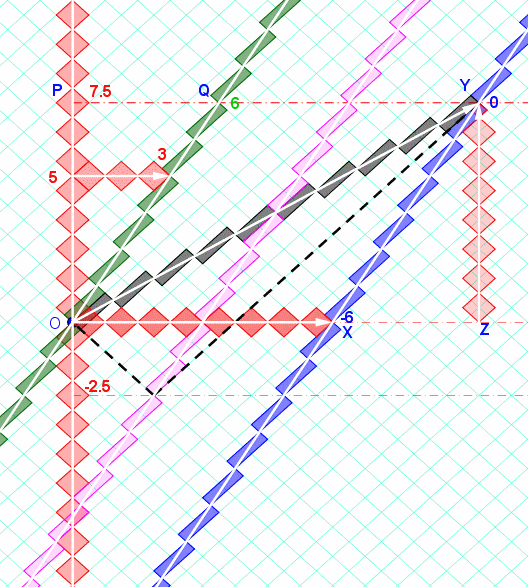 Hint: What we want to know is $t$, not $t'$. Because we measure the time of the clock in front of train in our frame. In addition, the clocks in the train should be synchronized in the frame of the train. Okay.

EDIT : Your calculation is correct. I made mistakes. My approach is just about the back of the train.

So, you confused two situations.

First, what you solved is about this. When $t=0$, every people in $x$-axis check the train's clock and they shared their result. Then, the clock in the front side is what you calcualted.

Second, What the link said and you confused about is the time(measured in our frame) in front of the train when $t'=0$

Two situations are obviously different unless the train has no length. In the second situation, you could get the result that the clock of the back is earlier than the clock of the front side. (In here, time is measured in our frame.)

So, the hint is for the second situation.

It is because, when you see the syncronization of the time in the train, in our frame, we saw the signal light to the back side arrive faster than to the front side.

The clock in front shows an earlier time than the clock at the back. That is how you see the train shorter than its proper length.

If you noted where the back of the train was, and waited until the clock at the front showed that same time before noting where the front is, you would see the proper length of the train stretched in your reference frame. At that time instant on the train, its occupants would see you Lorenz contracted.

Simultaneity in one frame is smeared in the other.

Not the answer you're looking for? Browse other questions tagged special-relativity inertial-frames lorentz-symmetry or ask your own question.

3
Airplane example of special relativity
1
Length contraction and simultaneous length measurements
1
Why don't clocks on a train read the same time?
3
Derivation of Relativity of Simultaneity
0
When are events frame independent and why?
1
Question regarding Lorentz Transformation and Space Contraction- Contradiction