Capillary Rise and a Surfactant - Experiment

Proposed Experiment: Consider a capillary tube, dipped in a container filled with water (Assume that the tube doesn't topple over or sink, it is fixed in its position somehow). It is obvious that we will observe some rise of water in the capillary, attributed to surface tension (popularly known as capillary rise).

Now, fill a dropper with soap solution. Add the solution dropwise (and slowly), to the mouth of the capillary, so that it falls on the meniscus drop by drop.

What happens next? Does the level of the capillary fall immediately, or does it take some time for it to happen? Could someone please explain the phenomenon properly? I've read that soap solution decreases the surface tension of water, and I concluded that addition of soap should lead to a decreased height of the column in the capillary.

P.S. For reference, here's something I learnt in Physics by Resnick Halliday and Krane:

P.P.S. If possible, someone, please share a video of the experiment! I couldn't really find one online, so maybe y'all could record one and post it so all of us at Physics SE could see it happen! (After all, what better way is there to learn Physics than experiments?)

We have to make a few assumptions here. The first would be that the soap solution mixes with the water evenly and instantaneously in the capillary - this would be a good approximation, as it's a fairly small volume in the tube, on a similar order of magnitude to the volume of the drop. The next is the form of the meniscus: 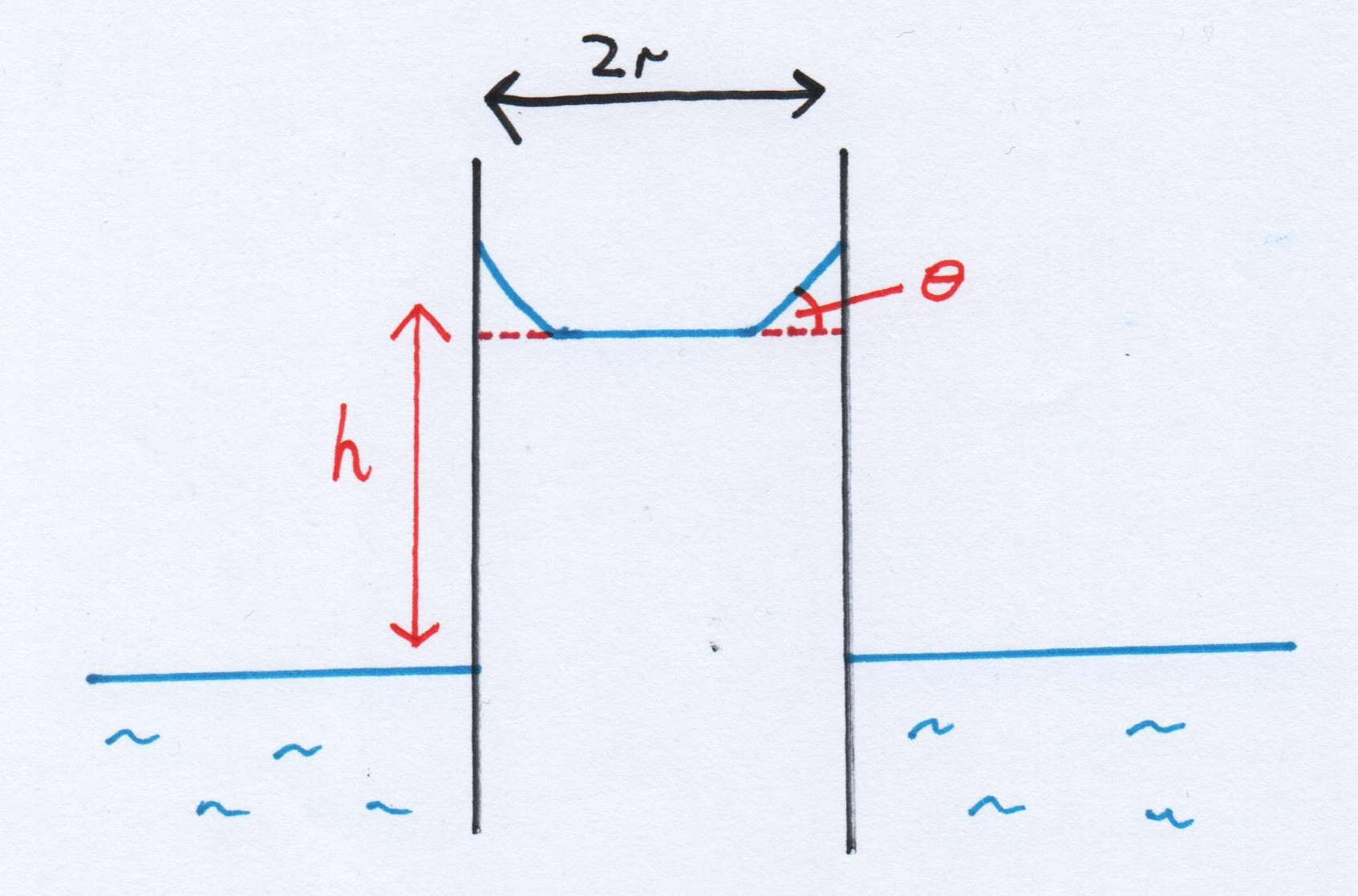 Please excuse my crude diagram! You can see that the meniscus is approximated to have a flat bottom, with the sloped sides making an angle $\theta$ - this is symmetrical. The difference in the liquid height from the surface of the body to the meniscus will be $h$. The capillary will have a radius of $r$.

Then, we also take the difference in the gravitational potential energy in changing the height of the liquid:

where $\rho$ is the density of the liquid, and we take the centre of mass of the liquid in the capillary to be at $h/2$.

So, the free energy of the meniscus is given by

We have a stable meniscus when this is minimised, so we differentiate it with respect to $h$, and set that equal to zero, giving

We can then substitute in the Young Equation, finally giving

The surface free energy of the liquid-gas interface, $\gamma_{lg}$, will be determined by the soap, which would also alter $\rho$. Also, note that $\theta$ can be negative - in this case the level in the capillary would fall, which would be the case with soap using the numbers you gave.

With these assumptions, the water level would change near instantaneously - though it may require some mixing.

Not the answer you're looking for? Browse other questions tagged fluid-dynamics experimental-physics surface-tension capillary-action or ask your own question.