On any spacetime $(M,g)$ we can form the causal ordering $\leq$, where for any two points $a,b \in M$ we have that $a \leq b$ iff there exists some future directed, non-spacelike curve from $a$ to $b$. This causal ordering is transitive, irreflexive, antisymmetry and dense in general. However, causal oddities like CTC's manifest as violations of irreflexivity and antisymmetry.

I'm interested in the directedness of the causal order (unfortunate name, I know). Recall that a relation $\leq$ is directed iff for any two elements $a,b \in M$ there is some third element $c \in M$ such that both $a \leq c$ and $b \leq c$.

I can see that a Minkowksi space has a directed causal order. I have no proof, but the picture below is good enough to convince me. Clearly anything in the shaded area will serve as the witness for the condition. Note also that the condition is trivially met for timelike or lightlike-related points. 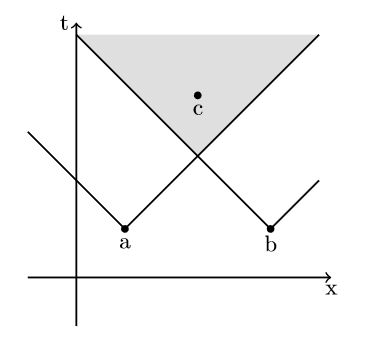 While the example of de Sitter space is a classic one, there is an even simpler example that doesn't require computing geodesics.

Take two dimensional Minkowski space, and remove the line $\{ (x,t) | x=0, t \geq 0 \}$. Any event $t \geq 0$ will have its future lightcone restricted to either positive or negative $x$. Then picking any two points on either side of the singularity will produce future light cones that never intersect.

Not the answer you're looking for? Browse other questions tagged general-relativity spacetime causality or ask your own question.

2
Numerical relativity in causally pathological spacetimes
2
In the Causal Set theory, what actually is a causal set?
3
Strong causality in Choquet-Bruhat's “GR and the Einstein Equations”
3
Definition of naked singularities
0
Accelerated spacetimes in type D spacetimes
9
Simplest mathematical model of a causal loop
3
In a globally-hyperbolic spacetime, does every pair of elements have overlapping light cones?
0
In the most trivial spacetimes, is the existence of a null geodesic equivalent to horismos relations?