How do you physically measure voltage and current?

Short Version: How exactly do (modern) voltage/current meters measure the numbers they do, from first principles? References much appreciated.

We measure length with a ruler, time with a clock, and mass with a scale. The units of such quantities are all relative to some commonly accepted standard, i.e. a stick of a fixed length, a certain interval of time, a certain amount of water at fixed conditions, etc. These quantities are relatively easy for us humans to understand.

But what about voltage and current? I understand how you can define electric fields experimentally - get a certain amount of charge on an object, and measure the force (response) felt by that charged object. Similarly with magnetic fields - send some charges through a magnetic field and measure their response. To measure the voltage across two points, I suppose you could connect some small "resistor" in between two points and measure how hot it gets under certain fixed conditions (maintained within your measurement device).

I'm sure my intuition on all this "phenomenology" of voltage and current is based on 19th century equipment, but that's the only equipment I ever see intuitively broken down. Modern electrical equipment is more mysterious (owing to its inherent complexity I'm sure).

Every time I try to look for an explanation of how multimeters really measure voltage and current, I'm met with circular explanations like "You measure voltage by connecting a resistor in parallel and measuring the voltage drop across it, or current passing through it" and "You measure current by connecting a resistor in series and measuring the voltage across it". Please, I just want an intuitive and direct answer. I would also very much appreciate a reference to some article/discussion on this.

An analog ammeter, called a galvanometer, passes current near a bar magnet which is physically attached to an indicator needle. A magnetic field surrounds the current, whose strength is proportional to the magnitude of the current, and so the angle of the needle changes. A clever calibrator paints marks under different locations under the end of the needle corresponding to different currents in the galvanometer.

I believe that all analog meters are, at their heart, galvanometers; I'd love to be corrected.

Digital meters are based on the transistor. There are a lot of different devices which can be called "transistors," and a lot of configurations of the same transistor that can do different things. A common configuration is for the transistor to act as a current-controlled switch (for bipolar transistors) or as a voltage-controlled switch (for field-effect transistors), where the current or voltage into the "base" terminal of the transistor determines whether the path between the "emitter" terminal and the "collector" terminal is insulating or conducting. You can use a collection of transistors to build a comparator, a digital device whose output is "high" or "low" depending on which of its inputs is at higher voltage, and you can use a series of comparators with related reference voltages to build an analog-to-digital converter.

I'm pretty sure the most common multimeters on the market are analog-to-digital converters built from field-effect transistors, which are at their heart voltage-measurement devices.

Short answer: Deflection due to magnetism or digitize voltage.

(The majority of) Analog meters are based upon the D'Arsonoval meter movement. This is just a galvanometer, which causes deflection, due to current.

The D'Arsonoval meter movement works like an electric motor. Permanent poles and iron segments form a horseshoe magnet. A coil (made from Manganin or Constsntin wire to make the meter temperature insensitive) is formed around, but not attached to, a cylindrical iron core. 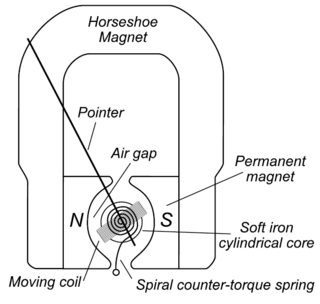 All circuits are designed to limit the current to 1mA, Full-Scale current. Add a 0.1001Ω shunt resistor in parallel and an appropriate analog scale and the meter becomes an 1A ammeter. 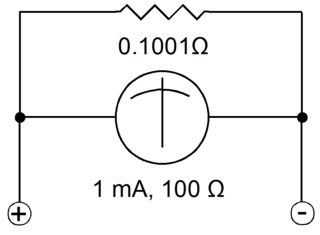 All analog meters have an error (1% to 3%) because they steal current from the circuit they measure.

Digital meters are even simpler. At their core, they have an Analog to Digital convertor. The input is applied to a high impedance resistor. Input is compared with a reference voltage and converted to digits. Current uses an internal shunt resistor to generate a voltage for conversion. Errors depend on scale and are usually ± last digit. 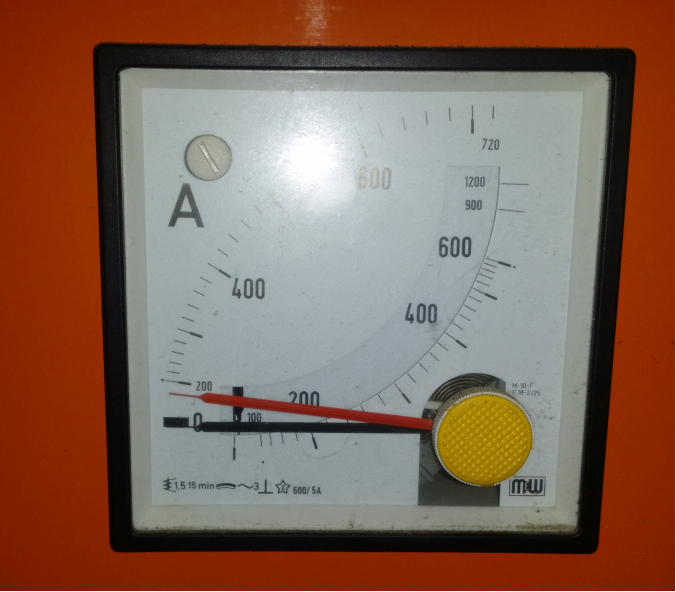 These operate on a thermal basis, similar to a circuit breaker. Current flowing through a coiled element heats it up, causing it to expand and move the needle. This coil can be seen behind the yellow knob.

Maximum demand meters are used because the thermal element has an averaging affect, allowing it to ignore short-term spikes like elevators or starting of large motors. The value given is more indicative of how hot the various upstream components of an electrical installation are, which is the main limiting factor in the maximum amount of power that can be drawn.

A second needle, typically coloured red, shows the highest value that has been indicated since last being reset. This allows the maximum demand to be measured even if it occurs at a time when no-one is present.

In this case, the meter also includes a more typical moving iron meter, which reads on the second scale from the bottom to the right, with the pivot at the top left.

PS: This installation might have been a bit over-specified...

Not the answer you're looking for? Browse other questions tagged experimental-physics measurements or ask your own question.

0
measuring electromagnetic induction
1
Measuring Vibration
1
Accurate measurement of total lung capacity / vital capacity
2
How can a Lego version of a Kibble balance measure the Planck constant?
1
Physically measure the covariant and contravariant components of a vector?