Is the molecular term ${}^1\Sigma^-$ possible in a molecule?

The old question How to understand this symmetry in the wavefunctions of a diatomic molecule? explores how it is possible for a quantum state to have zero angular momentum about a given axis (giving it a term $\Sigma$) while using multi-electron effects to stay parity-odd with respect to reflections in planes that contain that axis.

One of the things that fall out of that analysis is that, if this is done using a two-electron system, then the orbital part of the state needs to be odd under exchange, which forces the spin part to be even and therefore forces the spin representation to be a triplet, making the full term symbol ${}^3\Sigma^-$.

My question here is: is it possible to use more than two electrons, coupled in some clever way, to whittle that spin representation down to a singlet, for a full term symbol of ${}^1\Sigma^-$? If so, what is an explicit example? What is the minimal number of electrons needed for such a term? Or are there other restrictions in place that make that term impossible no matter how you try?

From a chemistry perspective (so I am afraid this might not be as rigorous as you guys usually like, but it is what I can offer), we would usually use group theory to determine the term symbol for the molecule. tom has kindly provided the examples of dioxygen and dinitrogen. Since these molecules are centrosymmetric, the term symbol technically should include a gerade/ungerade label as well, i.e. $^1\Sigma_\mathrm g^-$ or $^1\Sigma_\mathrm u^-$, but it's not particularly important. 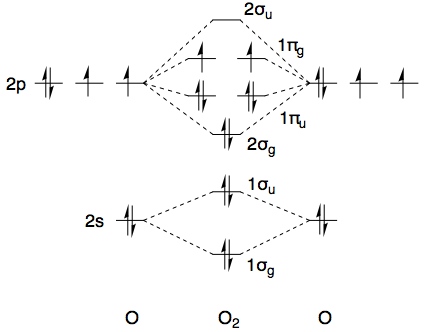 The first ten electrons are all paired up and collectively transform as the totally symmetric irreducible representation, i.e. $\Sigma_\mathrm g^+$, so from a symmetry point of view we only need to consider the top two electrons. Both electrons are in a $\pi_\mathrm g$ orbital, and collectively these transform as the direct product of $\Pi_\mathrm g$ with itself. (Irreducible representations are labelled with capital Greek letters, whereas small letters are used for MO symmetry labels.)

This means that a $(\pi_\mathrm g)^2$ configuration can have an overall symmetry of either of these three, depending on how the electrons are configured. Now, the square brackets come into play: these represent antisymmetrised direct products, i.e. spatial wavefunctions which are antisymmetric upon permutation of the two $\pi_\mathrm g$ electrons. In order to satisfy the Pauli exclusion principle, this must be paired with the symmetric spin wavefunction, i.e. a triplet spin function. Likewise, the symmetric spatial wavefunctions $\Sigma_\mathrm g^+$ and $\Delta_\mathrm g$ must be paired with the antisymmetric singlet spin function.

Why is this so? I actually don't know how to explain this intuitively, but I can demonstrate it with a concrete wavefunction. Let's label the two lower-energy $\pi_\mathrm g$ orbitals by $\psi_{a+}$ and $\psi_{a-}$, and the two higher-energy $\pi_\mathrm g$ orbitals by $\psi_{b+}$ and $\psi_{b-}$. The sign $\pm$ indicates the direction of the angular momentum projection along the internuclear axis: $\pi$-type orbitals come in pairs of $+1$ and $-1$ units of these angular momentum. Now consider the following wavefunction (I ignore normalisation).

The maths is easy, but fiddly. The effect of reflection in a plane causes the interchange of $+$ and $-$ labels, and you can verify that this turns $\Psi$ into $-\Psi$, i.e. the term symbol has a minus sign. The net projection of angular momentum onto the internuclear axis is zero, hence $\Sigma$. Lastly, the overall wavefunction is symmetric with respect to interchange of the two particles (interchange the labels 1 and 2). Consequently, it must be paired with the antisymmetric spatial spin function, which is the singlet wavefunction $\alpha(1)\beta(2) - \beta(1)\alpha(2)$. This is the $^1\Sigma_\mathrm g^-$ that you are looking for.

From a symmetry perspective, the $\pi$ orbitals with three electrons may be thought of as having one hole instead of three electrons. So, the allowed term symbols are simply given by

and again, since the holes are in different $\pi$-type orbitals, there is no need to account for the antisymmetrisation in square brackets. This is how you obtain the $^1\Sigma_\mathrm u^-$ state which is $33\,057~\mathrm{cm^{-1}}$ above the $^3\Sigma_\mathrm g^+$ ground state.

It is possible to have ${}^1\Sigma^-$ electronic states for diatomics.

I don't think it is that unusual as I found these data above on webbook.nist.gov by searching the `constants of diatomic molecules' section of two well known diatomic molecules, oxygen and nitrogen, and found each of them had excited states with this symmetry.

Is your question about ground states? If you accept excited states then these cases are explicit examples.

Sorry I don't know how the electons are distributed etc. in these molecules to generate these symmetries, but I hope this is a helpful contribution.

It may be necessary to have thee partially filled orbitals... molecular hydrogen did not have any states of this symmetry when I looked it up...

which means that if a molecule has two electrons in two different $\pi$ orbitals.. of the type

then we would expect to have electronic states with the symmetries $ \Sigma^+, \Sigma^-$ and $ \Delta $

but this does not address the issue of whether the states are singlet or triplet - I think the key thing is that two electrons / or hole and electron / are in different orbitals so that singlet and triplet electronic states with these symmetries can be made.

By contrast for molecular oxygen which has the electron structure

the ground state is $^3\Sigma^-$ and the first excited state with the same electron configuration is $^1\Delta$ and I am not sure, but I think the $^1\Sigma^-$ may just not be possible - the square brackets [] above come into play when electrons are in the same orbitals.

Not the answer you're looking for? Browse other questions tagged quantum-mechanics angular-momentum symmetry molecules or ask your own question.

3
How to understand the symmetry $\Sigma^-$ in the wavefunction of a diatomic molecule?
5
Atomic physics, determining levels and terms

4
Why is oxygen in a triplet state and what are the consequences?
3
Possible states for two electrons in the helium atom
2
Understanding Triplet And Singlet States
5
Understanding the Selection Rules of a Spin-Forbidden, Magnetic Dipole Transition in Molecular Oxygen
3
Pauli matrix for triplet state?
5
Intuitively, why is the energy decrease of the singlet state three times larger than the energy increase of the triplet state (hyperfine correction)?
0
Helium's first excited state (anti-symmetry of the spatial function)
0
How do electron holes have spin, and how do they interact with “real” particles / vice versa?
4
Parallel / antiparallel spins for two unpaired electrons