Finding the displacement of two interfering waves at a certain point

My query pertains to the following exercise: 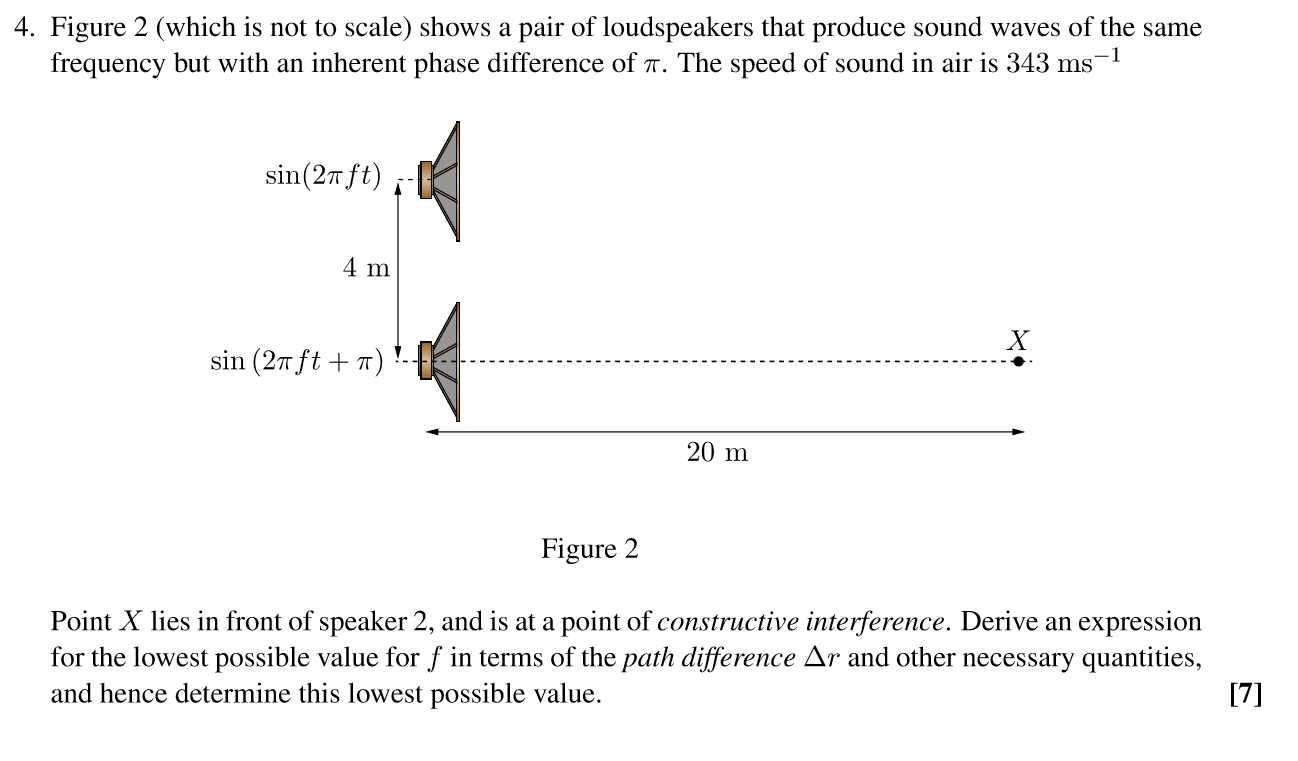 The way I understand the physics of this situation is the following:

The path difference is the difference of each megaphone's respective distance.. by definition, I would think.

The equation I've been taught to consider includes path difference and looks like it should be used in some way:

But this was derived from a different setup with this, where the speakers where both co-linear to the point we want to consider the displacement at.

Anyway, the problem I run in with this logic is this.

Which... goes to $0$ for all $t$. I clearly messed something up here. Not only have I not been able to incorporate path difference, but I generally botched this.

Does anyone have the right sense for this?

I've reattempted the problem again, and came up with an answer anyway. I've only got one value of $f$, rather than selecting a lowest possible one, so I'm not sure if it makes sense, but the answer seems reasonable.

Does this reasoning make sense?

I clearly messed something up here.

Perhaps you have relied too much on equations and neglected the Physics?

Your conclusion that $ s(t) = \sin(2\pi ft) + \sin(2\pi ft + \pi)=0$ is quite correct because it states that at a given position for all time when the phase difference between the two superposing waves is $\pi$ the resultant amplitude is zero - destructive interference.

Not only have I not been able to incorporate path difference, but I generally botched this.

Not true.
When you added the $\pi$ in your equation you have incorporated the information about the path difference.
If the two sources emit waves which are in phase you have said that when those waves arrive at the position that you are considering the waves are now $\pi$ out of phase because the waves from each of the sources have travkleed different distances.
You should now be able to equate that difference in phase to a difference in path length in terms of the wavelength of the waves.

where $k=\frac{2\pi}{\lambda},\, \omega = 2\pi f,\,r $ is the distance between one source and the position under consideration and $a$ is the extra distance travelled by the waves from the other source.

In the question you are being asked to make the cosine term zero and relate the path difference, $a$, to the geometry of the arrangement of sources that you are considering.

I don't think you need all the sines and cosines, rather, just count distance using phase mod $2\pi$--the natural unit being $\lambda$ mod $1$. Of course, you have to include the electronic phase difference $\pi$ being $\lambda/2$:

Solving for the smallest $\lambda$ gives you $f$.

0
What am I doing wrong finding the eigenvectors of this rotation matrix?
8
Resultant intensity of two waves
1
Why pressure standing waves have different nodes location with respect to the corresponding displacement waves?
4
Heating transient of a composite rod?
0
What is the amplitude and phase of this following equation?
1
Phase difference and optical path difference (OPD)