Physics of a skateboard ollie

Does anyone have a good explanation of the physics and vectors of force involved in the skateboarding trick the ollie (where the skater jumps and causes the skateboard to rise off the ground with him)?

A slow-motion video of an ollie makes the physics clear.

The main idea is that the skateboarder pushes down hard on one side out past the wheels, torquing the board up into a hop, then pushes down with the other foot to level the board out and make it appear to stick to the feet. The skateboarder never lifts the board - the only necessary upward force in the whole process is the normal force from the ground.

We begin by pushing down hard on the right-hand side of the skateboard, to the right of the wheels. This creates a large torque about the right wheel and makes the skateboard start to rotate up off the ground. The upward momentum is provided by a large normal force from the ground. Here is a picture at the first moment, when the skateboard has zero velocity. 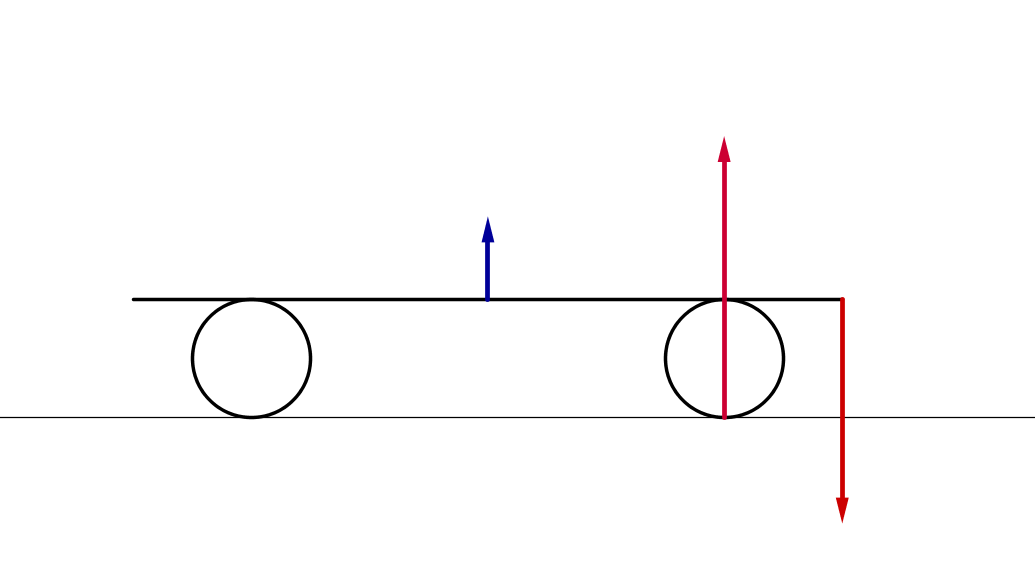 The red arrows show the forces. The blue arrow shows the acceleration of the center of mass. The torque about the right wheel is into your monitor.

The skateboard gains a significant amount of momentum upwards in this way. If we left it alone, it would fly up in the air, flipping, and moving to the right. Instead, we push down on it on the left hand side. This induces a counter torque and reduce's the skateboard's upwards momentum. Here is a picture before the skateboard leaves the ground, right when the force on the left wheel is first applied. 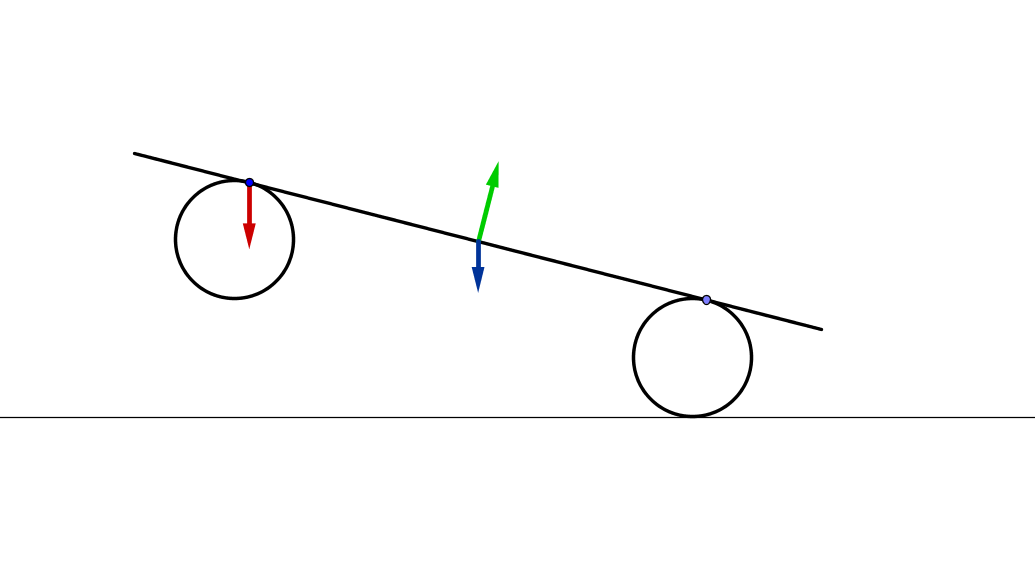 The red arrows are forces and the blue arrow is the acceleration again. The green arrow is the velocity of the center of mass. The torque is now in the opposite direction - out of the page. In the next moment, the skateboard's center of mass will continue to rise and move a little to the right, but also the skateboard will begin losing angular momentum. It will stop rotating, then rotate back to the flat position. In the mean time, its inertia will raise it off the ground.

Now both feet push on the board as we fall. Here is a picture of the board at its highest point, with the velocity again zero, and the feet pushing equally down. 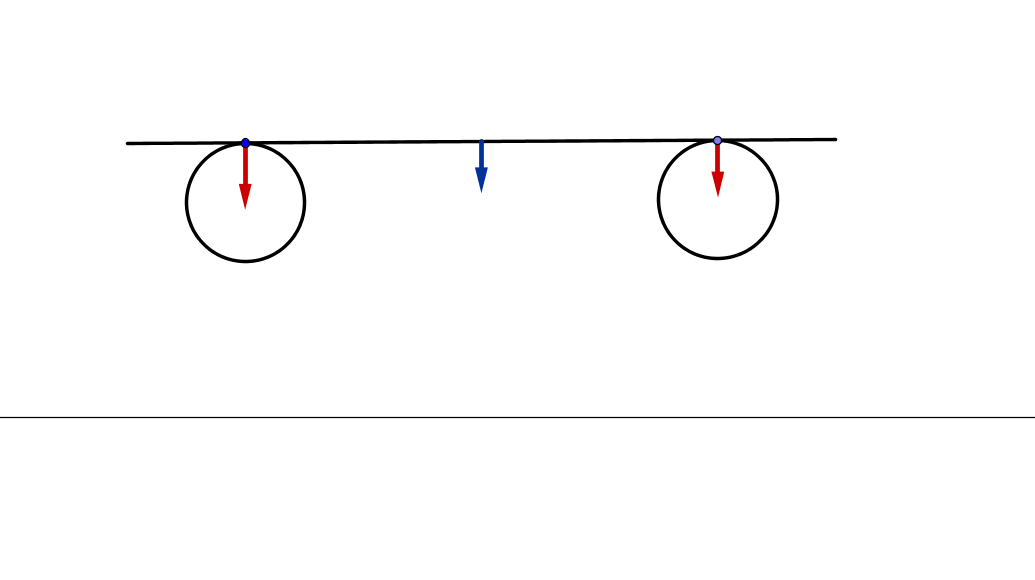 Some of these descriptions are not perfectly precise. For example, the skateboard does not need to be perfectly flat or have equal force on both sides right when it attains the greatest height in its trajectory. I omitted gravity (which is not really essential, except for the skateboarder). There may be some other small forces involved, etc.

Marks answer is flawed from the second picture onward.

The major force contributing to the lift of the board is not applied downward on the left axle but instead by pulling parallel to the boards surface (in an up and a litte to the left direction). This is done by the instep of the riders right foot (after rotating the foot around the ankle) as can barely be seen in the video. That is why there is grip tape on the deck in the first place (and why skater's shoes don't last long).

Without this (for a beginner rather difficult) motion the board wouldn't lift at all (this is only partly true as any skateboarder can tell you but for now let's assume it's correct).

If you only applied Mark's suggested downward force on the left axle you would not lift the board but press it right back down to the ground.

The overall height of the jump then is determined by how high you can jump yourself and how well you can pull the board up with you. There is no necessity in popping (the moment of tail-ground contact) more powerfully to gain height. It is perfectly possible to do an ollie without the tail hitting the ground at all.

It is quite difficult to see this from just watching the video or a full speed skateboarder, so I suggest you try it yourself (while wearing protection of course).

An important part I think is that the board acts as a spring. When the skater pushed down to leap up this stores energy in the board which is released to pop the board up right under the skater's feet.

My son does all of these things with great ease, and does fancy stuff on half pipes and the like. If I tried these things I suspect a month later I would get some hospital bills.

Not the answer you're looking for? Browse other questions tagged forces vectors everyday-life or ask your own question.

55
Principle of physics used in the lift of skateboard

3
Is it possible for the Normal Force to do work?
7
Why is friction force negative in ice skater problem?
0
Strange Equilibrium Forces in Bathroom Hand Dryer
0
Adding an additional fan to a fan powered sail according to Newton's 3rd Law?
0
How does forward motion affect downward impact forces?
54
Why do we use cross products in physics?
1
Forces on an oscillating skateboard