Could a powerful gravitational wave cause electrons to emit light?

I imagine electrons being accelerated by passing gravitational waves, say from a nearby kilonova, so I would expect the electrons to emit light. Am I right?

A gravitational wave does not exert a force on a point particle. By this I mean if you were that point particle and you were holding an accelerometer then you would measure no acceleration as the wave passed through you. More precisely your proper acceleration remains zero at all times.

This may seem a bit odd, but it happens because the gravitational wave changes the separation of objects by changing the geometry of the spacetime around them, not by exerting a force on the objects to move them.

The situation you describe is essentially the same as whether an electron falling in a gravitational field radiates. If you watch a freely falling electron then you see it accelerate so from your perspective it should radiate. However the freely falling electron is weightless, like all freely falling objects, and therefore experiences no acceleration. So from the electron's perspective it shouldn't radiate. This is a longstanding paradox and has been addressed several times on the site - the definitive question appears to be:

Having said this, I'm unsure to what extend the paradox has been satisfactorily resolved. I believe the solution is that it does radiate as observed from a stationary frame but does not radiate as observed from a comoving frame. The difference is because observers in different frames disagree about the QED ground state. This is the same argument as used for Unruh radiation. 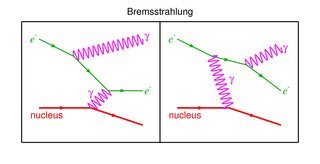 What one should keep in mind is that the gamma between the two vertices above is a virtual photon transferring energy from the electron which energy is radiated as a real photon. (braking action)

The place of the "nucleus" can be taken by any large collective electric field , radiating the virtual gamma to the electron.

Also a real photon scattering off an electron will allow for the radiation of a secondary photon, due to the acceleration acquired by the scatter ( ignoring the nucleus in the diagram above)

Thus yes, an electron can scatter with a graviton, virtual or not, get a dp/dt impulse, and emit a photon, within the feynman rules and the conservation laws of the standard model of particle physics, if one accepts quantization of gravity.

Short answer: yes, electron would radiate electromagnetic waves as a result of its interaction with gravitational wave.

While Feynman rules for the graviton do alert us to the fact that such process can occur we do not need quantum gravity (or quantum mechanics at all) to analyze this situation.

Physical electron (classically) is not just a point particle. It is a system of a point charge and electromagnetic field, both of these components interacting with gravitational field. If there are no external electromagnetic fields (and so the charge is the only source of it) one could try to integrate it out from equations of motion of the charge. When we do that we would see that electron in a curved space-time no longer moves along geodesics. Instead it experiences additional acceleration from what is called the DeWitt-Brehme radiation reaction force. Its interpretation is quite simple: it is a contribution from electromagnetic field of electron that is scattered off by a gravitational field and reconnects with it. And because the signal could only propagate with finite speed ($c$) this 'round trip' of the field means that the expression for the radiation reaction force has a non-local character: it depends on the past motion of electron.

One can also show that the net energy carried away by electromagnetic waves radiated as a result of such interaction is equal to minus the work done by the DeWitt-Brehme force. And so, as the gravitational wave passes through the electron it would radiate electromagnetic wave.

Final note: the frequency of such wave would be the same order of magnitude as the frequency of gravitational wave, so it would not be a 'light' but in a of 'long-wave' part of radio spectrum.

Not the answer you're looking for? Browse other questions tagged visible-light electrons gravitational-waves or ask your own question.