The reverse of this process happens in radioactive decay: a nucleus with some mass (and hence weight) decays to some number of products. The sum of the mass of those products is less than the original nucleus’s mass. The difference makes up the kinetic energy of the products.

Now imagine it in reverse: the total energy, including kinetic, makes up the final mass.

The energy of the system won't change. The energy of the particles alone might, so their relativistic mass might too. As was pointed out in a reply the particles might have emitted radiation that would balance out this difference in relativistic masses, though the emitted radiation would still be a part of the system, so the system's energy wont change. But if we say they didn't emit radiation we can still find places where the difference in mass was sunk in.

Finally something that might be worth mentioning is that two particles can not just stick together and stop moving. This implies that both their position and momentum are perfectly defined, which violates the Heisenberg's uncertainty principle.

In special relativity mass is not a conserved quantity. It uniquely defines quantum mechanical particles by the length of the four vector describing them called the rest mass, or the invariant mass, characterizing each particle, invariant under Lorentz transformations.

The term relativistic mass and its algebra has fallen by the way side , exactly because it causes confusions as the one in the question. It connects Newtonian inertial mass concepts with the relativistic energy concepts and is useful only when thinking of spaceships and the fuel they will need to reach relativistic energies.It is not used in particle physics.

Suppose the two particles you are assuming are elementary particles of the standard model of particle physics.They cannot "stick together" inelastially, because energy would not be conserved as you state in the question. The experiment has been done several times, in e+e- scattering, and there is no channel where at the center of mass a single entity forms/sticks together, except within the Heisenberg uncertainty principle, resonances as seen here: 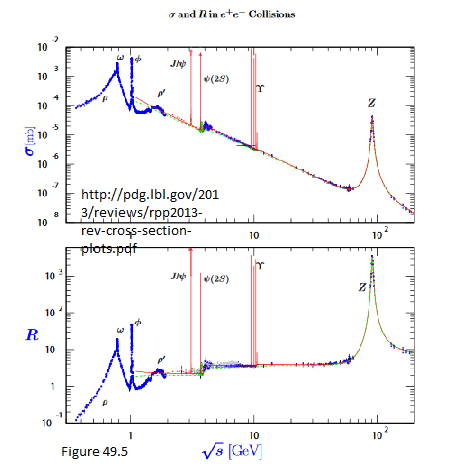 These are hadronic crossections, i.e. e+e- scattering into various hadrons.

Note the peaks as the energy of the beams increases, these are resonances, with the necessary mass for conservation of energy but decaying very fast into their constituent elementary particles, within the HUP. For a Δ(t) they make up a new massive entity , which has to decay into standard model particles because they are resonances. This is the experimental fact, and lorentz transormations describe it exactly.

Now in nuclear physics, if a stable state could be reached in the passing over the resonant part of the potential, it would be stable but not completely inelastic because there is no just "sticking" in quantum physics. There will be other particles taking away kinetic and binding energy ( the sticking part in quantum regime) as in this example of fusion in the sun. Proton proton fusion will always give a deuteron which has a mass lower than two protons, and thus at least a positron and an electron neutrino leave the interaction region balancing the energy budget. Note that also quantum numbers have to be conserved, hence the positron electron neutrino pair.

In general , in the quantum regime, stability ( sticking) depends on stable energy levels in nuclear matter otherwise it is just resonances within the HUP, and quantum number conservation has to be obeyed.

Not the answer you're looking for? Browse other questions tagged special-relativity mass collision mass-energy or ask your own question.