Just starting to learn basic concepts of electronics, and I'm a bit confused looking at this diagram. Previously, we've always had a wire connected to the negative end of the terminal, and that made sense as electrons flowing from negative to positive would re-enter the battery. In this case, how can current flow? Maybe I'm misunderstanding, but this doesn't seem like a closed circuit?

I feel like I'm also pretty shaky on ground, but if the only path for electrons is to ground, how can there be a voltage difference? Also, where does current flowing through the diode go? It can't go through the positive terminal of the battery?

Sorry for the dumb questions! 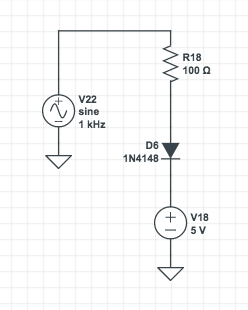 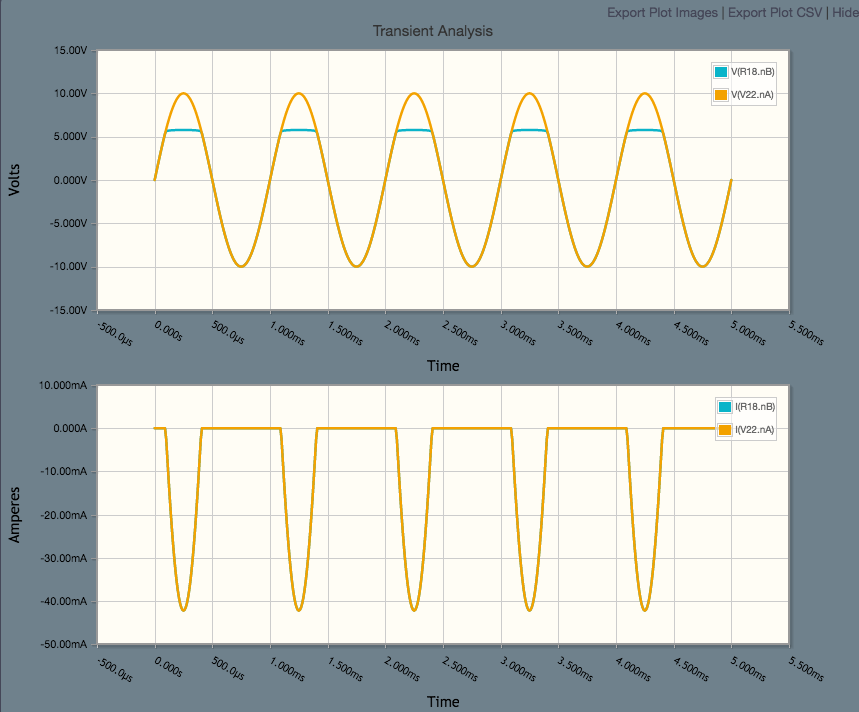 Just to follow on from the answer given by @JohnRennie.

Those unlabelled triangle in your diagram indicate that those nodes are at the same constant potential which is often chosen to be zero volt as in the case of your circuit diagram.

As far as your circuit diagram is concerned it is exactly the same as if you had connected the two triangles together with a line but there is extra information in that looking at the CRO traces those triangles are assumed to be at a potential of $0\,\rm volt$ and other potentials are measured relative to those unlabelled triangle nodes.

The use of such a symbol reduces the complexity of a circuit diagram as the one below for a Precision Stereo Headphone Amplifier. 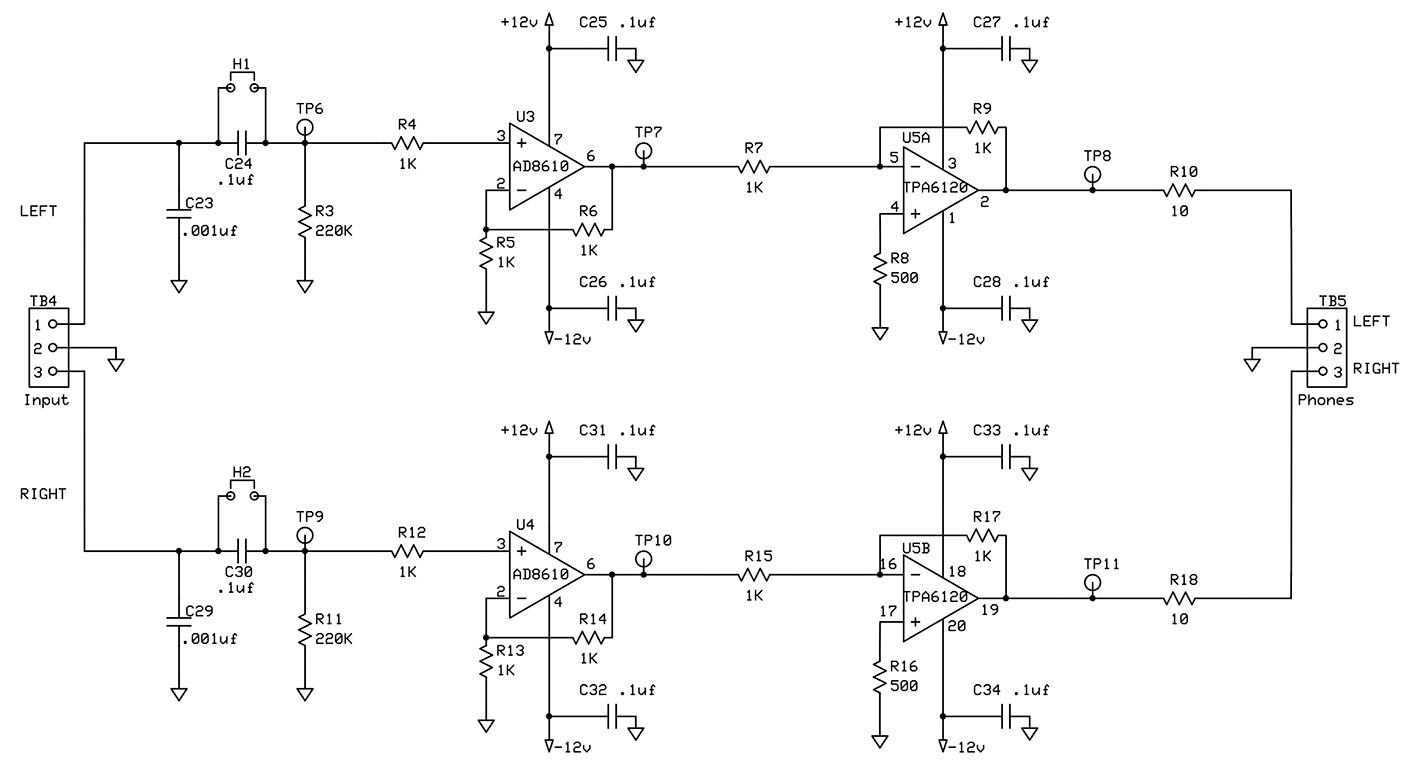 The symbol ┴ (inverted T) is sometimes used to designate zero volts but with a label also a stated fixed potential as shown in this diagram with an upright T. 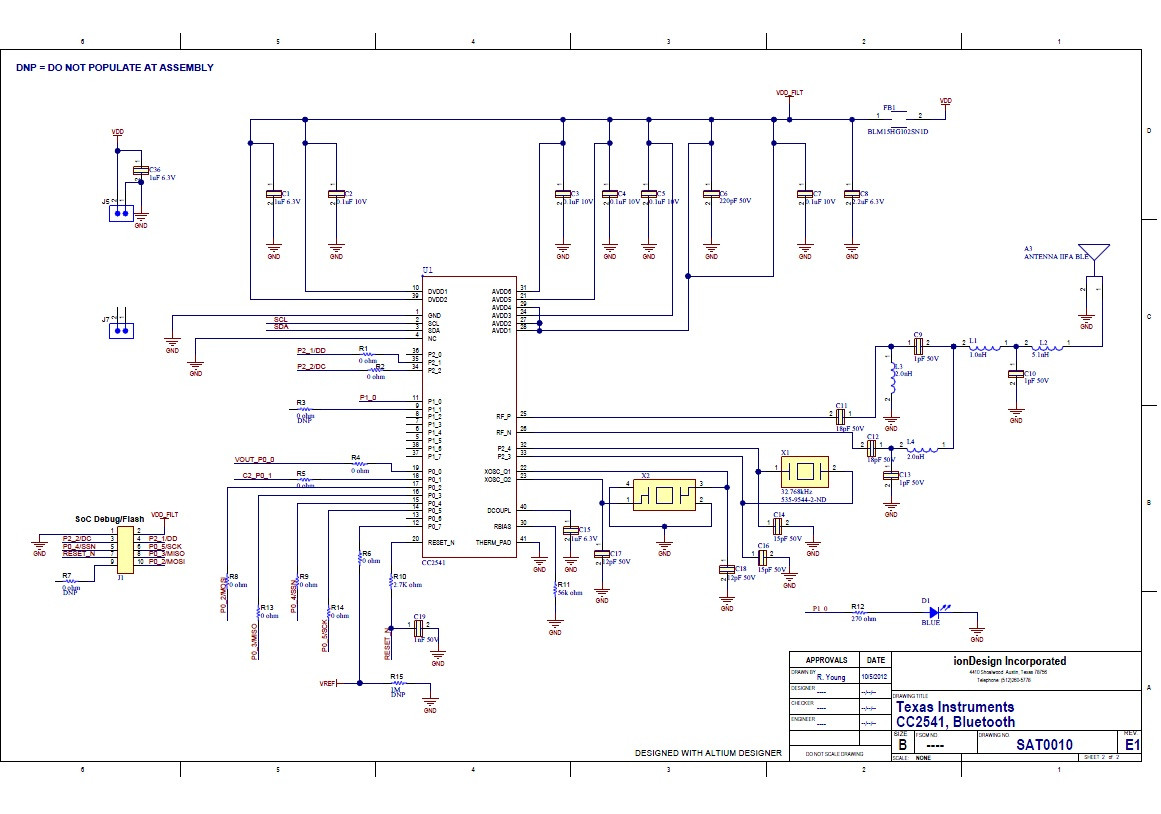 In this diagram there is the familiar earth/ground (GND) symbol which I cannot reproduce as a text symbol and that is taken as being at a potential of zero volts.

The ground is effectively a current sink or source of infinite capacity so anything at a greater or lower potential than ground will flow current to or from the ground.

In this particular case the current flowing through V22 and V18 has to be the same because they're connected together by the top wire, so just treat the problem as if it was a closed circuit.

Not the answer you're looking for? Browse other questions tagged electric-circuits electrical-resistance semiconductor-physics voltage electrical-engineering or ask your own question.

4
How does current flow from the emitter, through the base and to the collector in a NPN transistor?
5
Voltage in a circuit?
2
The Difference Between voltage and current
1
Need help understanding a simple circuit in-depth
0
Experiment for finding resistivity
0
Why does current have to flow in the same direction?
3
How the current moves in the battery and outside the battery?
0
Why is current slowed down by resistance?
2
Energy and Speed of Electrons in a Circuit
7
Does an electric current flow in an open circuit?