How do U-tube manometers function in the framework of special relativity?

A very simple thought experiment has crossed my mind for which I cannot find a clear solution. Two U-tube manometers filled with oil ($\rho_0$) are located in a uniform gravitational field $g_0$. A solid sphere with mass $m_0$ is located on a mass-less piston with a base area of $A_0$ (See below figure-Left.), and another solid sphere with the same mass $m_0$ is located an arbitrary altitude away from the ground on a platform where is connected with a simple apparatus made of some fixed cogwheels and moving gearbars which are all mass-less. (See below figure-Right.) This apparatus changes the horizontal direction of the force – exerted by the column of the oil – into vertical without altering its magnitude. The vertical gearbar tends to push the mass $m_0$ upward. From the viewpoint of the observer at rest with respect to the manometers, the height of the oil for which the manometers are kept at equilibrium, is calculated to be: 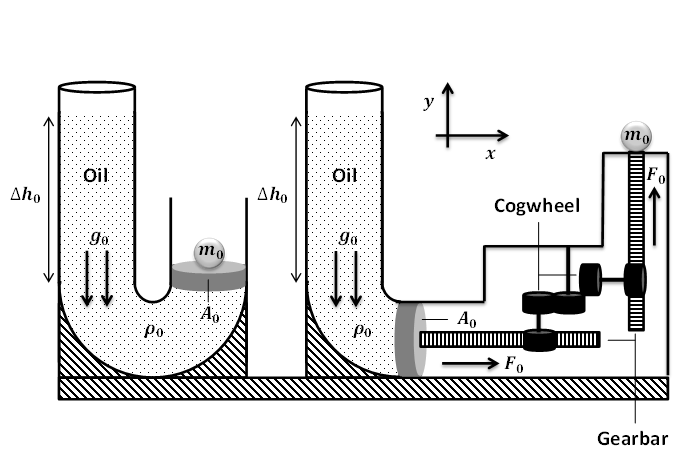 Now consider the scenario from the viewpoint of an inertial observer who moves with a velocity $v$ in the $x$-direction towards the manometers. He believes that the lengths in the $y$-direction shall remain unchanged, and thus he anticipate that ${\Delta h}$, from his standpoint, must be equal to ${\Delta h_0}$. For the left manometer, he calculates:

Recall that the moving observer can also use the transverse mass $m=\gamma m_0$ to recalculate a correct result for the height of the oil in the left manometer. In this case, he should use ${\rho=\gamma^2 \rho_0}$ due to the oil transverse mass increase:

These are correct results. Nonetheless, how do the calculations go for the right manometer from the viewpoint of the moving observer with respect to the fact that $A$ is no longer Lorentz contracted ($A=A_0$)?

(Note that Einstein, Plank, Eddington, Balnusa, Ott and Landsberg were all in agreement with the fact that pressure is an invariant!)

You have to consider time dilation for the gears. Let's make this more clear. From the perspective of the observer at rest, there is a torque which makes the gears rotate. Although force makes things a bit complicated, this observer can find the rotation period of the gears. The period should be derived from the angular momentum and torque equation.

If you were to give boundary conditions like whether the period will be constant or not and other things, this question could be solved more easily. At any rate, the difference between these two frame is a $\gamma$ in the denominator. By considering the fact that the non-rest frame will see more torque (because the oil density is multiplied by $\gamma^2$, for example) and at the same time that, because of time dilation, the gear frequency is being decreased, these two effects will neutralize each other and as a result $\Delta h$ will be invariant for both observers.

When the horizontal toothed bar is contracted to half of its rest length, it moves half the amount that the vertical toothed bar moves.

When the motion is halved, then the force is doubled. It's like a lever.

Not the answer you're looking for? Browse other questions tagged special-relativity mass pressure fluid-statics or ask your own question.

2
Lorentz transformation matrix and its meaning in Minkowski diagram
1
Special Relativity Time Dilation Misconception
0
How to determine which object in a special relativity physics problem has proper time?
2
Motion of uniform accelerating rocket in special relativity
0
Duration of an accelerated movement in special relativity
1
Peskin and Schroeder Section 7.1 Mass Shift
0
Does a time-varying magnetic field ALWAYS produce an electric field?
0
Conceptual question regarding special relativity
2
What is the relativistic form of the dynamic pressure of a fluid? Is it a Lorentz-invariant quantity?