What is the difference between tangent space and configuration space?

I am doing Lagrangian mechanics and working with Noether's theorem. Please, could you explain the difference between the configuration space and the tangent space?

Now think about $K$ particles free of constraints. A certain configuration of this system is built by bringing together all positions of all $K$ particles. This obviously contains the informations of relative positions as well and how the system "looks like". Mathematically the set of all configurations is now

Obviously now imposing constraints as in the case above will restrict the possible configurations to a subset of $\mathbb{R}^{3K}$.

Now we would like to describe the configurations by using coordinates. These coordinates need not be the coordinates labeling points in space, but must be coordinates which are adapted to the problem in question.

And when analyzing problem sometimes there are certain quantities which obviously encode in the simpler possible manner possible, whereas other coordinates seems awkward.

where $(x^i,y^i,z^i)$ are the coordinates in space of the $i$-th particle. You might say: but you already said that when you said that the set of possible configurations is $\mathbb{R}^{3K}$, but bear with me, the fact that $\mathbb{R}^{3K}$ is already the set of all collections of $K$ three tuples of cartesian coordinates is just one special situation, and in general it is nice to make a clear distinction between the space and the coordinates laid on it.

Now for the problem of the particle constrained to move on the sphere, it is obviously better to take a set of coordinates adapted to the sphere, like angular coordinates $(\theta,\phi)$. One thing we obviously expect is that these coordinates are assigned smoothly to configurations.

The fact that we need a set of configurations, on which we can put coordinates smoothly and on which we can talk about smooth curves suggests we need the structure of a smooth manifold. Thus

The configuration space of a classical system is a smooth manifold $Q$ whose points represent the possible configurations of the system. We usually take $Q$ to be such that the constraints that may exist are already imposed on its definition. For the particle restricted to the sphere $Q=S^2$.

Now given a smooth manifold $Q$, for every $a\in Q$ we can talk about a vector space $T_a Q$ called tangent space to $Q$ at $a$ which contains *all possible directions on $Q$ that can be followed when at point $a$. So if the system is on the configuration $a\in Q$ an element $v\in T_a Q$ represents a possible direction on which the system could evolve. This is called a infinitesimal virtual displacement. We can also think of this $v$ as a possible velocity with which the configuration could be changing with.

We can then bring together all these spaces in a coherent way. We define

And indeed, as shown by Michael Spivak in the book "Physics for Mathematicians" working with infinitesimal virtual displacements one can derive the Euler-Lagrange equations, which shows how $L = T - V$ appears naturally.

The wording of your question suggests a misconception or two.

If you'd like to visualize it, you can imagine that $T_pQ$ is the set of vectors which live in the tangent plane to $Q$ at the point $p$: 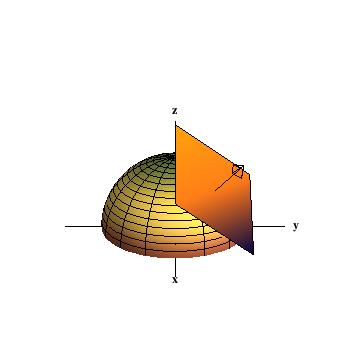 From here, it's useful to consider the tangent bundle $TQ$, which is simply the disjoint union of all of the $T_pQ$'s. Roughly speaking, an element $v\in TQ$ is a vector which "knows where it lives" - that is, there is a natural projection $\pi : TQ \rightarrow Q$ which maps a vector in $TQ$ to the point of $Q$ where its tangent space is attached.

Now that that's cleared up, it seems like you're asking about the distinction between $Q$ and some tangent space $T_pQ$.

The most immediate difference which comes to my mind is that $T_pQ$ is a vector space while $Q$ typically is not. If $Q=\mathbb{R}^n$, then it's possible to define "position vectors" and add them together component-wise. On the other hand, maybe $Q=S^2$ (this arises for the spherical pendulum) - in this case, what does it mean to add two points on a sphere?

It is true that $Q$ and $T_pQ$ are homeomorphic in a neighborhood of $p$ - this is due to the definition of a manifold. However, the two spaces generically have different structure. $T_pQ$ is a vector space which is isomorphic to $\mathbb{R}^d$; $Q$ is generically not a vector space and may have a wildly different global topology.

Not the answer you're looking for? Browse other questions tagged classical-mechanics differential-geometry vectors definition or ask your own question.