Why doesn't the brightness of a bulb change with time?

Household bulbs get alternating current, which means that the voltage of source and current in circuit keep changing with time, which implies that the power supply isn't constant. However, we don't see any changes in brightness of the bulb. Why is that ?

You can see the AC flicker in slow motion videos if the camera has a sufficient frame rate, for instance this one.

We already have great answers, but I'll add an anecdote to this:

I once played around with several light sources and a scientific camera. The overall experiment was not overly scientific, and I only had one example of each light source, but it may serve as a starting point.

As an addition to chris' answer

the intensity does change, but it changes very quickly and not by that much

The change is enough to be measurable, and in some ways, it can be really handy.

In the days of the gramophone (the large black discs that were used to play music before the CD), some record players could be fine-tuned to turn at the correct speed, and could be switched to turn at 33 or 45 rpm. In order to finely adjust the speed, the base of the turntable had a pattern on it which would appear to stand still when the table turned at the right speed. Often there were 4 patterns, one for 33 and 45 rpm for 50Hz and 60Hz electricity nets each.

This youtube shoes how this works using the little light next to the turntable, but the patterns where originally made to be used with normal incandescent bulbs - and it worked.

Update. To sum up good comments to my answer.

A very well formulated answer by @Chris and some real world numbers by @NightLightFighter cover the physics of the question very well. Here are some different aspects of it.

When the power is at minimum, the filament cools down mainly by radiation (thermal conductivity of the filament is not too good and convection is not very effective especially because of the protective glass cover). The characteristic time of this cooling is significantly slower compared to the period of the electric power, so the change of the filament temperature is not too high and causes only small change in the radiation intensity. According to @NightLightFighter it is only

A fluorescent tube has a variation of about 40% of its total brightness.

Human vision is a complex system and not everything is understood about it yet. However, capabilities of our vision are well studied and the actual answer to the question is that they are not good enough to see the light flicker of the light bulb (in most cases). In this study published in Nature, Scientific Reports, 2013, it was found that humans can detect some changes in the displayed picture on a monitor which are spatially uniform with threshold of the modulation of about 63 Hz. And for images with some sharp spatial edges even up to 500 Hz!

I assume it is safe to think of the incandescent bulb as of a ‘spatially uniform’ image. Speculations are that the changes in the light intensity are much smaller compared to the average value and they happen at a rate of ~ 100-120 Hz, which is higher than our capabilities, according to the cited research.

In case of the fluorescent tube, the changes in the light intensity are significantly bigger and one can assume that this case is closer to images with ‘spatial edge’ from the research. Therefore, the detection threshold could be higher. This may be the reason why some people can have headaches with such lighting. 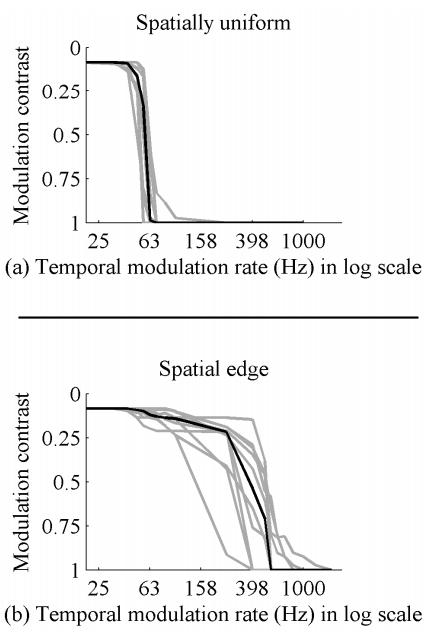 This is more of a biology question than a physics one. Light bulbs do flicker, we just can't detect it. The human visual system requires a certain amount of time to "refresh"; changes in intensity within that time period are averaged out. For instance, at high speeds fan blades will appear to become partially transparent, and objects behind them will simply become slightly less distinct, rather than flickering.

As an example, there’s this thing called Bloch's law. “Basically, it’s one of the few laws in perception,” Professor Thomas Busey, associate department chair at Indiana University’s Department of Psychological and Brain Sciences, tells me. It says that there’s a trade-off between intensity and duration in a flash of light lasting less than 100ms. You can have a nanosecond of incredibly bright light and it will appear the same as a tenth of a second of dim light. “In general, people can’t distinguish between short, bright and long, dim stimuli within a tenth of a second duration,” he says. It’s a little like the relationship between shutter-speed and aperture in a camera: by letting lots of light in with a wide aperture and setting a short shutter-speed your photograph will be equally well-exposed as one taken by letting a small amount of light with a narrow aperture and setting a long shutter-speed.

Note that 100 milliseconds = 1/10 second = 10 hertz. Standard AC in the US is 60 Hz for the voltage, which means that it's 120 Hz for the power (power is proportional to voltage squared, and so cycles at twice the rate). That means that a lightbulb will flicker at 12 times the threshold rate. "Normal" frame rates for video ranges from 20 to 30 Hz (although high-end systems can have higher frame rates), yet you probably don't notice any flicker when watching movies.

2
Electrical flow in a simple parallel circuit
4
What does it mean when we say that power of a bulb is 10 W? Since $V/I=$ resistance is a constant, how can power $=VI$ be a constant?
3
Bulbs glow with different brightness in one arrangement and the same brightness in the other arrangement
0
Does the brightness/power of each individual bulb change when you add more bulbs in a parallel circuit?
4
Among current and voltage which is responsible for brightness of a bulb?
2
How to determine which bulb will be the brightest in the series and parallel connection?
0
Change in voltage across an inductor bulb gets brighter
1
Why is the brightness of a light bulb dependant on power?