Why is the proton anti-proton annihilation and pair production asymmetric?

This is a follow up question to this question.

The process of annihilation is very well explained. However while the annihilation is a step-by-step process the pair production does not seem to follow this but happens in one step as mentioned here.

How is this asymmetry explained?

There is not a simple description of what happens during annihilation in terms of point particles. When interactions are relatively strong, as in annihilation, we do not know what the particle states of the quantum field are. Particles are only well defined objects in the limit of infinitely weak interactions, when they are described by Fock states. The particles present, and even the number of particles present, are not defined during the interaction itself.

Do you mean this first sentence in the link:

Pair production is the creation of an elementary particle and its antiparticle from a neutral boson. Examples include creating an electron and a positron, a muon and an antimuon, or a proton and an antiproton.

It is a confusing statement since it does not stress in that first sentence,that these neutral bosons need an energy input, which is extra steps. It does say it further on. One should not stick to first sentences in a physics article.

These neutral bosons that carry energy and zero charge and quantum numbers, are the gamma $γ$, gluon $g$ , the zed $Z$, gauge bosons of the electromagnetic, strong, and weak interactions. The $g$ and the $Z$ can only exist within a diagram, as off mass shell virtual particles, there is a step of input interaction input interactions, as

The photons also exist as real particles due to the long range nature of electromagnetism, but even so, a photon cannot generate a particle antiparticle pair in a vacuum, without extra interactions, because energy and momentum would be violated: the created pair has at least the mass of two electrons, whereas the photon has zero mass . The real photon has to interact with the fields of a nucleus in order to generate an e+e- pair, as the article you quote states: 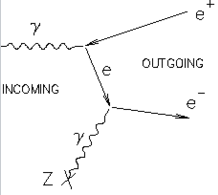 No unstable state in particle physics is really a one step process. Pions and kaons and muons live long enough to be able to ignore their creation state and their decay may be considered a one step process, but not gluons and zeds into particle pairs. Also the need of conservation of energy and momentum adds further steps when necessary.

Not the answer you're looking for? Browse other questions tagged standard-model antimatter protons time-reversal-symmetry pair-production or ask your own question.

0
Why is the sum of quarks in proton anti-proton annihilation different in the produced mesons?