Why do two coherent sounds add up $+6db$?

I read that two incoherent sounds add up $+3db$, and two coherent $+6db$. Tell me how does this not break law of conservation of energy.

Please note,two speakers using pistonic motion of fixed size surface ( all normal speakers ) to create sound do add up +6db if they are closer together than 1/2 of wavelenght,that is becose the effective radiation surface doubles,so efficieny doubles,there is effect called mutual coupling.

Two times efficiency + two times power does indeed result in +6db,but as far as I am aware,this doesnt work when sound sources are more than 1 wavelenght away and nowhere did it mentioned that coherent sounds add up +6db only when sound sources are close together,it seemed to be written as if its universal law that exist no matter the position of sound source.

You have several good points, especially this one:

[3 dB incoherent addition] seems to be written as a universal law that exists no matter the position of the sound source.

It's definitely not a universal law. Only a 'rule-of-thumb'. But it's a rule of thumb that has a solid basis when we consider how most sound measurements are made.

Here's an intuitive picture of why the rule of thumb exists.

If we have two speakers producing the exact same signal over time we'd have a standing, invariant pattern of constructive and deconstructive interference: 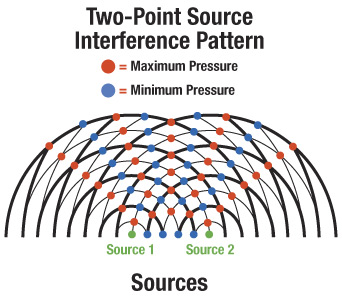 If the two signals are not in phase then the interference pattern shifts and moves with time. Convince yourself of this before moving on. If it helps, imagine the diagram above but on one side the heavy circles are at the positions of the light circles. How would the diagram look different?

I made a quick animation that shows two 4 Hz waves of exactly the same amplitude slowly going in-and-out of phase with each other. The green waveform is what you'd sample in one second's time if you had a microphone at that point in the sound field and the red and blue signals had their current phase relationship:

Or, in other words, due to phasing interference, the time-averaged measurement for two incoherent (out-of-phase) sources is three decibels less than that expected for coherent (perfectly in-phase) sources.

How well this rule-of-thumb works will depend on how your speakers are placed, but for the diagram above, it will work quite well for the central area between the two speakers.

It is important to specify the type of decibels. For example a speaker producing 100 Watts of power might be said to be producing 20 dBW or 50 dBm (referenced to 1 W and 1 mW respectively).

In audio you sometimes use dBspl, referenced to a sound pressure level of 20 microPascals. dBspl can be converted to W/m2. Multiply by the area of your eardrum to get the amount of power that you actually 'hear'.

Example: A speaker produces 10 Watts of audio power (10 dBW = 40 dBm). It spreads out and hits the (perfectly-absorbing, spherical) wall of your listening chamber where the sound level is e.g. 100 dBspl, and the amount of power absorbed by the wall is (multiplying the area of the walls in m2 by the power in W/m2 that you calculate from the dBspl) the same 10 Watts.

Now have 2 coherent speakers each producing 10 Watts (20 Watts total: 13 dBW). At the wall there will be places that have up to 106 dBspl of sound, and other places that are dead quiet. If you add up all the power absorbed by all the square meters of wall, the loud regions absorb more power and the quiet regions absorb less, but the total will turn out to be 20 Watts.

Having a Power Gain Gp,

About acoustics, always two identical signals summing in perfect conditions (never happens) will increase on 6dB. For this both of signals must have same phase, and this is called coherent. Incoherent is when nobody knows the relative phase on each signal, so can sum energy from 6dB (same phase) or the opposite effect, can produce a total cancellation (when phases have 180 degree difference)... All the possibilities between can happen. So why Incoherence is 3dB? Is an average adopted for some circumstances like in a stadium a lot of people Clapp and is impossible control the phase. We assume one clap maybe is 90dB two claps 93dB I hope this clarifies this question a little bit

I'd like to try and add to this. I think there is a misconception here surrounding the physical properties of intensity and pressure.

In your first question, you discuss adding Watts together, which results in a 3 dB increase to the overall sound power. Power is the amount of work done over time (expressed as the Watt) and intensity is that Power over some unit area (W/m^2).

In your next portion you discuss the synchronous movement of piston-driven speakers that produce a sound pressure wave. Pressure is a Force over some unit area. With sound, we usually measure with uPa (micropascals) or Pa (Pascals).

So when you are comparing between these, you will note that a doubling of intensity (when converted into a dB measurement) derives a dBintensity = 10 * log10 (I1/I0) equation - where I1 is an incident intensity and I0 is a reference intensity. If you double the intensity of some reference (I0), your ratio is 2:1, dBintensity = 10 * log10 (2) = ~3 dB. When you convert this to a pressure value - you must remember that I is proportional to P^2, which alters the equation: dBpressure = 10 * log10 (P1^2/P0^2) - where P1 is some incident pressure, compared to some reference pressure. If we work this example a little more, you can see that the equation simplifies to:

I hope this is helpful.

Not the answer you're looking for? Browse other questions tagged waves energy-conservation acoustics interference superposition or ask your own question.

0
Why do we add intensities for coherent sound sources?
2
Sound wave coherent time
0
Why aren't sounds ever distored
3
Speaker energy mystery
2
Two Point Source Interference: Why No Interference Occurs When Source Separation is Shorter than Wavelength?
2
Adding sound powers together