Why is a black body visible?

There are some misconceptions here :

So far so good.

It doesn't reflect or transmit energy.

No. Any object that did that would get hotter and hotter as it absorbed more and more energy and just retained it. A blackbody, like any object, will radiate energy away as photons - light at many different wavelengths.

In respect of light energy, it also absorbs all light and doesn't reflect any light ray.

Even when it absorbs it still radiates some energy, and it simply radiates less than it absorbs.

But when you talk about being "visible" in a human sense, this is a different thing. If you walk into a room with every object and surface emitting light you can see, and then I pop something into it that actually did not emit light at a visible wavelength you would still detect that visually - it would seem like a "hole" in the scene - a silhouette.

One must know the definition of a black body and its radiation:

Black, like white, is not a frequency in the electromagnetic spectrum. white is a combination of the frequencies of the spectrum that the retina decides as "white ", and black is the absence of detecting anything in the visible. It is called color perception.

Your example of platinum is interesting, because I am sure you are seeing it with light reflected from it , even if reflection is only 2% as you say, does it look black? 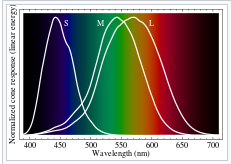 Normalized response spectra of human cones, to monochromatic spectral stimuli, with wavelength given in nanometers.

Our eyes see the frequencies within the visible spectrum, the other frequencies register as black, if they exist. At night an infrared camera sees, our eyes see black.

Outside equilibrium, if the emission has parts in the visible, our eyes and brain will see it as visible we will see the visible part of its black body radiation, as with the sun, or red hot iron at the blacksmith.

A black body absorbs all electro-magnetic energy it receives and does indeed emit radiation to stay in thermal equilibrium. If it is very hot, it will be visible. As you say, a black body does not reflect energy: It absorbs and emits.

You are combining several different issues into one question.

A black body absorbs all energy. It doesn't reflect or transmit energy.

You are treating "reflecting" and "transmitting" as the same. They are not. A perfect black body does not reflect any light, but it does transmit light, in the sense that it radiates light (that is, it glows from the heat of the energy it absorbs).

For instance, burnt platinum is 98-99% black body and yet is visible.

And here you are conflating several further ideas. A perfect black body is 100% black, not 99%. The concept is more a theoretical construct for thinking through thermodynamic processes than an actual phenomenon that one encounters in everyday life. The human eye can detect objects at something like a millionth of the intensity of sunlight. So even something that is 99% black will, in direct sunlight, be reflecting enough light for it to be visible. Now, if there are other objects, they will be reflecting even more light, drowning out the light from a "black" object, but then the black object will be detectable by noting that there is a region of space with less light.

Another issue you seem a bit unclear on is that the term "black body" is generally used in the context of objects interacting through radiation. If you put a block of platinum on a table, the amount of heat exchange between the platinum and the table due to conduction will be orders of magnitude larger than the amount of heat that they are exchanging through radiation. Thus, standard black body analysis does not apply to that situation.

Different visible wave lengths make sense of different colors in our brain.If there are no visible wavelengths, it makes sense of black. In respect of black body, it doesn’t reflect any visible elecro-magnetic wave as you mention.So it’s black and visible

0
Why do black bodies in thermal equilibrium with their surroundings only emit in non-visible regions of the electromagnetic spectrum?
1
Under what conditions can a body can be approximated as a black body?

10
Is a black hole a perfect black body?
2
Clear vs black in terms of light reflection?
3
visible light spectrum
8
Is it better to wear black clothes in the summer?
6
Black Bodies and appearing black
5
Why are light bulbs black body radiation emitters?
0
Why do black bodies in thermal equilibrium with their surroundings only emit in non-visible regions of the electromagnetic spectrum?
4
Black body radiation and why do we see different colors?
0
Black-body radiation and visible spectrum of stars