Where on Earth can you find plasma?

Ok, so not that 'where on earth', like literally - 'Where on Earth'.

Where on Earth, can you find matter in the 4th state, i.e. the plasma state?

Plasmas are a common part of the world we live in. The definition of plasma allows them to exist within an environment consisting mostly of bound atoms.

A variety of human technology creates plasmas. The type I hear plasma researchers reference most is a simple RF Plasma. This is perhaps the most direct way to use electricity to shake off the electrons from their atoms within a confined volume by using fast oscillating electromagnetic fields.

Nature also creates plasma. An Aurora is certainly included. Many less "exotic" plasma states are much more common. A fire has a low population of the ionized species, but is still a plasma. From the Wikipedia plasma article: 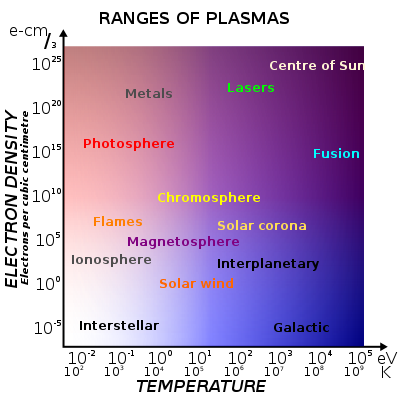 See Wikipedia for a list of available plasmas over there..! Or have a look below for the chart which shows variation of temperature and electron density in different plasmas..! 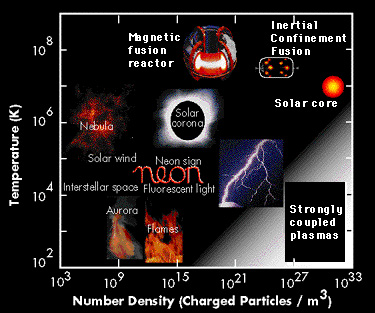 A quick Googling would've provided the answer. Common examples include

Lightning, Arcing (Between electrodes or in high voltage power line), The every CFL lamp that you see around, Plasma TV, Halogen Lightning. Aurora, and I am sure i am missing few others.

Best example of plasma on earth is lightning. It's, natural. plasma exists at high temperatures. Those temperatures don't usually exist here. But, they do for a brief second in a bolt of lightning

Electric is a type of plasma.Lightning is electric.Lamps and bulbs are lighten up by electric.All are plasmas

Not the answer you're looking for? Browse other questions tagged earth plasma-physics states-of-matter or ask your own question.

4
What velocity must an aircraft achieve for its shock wave to transform to plasma?

4
Can Plasma Ignite?
2
Plasma and Plasma Globes
6
Is a plasma a distinct phase of matter?
4
Why is lightning considered a plasma?
8
Can plasma turn back into gas, solid, or liquid?
1
Inert Gases in Plasma Balls
0
Artificial Plasma Creation
1
A question about the properties of plasma and its potential use in recycling
0
What is quark-gluon plasma?