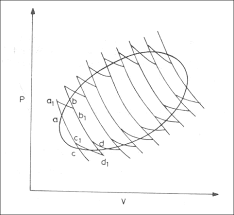 This is basically the application of the Clausius inequality to an irreversible cycle. The zero on the right hand side of the equation represents the change in entropy of the working fluid over the cycle, which is equal to zero (since the initial and final states around a complete cycle are the same). On the left-hand side, the $T_i$ represents the temperature at the interface between the working fluid and its surroundings, at which the heat transfer $Q_i$ is occurring. The proper statement of the Clausius inequality always requires you to use the temperature at the interface where the heat transfer is occurring.

So, where does Clausius inequality come from?

Consider an entropy balance on an engine interacting with $n$ reservoirs:

And also, in this case, what do T δQ represent?

I assume you mean $\frac{\delta Q}{T}$ ? It is the entropy transfer into the system/engine.

You are right that in general, system's state is so non-equilibrium that it has no thermodynamic state variables, so $pV$ diagram or similar representation of the cycle cannot be drawn. For example, fluid in which vortices appear is obviously not fully described just by two values $p,V$.

However, the Clausius inequality still makes sense even for cycles that carry system out to such non-equilibrium states. The symbol $T$ in Clausius' inequality refers to a temperature, which has to be defined for every stage of the process. Since the system studied may not have single temperature during a non-reversible process, it isn't system's temperature, but it is actually the temperature of the heat reservoir external to the system that is in thermal contact with it.

This reservoir is assumed to be always in equilibrium state, so its temperature is defined at all stages of the cyclic process. $\delta Q$ is just element of heat accepted by the system from the reservoir during infinitesimal change of system's state along the cyclic process.

I don't know how to prove the general form of the Clausius theorem where $T$ changes arbitrarily during the cycle.

The method that you mention - introducing fake Carnot cycles whose outline approximates the actual sequence of states - works trivially only for systems whose state is given by two quantities such as $p,V$; then, isotherms and adiabats are sufficient to arrive at any desired point close to the actual path and the difference in integrals can be shown to converge to zero. Mathematically, the straight path can be replaced by jagged path because the integral in 2D space does not depend on the path, only on endpoints ($dQ/T$ turns out to be integrable and thus defines a function of state $S$, called entropy).

But for more than two-variable systems, as far as I know there is no reason in general to believe that by using only isotherms and adiabats we can approximate the original path and have the difference in integrals go to zero. So, the method of fake Carnot cycles lacks crucial ingredient to work. However, it is widely believed that the relation $dQ = TdS$ is valid even in this multi-dimensional case, so again the integral does not depend on path, only on endpoints and entropy can be defined. It is often stated that this is a result of general statement of 2nd law of thermodynamics. However, it is a great extrapolation of experience with simple systems; it is hard to directly verify it for all multidimensional systems.

If we accept existence of entropy for general systems, then the Clausius inequality can be derived under some restricting assumptions. If the system is close to equilibrium at all stages of the cycle so that it has temperature $T_S$ and entropy and $dS=dQ/T_S$, then the fact that change of its entropy during the cycle must be zero can be written this way:

If the system is to accept heat and later dump waste heat into reservoir, its temperature $T_S$ has to differ from temperature of the reservoir $T_R$ in such a way that

Integrating both sides we obtain

I stress again that this relies on the assumption that system is close to equilibrium at all stages so it has well defined temperature, and that it has entropy for which $dS = dQ/T$.

Not the answer you're looking for? Browse other questions tagged thermodynamics entropy reversibility or ask your own question.

2
How does Fermi jump to this conclusion in Clausius inequality?