Can a pole balance on its end in a centrifuge?

Let us say you are in a giant bucket on the end of a long rope attached to a big motor spinning horizontally, swinging the bucket around fast enough that there is a force equivalent to 6 gravities pushing the contents of the bucket outwards. If I understand correctly, the bucket and rope would tilt outwards to an angle of about 75 degrees, balancing the outwards force with the downwards pull of gravity.

Could a pole balance if it was placed exactly perpendicular to the flat floor of the bucket? 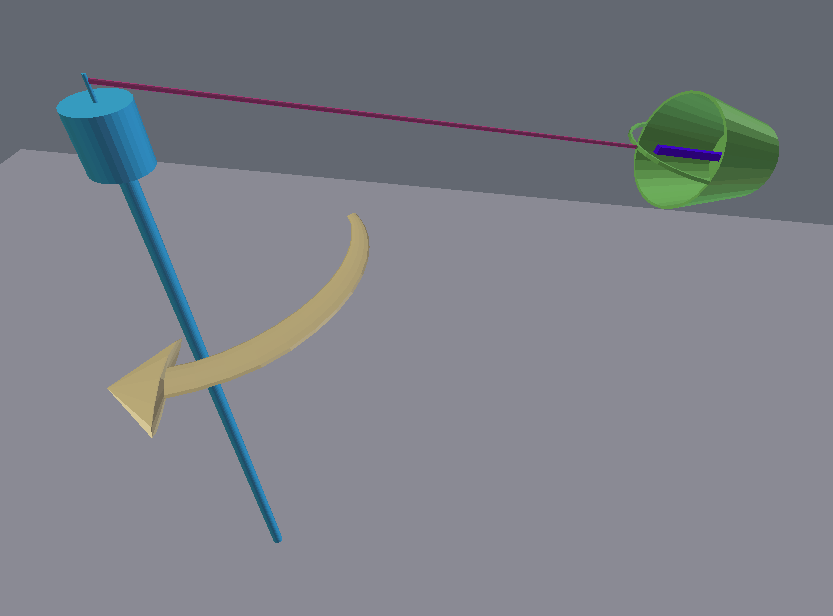 This is actually regarding a discussion about artificial gravity installations on the surface of the Moon. I contend a person could not move normally in a centrifuge simulating 1 g because the 1/6 g of the Moon would pull you off balance if you tried to stand up, you'd have to constantly compensate. The question I think boils down to the above question.

If the pole (or person) is very short in comparison to the radius of the centrifuge, then they will balance and walk as usual. Strange effects are noticeable in smaller centrifuges, though. A human standing in a 3.5 meter centrifuge on the moon would experience an acceleration on their upper body which would be about 0.6 g and at an angle compared to the 1g acceleration at their feet. So your contention is valid for relatively small centrifuges. My seat of the pants estimate for the case of a lunar centrifuge is that a human could stand with effort even in a very small centrifuge, but that the effect would be distracting while walking all the way up to around a 20 meter radius.

Gravity is equivalent to an acceleration in the opposite direction. There is no way of telling the difference. And two accelerations can be added as vectors.

The bucket can pivot about its handle and will align its axis with the direction of $\vec{g'}$, just as it aligns with $\vec{g}$ when hanging but not rotating. 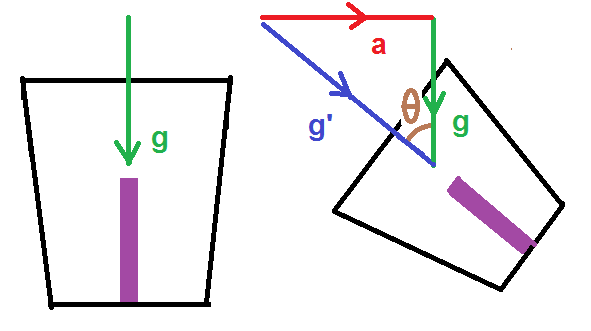 There are two relevant cases:

1. The rotation is in a horizontal plane

In this case, the pole would be able to balance (at least to the extent that that unstable equilibrium is possible on Earth to begin with, and adding on any vibrations or other imperfections of the motion), and artificial gravity would indeed work within those confines. The direction of this artificial gravity would be at an angle to both the surface and its normal, which might make for some awkward geometry when constructing the station, but there's nothing wrong with the principle ─ the (constant!) direction of the acceleration in the rotating frame would just be identified as the local version of "down" in that frame, and that's that.

(Or, at least, that's the case in the limit where the length $\ell$ of interest (the height of the pole and/or human) is much smaller than the radius $R$ of the centrifuge. If it's not, as pointed out by Duncan, then there will be noticeable variations in the outward acceleration (outward component of gravity) at different radii, which will mean that the local direction of 'down' (i.e. the direction of $\vec g$ in the rotating frame) will change from your feet to your head. That'll be nauseating and distracting, most likely, but you'll still be able to balance a rigid pole ─ the only change will be that the angle of equilibrium will depend on the pole's length, and you'll need to hold the base to stop it from slipping.)

2. The rotation is in a vertical plane,

I.e. the axis of rotation is horizontal. In this case, the pole would not be able to balance, because the acceleration due to gravity in the rotating frame would constantly oscillate, including phases where it points partly to the side (so the pole would topple).

Artificial gravity in such a situation might partly work, in the sense that you'd be held down to the ground, but anything that wasn't firmly held down would jitter around, and it would be extremely nauseating.

Not the answer you're looking for? Browse other questions tagged newtonian-mechanics newtonian-gravity rotational-dynamics centripetal-force or ask your own question.

2
Can I make a rod in the vertical plane move with its one end on the ground in a slanting position?
1
Space Elevator: how would you keep the end of a Space Elevator's cable rigid?
0
How to detect a Yo-Yo has hit the end of its string?
0
Centrifuge Artificial Gravity?
3
Tension in a ring rotating about its own axis
3
Elongation of a rod hinged at the end
0
What are all the forces a person is subjected to in a G force simulator centrifuge?
2
Would this be a correct explanation on denser molecules end up further away from axis of rotation in a centrifuge?
14
Can a bullet travel all the way around a centrifuge?