Liquid density as a function of pressure and temperature, how to model experimental data of $\rho(p,T)$?

I’m going to ask my question, explain the problem, show what I have done, and then re-state my question.

Question: How can one model liquid density as a function of pressure and temperature?

Explanation of the problem: The complexity of molecular interactions in liquids precludes development of a general analytical equation of state for liquids analogous to the ideal gas law. For this reason "equations" of state are normally ad hoc formulae based on curves fitted to experimentally measured values of density as functions of temperature and pressure, and possibly chemical factors. One such "equation of state" for liquid can be written as (Furbish, 1997*):

where the reference density $\rho_o$ is chosen so as to be in the midst of the range of densities likely to occur in the problem of interest. This is to ensure the coefficents $\alpha$ and $\beta$, defined with respect to $\rho_o$, are essentially constants over the associated ranges of $T$ and $p$. For clarification, $\alpha$ denotes a local isobaric coefficient of thermal expansion, defined by

and $\beta$ denotes a local isothermal compressibility, defined by

What I have done: The following table is density data of a pure liquid (as a function of pressure and temperature) acquired through a constant composition expansion experiment: 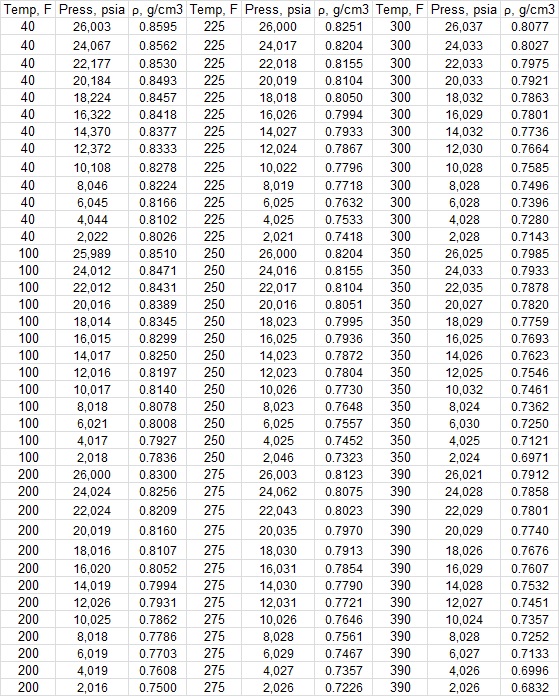 The figure below is a snapshot of this density data (as a function of $p$ and $T$): 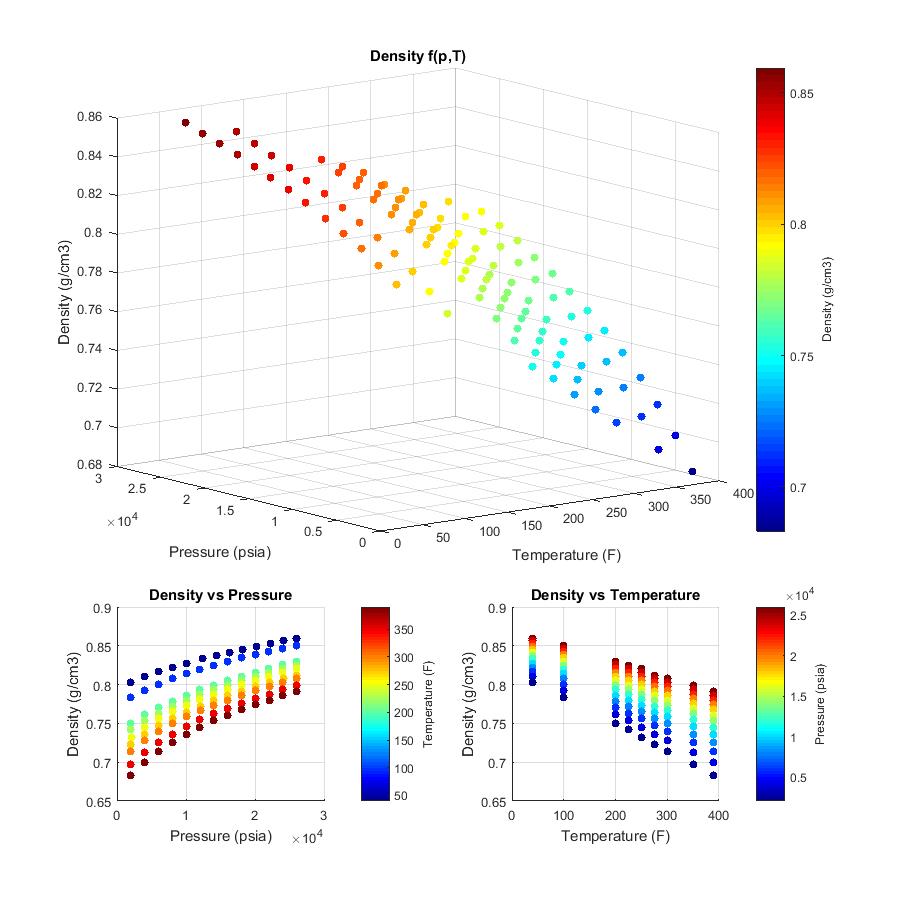 As a first step, I tried to create a model of this density data in the following manner: Looking at the left plot in the figure below, I first assumed that density increased linearly with pressure (although it is apparent that this is not true), and that this linearity holds for the varying temperatures (again, not true). Then, considering the plot on the right, which is a plot of the slopes, $m(T)$, of the linear trendfit lines relating $\rho$ to $p$ as a function of temperature, a polynomial trendfit was applied to this data of slopes (as a function of $T$), resulting in a 3rd-order polynomial:

Similarly, a curve can be fit to the data relating $\rho$ to $T$ for some pressure in the midst of the data set as shown in the figure below, here I chose $p=14063$ psia. This curve is approximated by a 3rd-order polynomial: 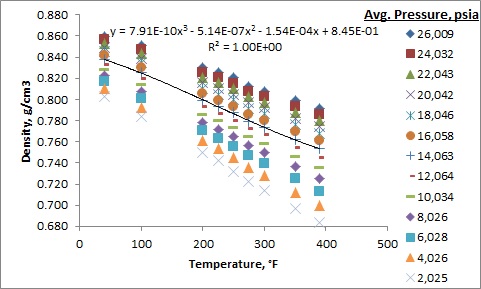 The accuracy of this equation to model the experimental data is summarized by the following two plots shown in the figure below. The left plot in the figure is the parity plot showing the quality of fit of the density values estimated using this model, Eqn (7), compared the experimental values. Looking at the plot to the right, the model does a good job estimating density for pressures near 14063 because of the method I used to model the equation.

But now, after explaining how I approached this problem (all credit to Furbish, 1997* for explaining this approach) and the assumptions/methods I used, I am hoping to get some feedback on how I might better model this experimental data. As Furbish noted, perhaps the most straightforward approach is to use some sort of multiple-regression technique to fit a function to the data, where the function $\rho(p,T)$ is envisioned as a surface over the $T$ and $p$ coordinates (this is something I am not knowledgeable about and would like to learn to do for this problem). But perhaps there is another way, for example, working with one of the liquid EOSs given on the wiki page.

Restating the question: So, how might one model liquid density as a function of pressure and temperature?

Using MS Excel's Solver, I attempted the approach Chester Miller had suggested. First, I performed a least squares minimization fit to the data using the functionality:

resulting in the following 5 parameters to the fit (rounding):

Using these parameters in Eqn (10)

its accuracy is summarized by the following two plots shown in the figure below.

Second, I performed a least squares minimization fit to the data using the functionality:

resulting in the following 8 parameters to the fit (rounding):

*note to perform this regression using Excel I had to divide my temperature and pressure values by 1000. The reason being that there are built-in numerical limits in Excel to represent small and large numbers.

its accuracy is summarized by the following two plots shown in the figure below.

When performing these regressions with MS Excel's Solver, I constrained the variables $\rho(T_o,p_o)$, $T_o$, and $p_o$ to be values no greater than or less than the maximum and minimum values of pressure, temperature, and density values of the experimental data set.

If you would like to have the excel document that I used to perform these regressions you can email me (see my profile). I am interested in any comments with regards to the goodness of fit of these two models.

I would do this very differently. Your Eqns. 2 and 3 suggest that a more appropriate form of functionality to start with would be $$\rho=\rho(T_0,P_0)\exp{[-\alpha(T-T_0)+\beta(P-P_0)]}\tag{1}$$or, equivalently, $$\ln{\rho}=\ln{\rho(T_0,P_0)}-\alpha(T-T_0)+\beta(P-P_0)\tag{2}$$ That is, I would work with the natural log of $\rho$ rather than $\rho$ itself. This should also go a long way to more nearly linearizing the behavior with temperature and pressure, and should also help to minimize the percentage errors in density (rather than the absolute errors).

As it stands, my Eqn. 2 represents a 5 parameter fit to the density data ($T_0$, $P_0$, $\rho(T_0,P_0)$, $\alpha$, and $\beta$). I would start out by doing a least squares minimization fit to all the data using this functionality. This would involve reasonable initial guesses for the 5 parameters appropriate, say, to the middle of the range of data.

Then, I would re-implement the least squares fit to find a new optimized set.

Even for extremely idealized system like a Lennard-Jones fluid there is no analytical equation of state available, and only (very complicated) empirical expressions which are valid in limited pressure and temperature ranges are available (see for example here).

Sure, you can fit $p(T,\rho)$ with a complex enough polynomial or with some other function, but the resulting expression will be valid only in the range of the data from which you obtained the fit. Also, to obtain a good fit you would probably be using a lot of parameters; however, as John von Neumann once said: "With four parameters I can fit an elephant, and with five I can make him wiggle his trunk". Given enough parameters, you can fit any data set to any functional form, but very little physical insight is obtained from such a procedure (in other words, would you be able to give a physical interpretation of all the parameters you are using?).

In conclusion, my suggestion is this: take data from the range of pressures and temperatures you are interested in and find whatever fits them best. You will thus have an empirical formula that works pretty well in that range (and only in that range!).

Not the answer you're looking for? Browse other questions tagged pressure temperature density models liquid-state or ask your own question.

2
Calculating air density lapse with altitude (specifically, pressures)
4
Where can I find a table for NIST standards on temperature and pressure?
1
Is there a simple equivalent to Ohm's law for gas (pressure$=R*$throughput)?
1
Pressure and altitude
1
How to implement Hubbert's potential to calculate permeability using Darcy's law?
1
When compressing liquid, how much energy is converted to increased temperature vs increased pressure?
0
Why is there a pressure difference of $h\rho g$ at the top of tube between inner and outer surface in capillary rise?